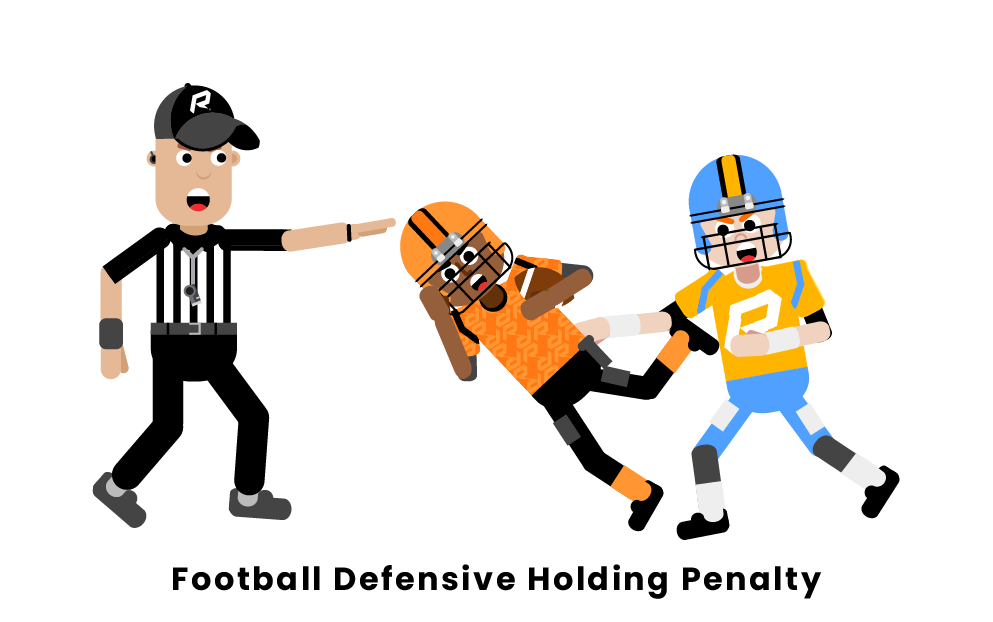 Defensive holding is one of several penalties in American Football that occur when a defensive player obstructs an offensive player from moving freely or safely. For a penalty to be called defensive holding, the defender must be grabbing or tackling a player who doesn't have possession of the ball, and is not actively an intended target of a pass.

Defensive holding penalties are most often seen either when a lineman is trying to stop an offensive player from making a block, or when a defender grabs hold of an eligible receiver running a route.

While not as costly a penalty as pass interference, holding penalties can extend drives much longer than they might have lasted, mostly because of the automatic first down that comes with defensive holding calls.

For example, if a team tries to convert a pass on third down but the pass is incomplete, they would normally have to either punt or try for a field goal. However, defensive holding, even on a player nowhere near the intended receiver, would give the offense a brand new set of downs to try and move downfield, extending the time of possession for the offensive team.

When defensive holding is called, the referee will throw their flag, and after the play will assign the penalty to the offending team. The signal for holding penalties is the right hand grasping the left wrist.

There are three common times when defensive holding will be called:

In all three cases in the NFL, the offense will get 5 yards and a fresh set of downs.

Horse Collar: With a horse collar penalty, the defender is actively trying to tackle somebody (usually the possessor of the ball) by grabbing hold of the back collar of the other player's shoulder pads. Horse collars result in 15 yards and a first down when committed by the defense.

Offensive Holding: Offensive holding occurs at mostly the same times and in the same ways as defensive holding penalties, but they are committed by the offense. Typically, a lineman will hold a defender to prevent them from sacking the quarterback or making a crucial tackle.