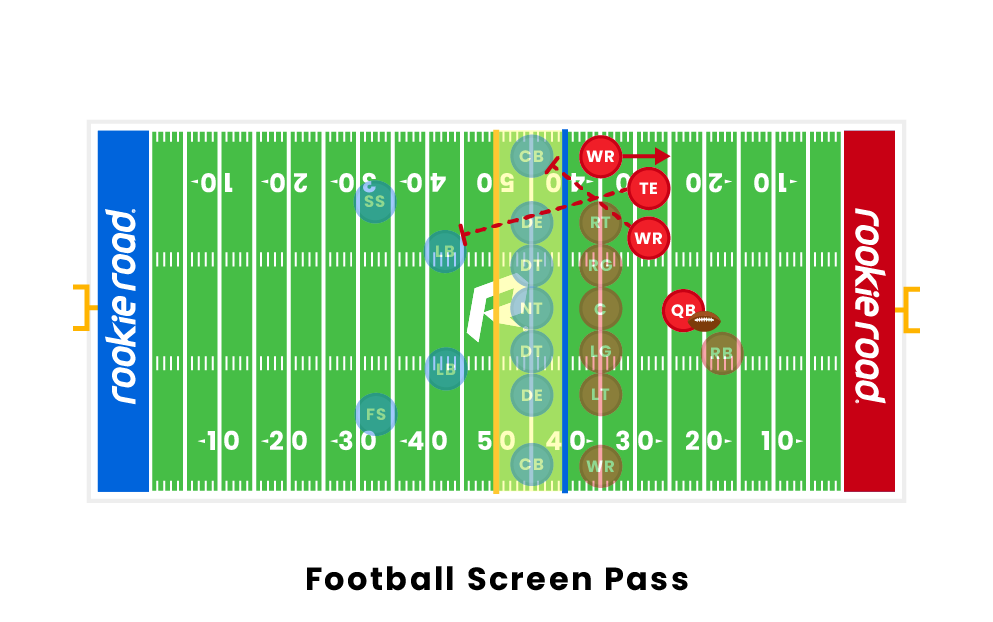 A screen pass in football is a play in which the play is disguised as a deep pass, but instead the ball is passed short to a receiver with blockers positioned in front of them. A screen pass typically starts with play-action or a pump fake by the quarterback who then throws a short ball either to the open running back or wide receiver. Some modern playbooks include tight end screens as the position has evolved out of a mostly blocking role.

The throw by the QB has to be very quick because the offensive linemen are not holding their block against the defensive linemen. Instead, they shift down the side of the field to position themselves to block for the running back/wide receiver/tight end as they catch the ball and get ready to run. The quarterback usually is throwing the ball while facing tremendous pressure from unblocked defensive linemen.

There is a chance that a screen pass will be thrown backward due to pressure from the defense or the nature of the play. In these situations, the receiver must be careful as a dropped pass would be a live fumbled ball rather than an incompletion.

At the start of the play, the QB will either fake handing it off to the running back or take a 3-5 step drop back and must deceive both the defensive linemen and secondary into thinking that he is about to attempt to throw the ball downfield. As the running back leaks out of the backfield, the linemen will leave their assignments and block for the back as he receives the ball from the quarterback.

Halfback screens are typically called when the QB might be facing an aggressive blitz by the defense. Although it is up to the running back to gain yards on this play call, both the QB and the offensive linemen have very important roles to play. The screen pass can become an easy interception if the QB does not sell it well.

A bubble screen is one of the most common types of screen passes. It constitutes an outside receiver lining up out wide before arching around to the quarterback as the ball is snapped. This allows both the linemen and other skilled position players to make blocks while giving the receiver an essential head start to gain momentum while making the catch.

What is a screen pass in football?

A screen pass in football is a short pass to a wide receiver or running back that is disguised as a deep pass and features a line of blockers in front of the ball carrier. The screen pass allows rushers in quickly toward the quarterback, moving them out of position to make a tackle on the receiver or defend a pass.

What is a bubble screen pass in football?

In football, a bubble screen is a specific type of screen pass in which an outside receiver lines up out wide before arching around to the quarterback as the ball is snapped. This formation allows the offensive linemen and other positions to make blocks while giving the outside receiver extra momentum as they make their catch.