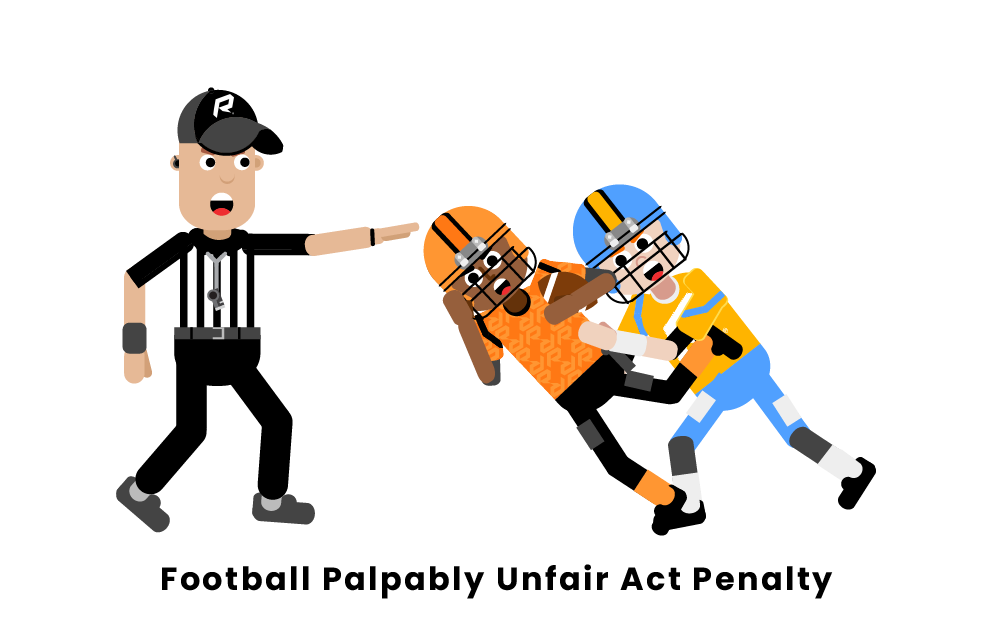 The palpably unfair act penalty in football is called when a team or player commits an illegal act that is not specifically covered in the rulebook but that illegally interferes with play. In these very uncommon cases, it is up to the game officials to determine if an action is against the rules, along with the accompanying punishment.

A palpably unfair act penalty in football is very rare and can be quite complicated. A palpably unfair act is any action that interferes with play in an illegal manner. When a player or member of the team personnel interferes with play in an unfair manner that is not specifically prohibited in the rulebook, the officials may use this rule to determine if the offending team should be penalized and the severity of the penalty. Officials may add time back to the game clock, award the opposing team with yardage or points, eject players from the game, or even force a team to forfeit the game.

This rule can be confusing for coaches, fans, and referees because there are multiple possible penalties for committing a palpably unfair act. According to the rulebook, an action is legal unless there is a particular rule that forbids the action. Therefore, officials will generally turn to the palpably unfair act only when a specified penalty for a violation is not severe enough to punish a given action.

The NFL rulebook refers to palpably unfair acts, but they are called by different names in other leagues. The NCAA rulebook calls them unfair acts, and the CFL refers to them as objectionable conduct.

The palpably unfair act penalty has never been called in an NFL game but was called in the 1954 Cotton Bowl, when Rice University’s running back, Dicky Moegle, was tackled by Alabama running back Tommy Lewis, who came off the bench on the sideline to make the tackle. Moegle had the potential to score a touchdown on the play, and since Lewis was not a defensive player on the field, the officials decided to award Rice with a touchdown.

Since the palpably unfair act is determined by the officiating crew and can apply to many different situations, the penalty at each level of play is not predetermined. However, there are guidelines for how this rule should be applied. The punishment will typically include ejection for the offending player, in addition to appropriate compensation for the opposing team. Thus, if a palpably unfair act prevented a gain of yardage, an appropriate yardage penalty will be awarded. Likewise, three points may be awarded for goaltending a field goal and six points for unfairly preventing a touchdown. 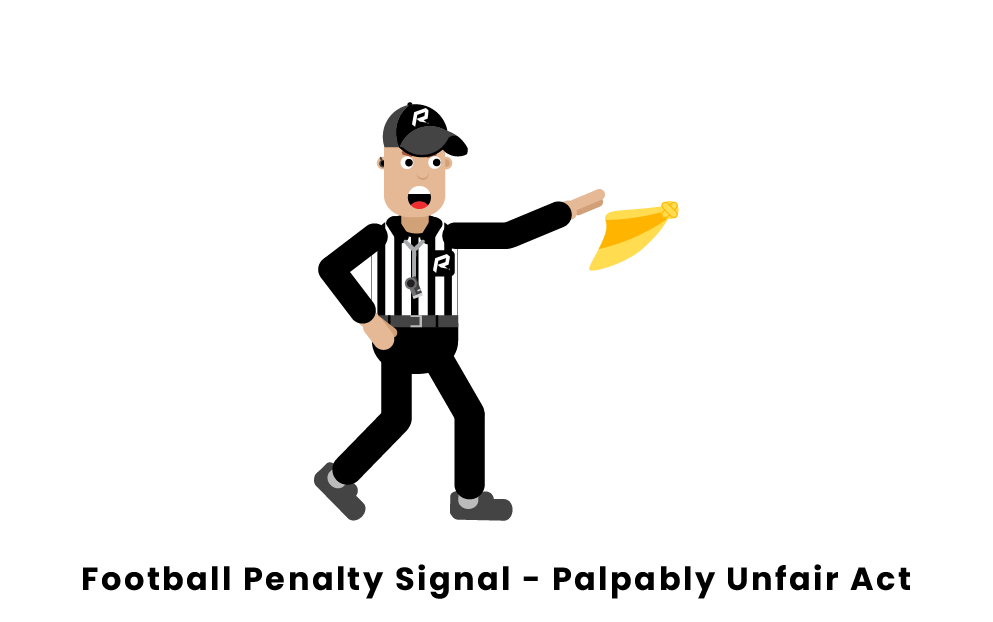 There is no set penalty signal for the palpably unfair act; therefore, the penalty signal will be for whatever penalty the referees decide to issue as a part of or in addition to the unfair act. For example, if a team is awarded a touchdown as a result of the penalty, the referee would hold both of their arms upright above their head. If a team is given a personal foul as a result of an unfair act, the referee will make the personal foul signal, which involves holding out the left arm and bringing the right arm down onto it in a chopping motion. Any other sort of penalty issued as part of the unfair act penalty would have its own unique signal.

What is a palpably unfair act in football?

A palpably unfair act in football is any action that interferes with play in a manner that is obviously against the rules or the spirit of the rules. Although theoretically, any interference could be considered palpably unfair, the rulebook lists some specific acts that would be considered as such, including goaltending a field goal, illegally interfering with a touchdown, and interference by a substitute who enters illegally during a live play.

Can a game be forfeited or overturned because of a palpably unfair act?

According to Rule 17 of the NFL Rulebook, which deals with unfair acts, it is possible for a game to be forfeited or overturned if an extremely unfair act occurs that extraordinarily impacts the outcome of a game. Typically, this judgment is left up to the Commissioner of the NFL, who will analyze the act and determine whether or not it was blatant enough to warrant a forfeiture or overturning of the game’s result. Other punishments that the Commissioner can impose for an unfair act include monetary fines, loss of draft picks, suspensions, and even demanding that the game in which the unfair act occurred be replayed at a later date.

What is the palpably unfair act rule in the NFL?