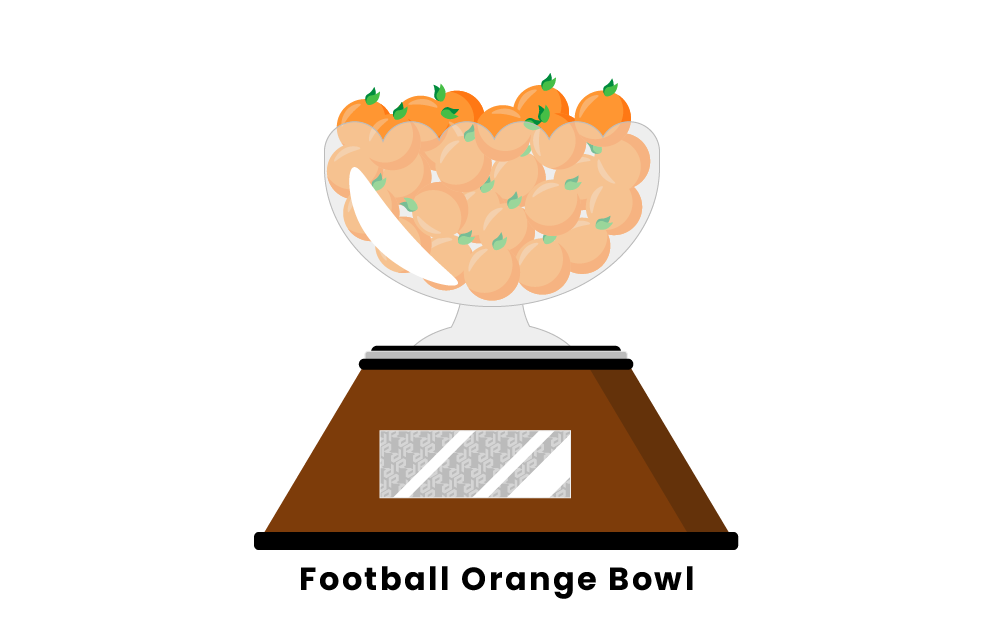 What is the Orange Bowl in Football?

The Orange Bowl, also known as the Capital One Orange Bowl, is an annual college football game. It is one of the New Year’s Six (NY6) Bowl Games, along with the Rose Bowl, Sugar Bowl, Cotton Bowl, Peach Bowl, and Fiesta Bowl. These bowl games are played on or around New Year’s Day, and are the top bowl games for the NCAA Division I Football Bowl Subdivision. The Orange Bowl typically features the top team from the ACC, though it is sometimes instead used for a College Football Playoff semifinal game.

The 2022 Orange Bowl will take place on December 30th, 2022, and will be played between the Clemson Tigers and the Tennessee Volunteers. The game will take place at 8:00 p.m. eastern standard time, at Hard Rock Stadium, in Miami, Florida. The least expensive tickets, including estimated fees, are around $120. Lower bowl seats, which are closer to the action, start at around $230 but can cost over $1000 for the very best seats.

The Capital One Orange Bowl typically features the best team in the ACC, excluding any ACC team that qualifies for the College Football Playoff, and a top opponent from either the Big Ten or SEC. The Orange Bowl has been branded as the “Home of the ACC Champion” since it became the bowl game for whoever wins the ACC in 2007.

The Orange Bowl has a long history, as it was created back in 1935. Two years before the first Orange Bowl, Miami hosted the Festival of Palms Bowl. This Festival of Palms game occurred twice in 1933 and 1934, though neither was recognized as an official bowl game. The two games saw University of Miami pitted against a non-local opponent at Moore Park in Miami. The popularity of these events led to the first ever Orange Bowl game, in 1935.

Why is it called the Orange Bowl?

It is not actually clear why it is called the Orange Bowl, but this annual contest has gone by that name since its creation in 1935. Currently, it is known for the large quantity of oranges that fill the trophy each year. The game’s full title is Capital One Orange Bowl, because the game is sponsored by the company Capital One. In the past, it was known as the FedEx Orange Bowl from 1998 to 2009, and the Discover Orange Bowl from 2010 to 2013.

When is the Orange Bowl?

Where is the Orange Bowl played?