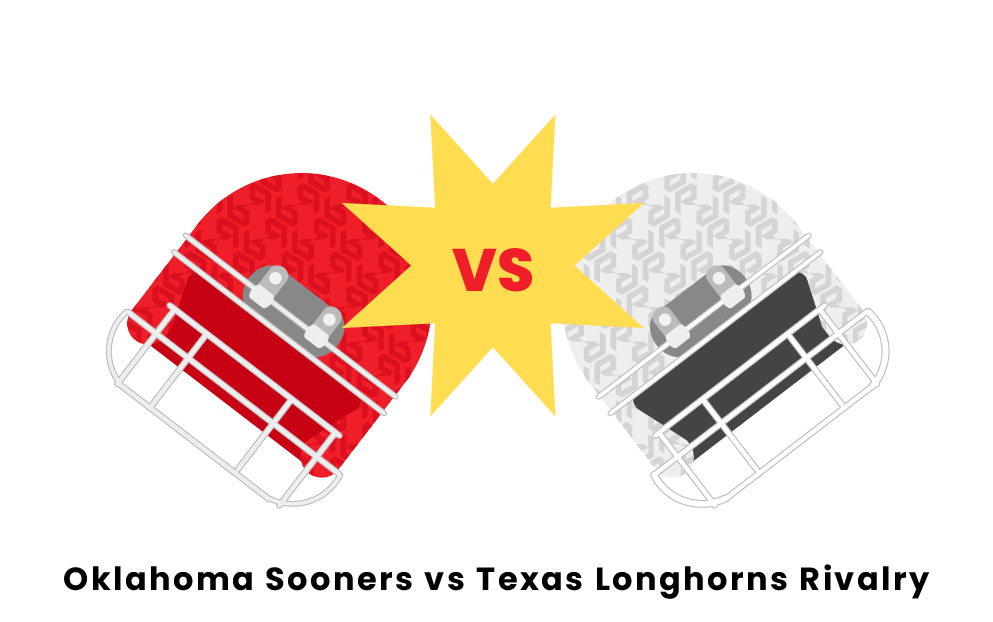 Among the many notable rivalries in NCAA College Football is the rivalry between the Oklahoma Sooners and the Texas Longhorns, also known as "the Red River Rivalry." These two teams have been battling it out for decades, and their matchups are known for rowdy fans, exciting games, and intense finishes, often including overtime faceoffs.

The rivalry between the Oklahoma Sooners and the Texas Longhorns is one of the many long-standing rivalries in the NCAA, beginning in 1912. In the decades that followed, many exciting games have been waged between the schools and the two meet at least once a season. The Sooners and the Longhorns have met two times in a season in three separate years: 1901, 1903, and 2018. The annual game takes place in Dallas, Texas, at the Cotton Bowl stadium and is not played on either team's campus. Though the overall edge in the rivalry has favored the Longhorns, many exciting games in which the Sooners have upset their rivals have occurred to keep the feud alive.

The long history of the rivalry has led to some very exciting moments. In 1958, after winning their last six games in a row against the Longhorns, No. 2 Oklahoma was defeated in a close 15-14 upset by Texas, whose coach, Darrell Royal, was a former Sooners quarterback. In 1963, the two teams met on the field as the NCAA's No. 1 and No. 2 teams, with Texas winning 28-7. Another famous moment involving Texas coach Darrell Royal occurred in 1976, when Royal accused Oklahoma's coach, Barry Switzer, of spying on Longhorns' practice sessions. Royal challenged Switzer and another supposed accomplice to take a lie-detector test to prove the allegations, promising to donate $10,000 to each man's charity of choice if they were acquitted. It was eventually proven that Oklahoma had spied on the Longhorns, but four years prior to the accusation. The 1976 game ended in a 6-6 tie and was Royal's final game at Texas.

Many other exciting moments like these have marked the intense rivalry between Oklahoma and Texas, some of the more important of which are listed below.

One of the most memorable games in the rivalry, this Sooners-Longhorns faceoff was marred by wind, rain, and slick fields, which hampered both teams' offenses. Texas led 10-0 at the half, but a Sooners comeback and a few major mistakes by Texas led to a 15-12 game on Texas' final drive. A monumental interception by Oklahoma's Keith Stanberry proved to be the deciding call of the game, as the interception was actually ruled to be an incomplete pass by officials on the field, despite contrary replay evidence. The blown call allowed Texas to score a tying field goal to end the game at 15-15, leaving Oklahoma coach Barry Switzer livid.

This game is remembered for its stirring Sooners victory, in which Oklahoma defeated Texas by a blowout score of 63-14. The major win for Oklahoma kicked off what the Sooners still refer to as "Red October," a month in which Oklahoma proceeded to defeat No. 2 Kansas State and No. 1 Nebraska before securing their seventh national championship. The game was notable for the performance of Oklahoma running back Quentin Griffin, who amassed 87 rushing yards, 45 receiving yards, and six touchdowns in the game.

In this year, the Sooners and the Longhorns met in the Big 12 Championship, with Oklahoma securing a 39-27 victory. This was the first-ever championship game meeting for these two rivals. The game was marked by many exciting plays, including an impressive one-handed catch by the Sooners' Grant Calcaterra, which led to an 18-yard scoring run on a third-and-10 play with only two minutes left in the game. The championship win was the Sooners' seventh consecutive victory that year and their fourth conference title in a row.

This game was notable for its stunning Oklahoma victory. After trailing 28-7 in the first quarter, the Sooners staged a massive comeback to earn a 55-48 victory over the Longhorns. The exciting game included a 66-yard running score on fourth-and-1 by Caleb Williams, the Sooners' freshman quarterback.

A College Football Hall of Famer, Bob Stoops served as the head coach of the Oklahoma Sooners for 17 seasons, earning a sterling record of 190 wins and 48 losses, along with one National Championship and ten Big 12 Championships. In the Sooners' rivalry against Texas, Stoops compiled a solid record, with 11 wins and seven losses to the Longhorns throughout his career, making him the winningest Oklahoma coach in the rivalry between the two schools. Stoops received two Walter Camp Coach of the Year Awards during his tenure. He retired from his position in 2017, but returned as the Sooners' interim head coach in 2021 after the departure of coach Lincoln Riley to USC.

One of the most influential Oklahoma head coaches, Bud Wilkinson presided over an incredible winning period for the Sooners. His team had a .826 winning percentage between 1947 and 1963, along with 14 league championships and three national championships. As the Oklahoma head coach, he was successful in the school's rivalry with the Texas Longhorns, winning nine games against Texas and losing eight. His Sooners won six out of their eight bowl games, and his coaching style was known for its meticulousness and its focus on recruiting aggressive, fast, and intelligent players.

Considered the most beloved head coach in Longhorns' history, Darrell Royal started out his football career by playing for Texas' rivals, the Sooners. Royal played quarterback for Oklahoma from 1946-1949 and also served as a punter, earning a university record for a 96-yard punt return in 1948. After leaving Oklahoma, Royal became the coach for Texas in 1957 and led the Longhorns to three National Championships, 11 Southwest Conference Championships, and 167 overall wins. As Texas' head coach, Royal led his team to 12 victories, seven losses, and one tie against the Oklahoma Sooners. He served as Texas' athletic director alongside his coaching duties starting in 1962, and continued his directorship for three years after retiring from coaching in 1976.

One of the more recent professional quarterbacks from Texas, Colt McCoy played for the Longhorns from 2005-2009, amassing 45 wins and 8 losses in his 53 career starting games. He formerly held the record for all-time NCAA quarterback wins, before being beaten by Boise State's Kellen Moore. Against the Oklahoma Sooners, McCoy had an impressive 3-1 record, also achieving a 66.9 completion percentage, close to 900 total yards, six passing touchdowns, and only two interceptions in his four games against Texas' hated rivals.

Why are Oklahoma and Texas football rivals?

Oklahoma and Texas are rivals due to their proximity as states and competition as part of the Big 12 Conference. The long-standing history between these two teams has led to a major rivalry between the schools. The rivalry has been kept alive by a number of decisive and important games over the years, along with numerous spats, and even allegations of spying. These intense feuds have ensured that the two teams will be division rivals for many years to come.

When did the rivalry between Texas and Oklahoma start?

The rivalry between Texas and Oklahoma began in the early 1900s, but seems to have officially begun around 1912. Over a century of rivalry, the two teams have met at least once a season, and have met twice in a season in three separate years: 1901, 1903, and 2018. Despite their many matchups, Oklahoma and Texas have only met in one National Championship, a 2018 faceoff that the Sooners won 39-27.

What is the Golden Hat?

The Golden Hat is a trophy exchanged between the Oklahoma Sooners and the Texas Longhorns, one of four trophies the rival teams exchange to symbolize their victories against each other. Originally "the Bronze Hat" upon its creation in 1941, the hat has been upgraded over the years, changing to a golden hat in the 1970s. The Golden Hat is traditionally exchanged between the two teams whenever one of them wins a rivalry game.