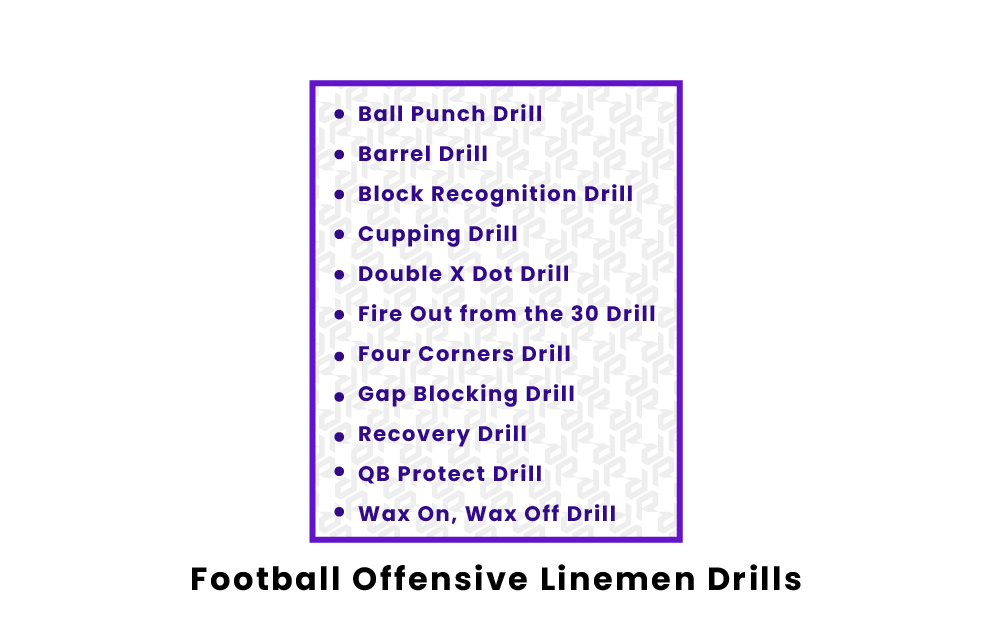 The ball punch drill has the lineman pick up a weighted ball and push it forward to a partner with both hands in a punching motion as if they were fending off a defensive lineman.

In this barrel drill, the lineman gets in the three-point stance and shoots up to punch the barrel directly in front of them. The goal is to move quickly and slide the barrel forward rather than push it over.

The cupping drill has linemen out on the line of scrimmage before falling back in a cup shape around the quarterback. They continue to move their feet in a quick up-and-down motion and put their hands out as if to punch the defense for the length of the drill.

In the double X dot drill, five spots or cones are set up in an X pattern, with four of the spots making up a square and the final spot placed in the center. The linemen jump from one spot to the next, always going through the middle spot.

Fire Out from the 30 Drill

The fire out from 30 drill is used with a number of linemen at once. Each player lines up in a three-point stance next to the other. On the coach’s signal, they each run ten yards and get back in the three-point stance. The first few to finish are done with the drill while the slower players have to continue. This is done until all players are finished.

Cones are set up in a square. Linemen start at the bottom right cone then sprint to the one in front of them. They perform a karaoke shuffle left to the next cone before backpedaling to the final cone. A final shuffle to the right brings them back to the first cone, completing a rep of the drill.

The QB protect drill uses a dummy or bag to represent the quarterback. One offensive lineman stands at either side of the dummy at the line of scrimmage while trying to fend off two defensive linemen for as long as they can.

Wax On, Wax Off Drill

What are the best offensive lineman drills?

What can I do to become a better offensive lineman?

The most important skills you can improve to become a better offensive lineman are stance, footwork, leverage, strength, and mental toughness. A proper stance and quick footwork are essential to winning the battle against your opposing defensive lineman. Physical strength will increase your effectiveness in this highly physical position. Leverage allows linemen to get the most out of their size by attacking opponents at the right angle. Mental toughness is key for this physical, aggressive position.