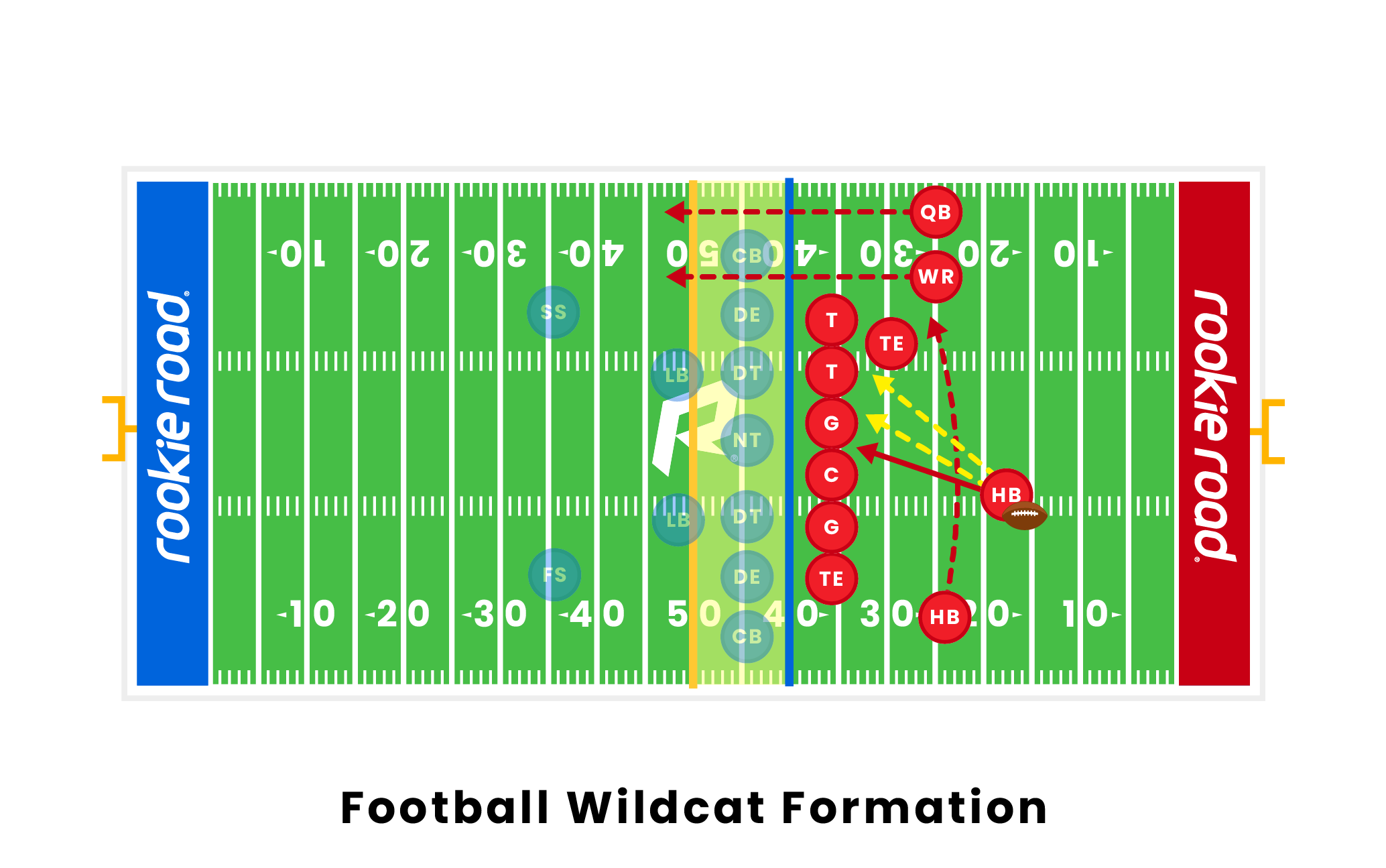 Have you ever heard of a football offense described as being in the wildcat? The rare trick play known as the wildcat formation is exciting and dynamic. It was created for confusing defenses and placing a good runner at the quarterback position, and it occasionally works. Keep reading to learn all about the wildcat formation and how it is used in the NFL today.

What is a Wildcat Formation in Football?

Players Involved in a Wildcat Formation

A typical wildcat play involves the center snapping the ball to the running back, who has lined up in the position normally occupied by the quarterback. However, several other positions can receive the snap in a wildcat play, including wide receivers. The quarterback, meanwhile, provides confusing misdirection while filling the role of a back or receiver. Here are all the players that may be involved in a wildcat formation:

The wildcat is effectively a trick play, and its primary purpose is to confuse defenses. By shifting the role of offensive leader to a player other than the quarterback, defenders can miss their assignments or be delayed, providing the offense with the element of surprise.

Part of the wildcat’s effectiveness lies in its rarity. It is most successful when a defense truly is not expecting it. The wildcat saw a surge in popularity in the NFL in 2008, when the Miami Dolphins started using it to good effect. However, the surge quickly ended. Once defenses knew to look out for the wildcat, it was easily recognized and defeated. Today, the wildcat remains a seldom-seen play in the NFL, making it an effective choice when an offense is seeking surprise and confusion.

Like any offensive play, the wildcat formation has strengths and weaknesses. Keep reading for a few of each:

Wildcat often relies on using a number of misdirection tactics, including motions before the play, read options, and draws. Wildcat typically puts the best runners in the backfield and makes the defense spread themselves thin. For example, a wildcat play that includes a jet motion forces the defense to be wary of an outside run, but the wildcat quarterback is still a threat for a backside run. This forces the defense to leave an end watching the backside, but often the linebackers will shift for the motion, creating a gap up the middle of the play for the quarterback to run a draw through. The idea is that wildcat forces the defense to respect every threat.

Some wildcat offenses have shown versatility in offering pass plays. An example of this is the Philadelphia Eagles’ trick play against the New England Patriots in Super Bowl LII. The play, referred to as the “Philly Special,” was run on a fouth-and-goal situation and saw running back Corey Clement take the snap, then pitch to tight end Trey Burton on a supposed reverse. Rather than run the ball, however, Burton passed the ball to quarterback Nick Foles who successfully caught the pass for a touchdown. Many other wildcat passes exist that rely on less intricate play design, but the central theme of misdirection remains.

Wildcat is a pretty novel formation, all things considered. It’s easily countered by a well disciplined defense. Realistically, most teams won’t run the wildcat offense for a prolonged period of time unless their quarterback is terrible. The last team that ran a considerable amount of wildcat was the 2008 Miami Dolphins. While the formation saw early success, its prolonged overuse allowed the other team’s defense to adequately prepare. This is true at any level. Effectively, if a defense wants to stop a wildcat offense, they simply have to be prepared for it to occur like any other trick play.

What is a wildcat offense in football?

A wildcat formation is a unique type of play in football and refers to any play in which the ball is not snapped to the quarterback but to another offensive player. Wildcat offenses are meant to confuse the defense by capitalizing on their expectation that the ball will be snapped to the quarterback. A wildcat offense can be a good way to shake up the defense, but in order to maintain its element of surprise, it is used sparingly as a trick play.

What defensive scheme works best against a wildcat play?

Generally, the simplest way to defend against a wildcat offense is to have the middle linebacker on the defense call an audible and switch to a blitz tactic. Since wildcat offenses snap the ball to a running back, the defense must quickly reevaluate and bring heavy pressure on the offense. Having linebackers blitz inside while the safeties and cornerbacks go man-to-man on receivers and tight ends can hopefully fill in the gaps on the defensive line.

Is the wildcat formation popular in the NFL?

While the wildcat offense was used more often throughout the history of the NFL, and enjoyed a brief period of popularity in the late 2000s, it has largely fallen out of use in the modern NFL. Part of the reason for the formation being used less is that the team which used it the most, the 2008 Miami Dolphins, who used the wildcat often enough to make it predictable. Another reason for the change is that there are very few offenses that have players with the capability of executing a wildcat offense.