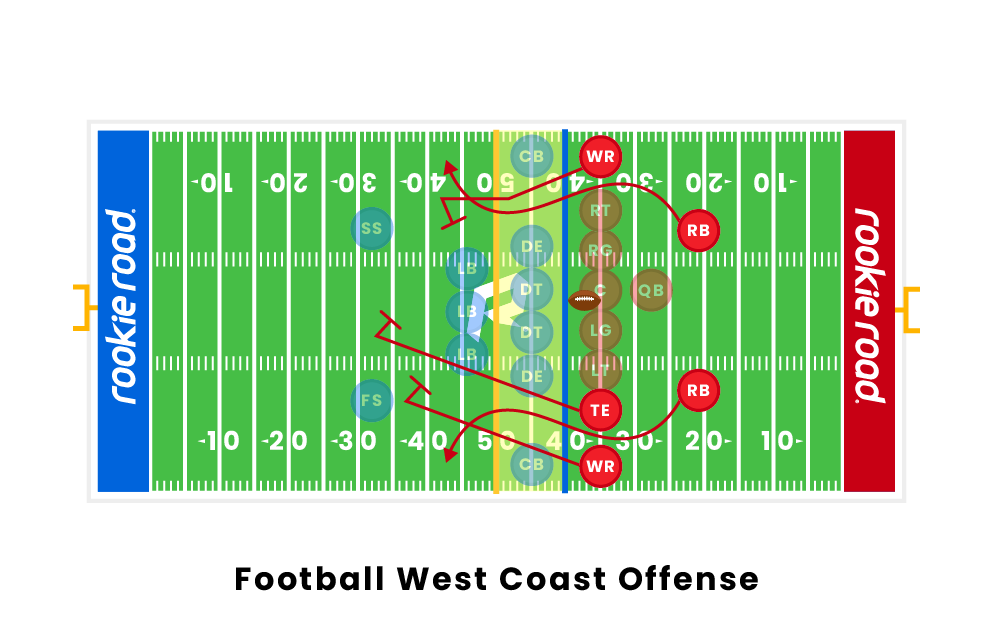 What Is the West Coast Offense?

The West Coast Offense, or WCO, prioritizes passing over running. A WCO relies on a short and quick passing attack and very select running plays. It is based on controlling the tempo of the game, moving quickly to tire out the defense, and (at the time of its creation) untraditional routes and motions on the line.

How Did the West Coast Offense Start in the NFL?

How Does West Coast Offense Work?

The West Coast Offense is grounded in its formation and three to five-step dropbacks by the quarterback. These three-step and five-step drops are now a routine in today's game. A WCO utilizes running backs and tight ends as receivers. Running backs and tight ends either come out of the backfield running swing or curl/hitch routes, or they join the wide receivers and everyone spreads out wide across the line. WCO uses multiple backs behind the line of scrimmage.

These short routes are synchronized to match the quarterback’s dropbacks, which enables short and easy completions that are perfectly timed. This aggressive passing attack puts the defense on its heels which allows for a running game based in trap, counter, and toss plays to develop. Once the defense is forced to play the run, now comes a significant play design that came out of WCO called “play-pass” or play action. The play-action pass is the best call against the most disciplined defense, Walsh believed. All of the sudden, three to five-yard completions and short running plays open up the possibility for a huge play downfield.

These different elements and play calls, although varied in their execution, are manageable for quarterbacks and coordinators to implement. Walsh only ran the same few plays during the course of the game. The same formation and speed make it challenging for opposing defenses to catch on.

Several teams in today’s NFL use the West Coast scheme. Andy Reid has implemented his own WCO in Kansas City with the Chiefs, who in 2018 were the NFL’s number-one scoring offense and whose quarterback Patrick Mahomes threw for over 5,000 passing yards and 50 touchdowns. Another current powerhouse team that uses the WCO is the Los Angeles Rams, who, led by coach Sean McVay, won the 2022 Super Bowl. The other NFL teams currently using a West Coast offense are the San Francisco 49er, the Green Bay Packers, and the New York Jets.