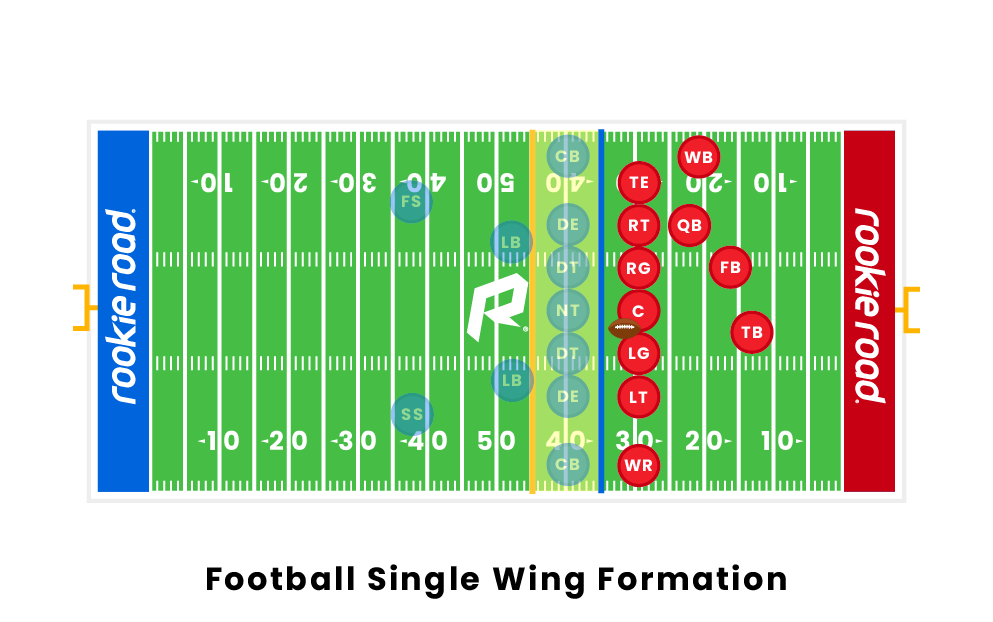 What is a Single Wing Formation In Football?

A single wing formation is one that features a long snap that is tossed rather than handed. The single wing is the play upon which the modern shotgun and spread offenses are based.

The single wing is the first offensive formation in football history. It was developed by legendary coach Pop Warner in the early 1900s. The goal of the single wing was to give star player Jim Thorpe more control over the field, as the single wing provides blocking, running, and passing benefits.

The single wing was popular from its inception in the early 1900s all the way through the 1940s and 1950s. It relied on blocking patterns to open up angles for the ball carrier, whether that was the tailback, fullback, quarterback, or wingback. It also gave the tailback more passing options than the T formation, which was popular at the time.

An important thing to understand about the single wing is that positions were not as defined as they are in today’s game. The quarterback rarely receives the snap in a single wing, for example. Instead, the quarterback lines up behind the first tackle on the strong side while the tailback or fullback takes the snap from the center.

The single wing is based around an unbalanced offensive line that very clearly defines a strong and weak side of the formation. This includes one guard, two tackles, an end, and a wingback on the strong side, with a guard and end on the weak side. The wingback lines up on the strong side of the offense, outside of the outside tackle and a few yards behind the line of scrimmage.

Pros of the Single Wing Formation

Much of football’s early offensive strategy involved physically overpowering the opposing defense. The single wing was the first of its kind in that it was built to confuse the defense, putting players in motion and using misdirections and fakes to conceal plays as they developed. The ability to confuse the defense is the biggest strength of the single wing formation, as it can create an opening where an offense is struggling to create an opportunity. The single wing can take some of the scoring burdens off the quarterback if your team lacks a talented player in that position.

Cons of the Single Wing Formation

A major disadvantage of a single wing formation is that it relies on all members of the offense to make and execute their blocking assignments. A single missed block can ruin the entire play. Also, the single wing under-utilizes the quarterback and wide receivers, so you may not want to run this play if you have skilled players in those positions. The single wing relies on size and physicality at the line, so teams should avoid this formation when their offensive line is outmatched.