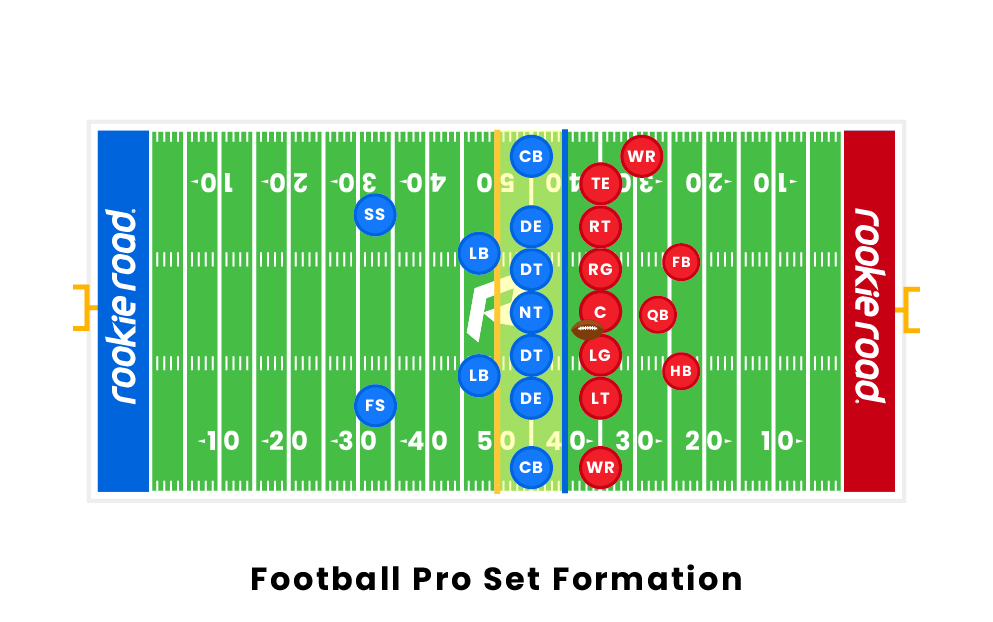 What is a Pro Set Formation?

A pro set formation is an offensive formation in which two running backs are split behind the quarterback and a wide receiver is on either side of the offensive line. The running backs typically line up over the B gap on either side of the center. Pro set offense is also commonly referred to as split backs. In this particular formation, the quarterback takes the snap under center. There also exists a number of variations including spread or two tight end sets.

Pro set is a great formation for a run-heavy offense with two good running backs and a quick offensive line. It relies on a lot of misdirection and pulling plays to gain yardage. More specifically, pro set is a formation primed for counters, read options, and ISO plays.

The counters, simply enough, involve establishing a zone block to make it look like the handoff is going to one side, then having the second running back make a cutback in the opposite direction.

Pro set read options, much like a read option in any other formation, entails a play that has multiple outcomes. For example, in a triple option blast play, the quarterback could hand the ball off to one running back, pitch the ball to the other running back on a sweep, or keep the ball himself and run an off tackle play. This often involves reading one or more defensive players, usually the end or outside linebacker.

Lastly, iso plays involve isolating one defender and utilizing one of the running backs as a lead blocker who’ll take the iso man head on. These plays rely on much less misdirection than the other two archetypes, but they succeed thanks to their powerful blocking schemes.

The biggest disadvantage of the pro set offense is its reliance on zone blocking over man-to-man blocking. This emphasis on zone blocking that can be easily exploited by quick inside linebackers.

The direction the middle linebacker goes is determined by the first step taken by the center after the snap. This strategy takes away most inside run plays, and helps stop the rest of the run game by relying only on a couple of disciplined ends and outside linebackers who read the ball and the offensive linemen. A good end will stay home in anticipation of a counter, and linebackers who are keen on iso plays will move up to fill the hole before the lead blocker makes it to the line of scrimmage.

Once the run game is shut down, so is the pro set offense for the most part. Like most two running back formations, a pro set sacrifices a diverse pass game for a strong run game. This means that once the run game fails, it’s time to change formation.

Are the split back and pro set formations the same?

The split backs and pro set formations are the same. The pro set/split back formation features two running backs, one on either side of the quarterback. This formation sets up for read options and passes in the flats, along with trick plays that will confuse the defense.

What is a split backs formation in football?

In football, a split backs formation is another common name for a pro set formation. It is an offensive formation where the quarterback lines up behind the center, there are two running backs behind that quarterback, and then there are two wide receivers at the line of scrimmage on either end of the offensive line.