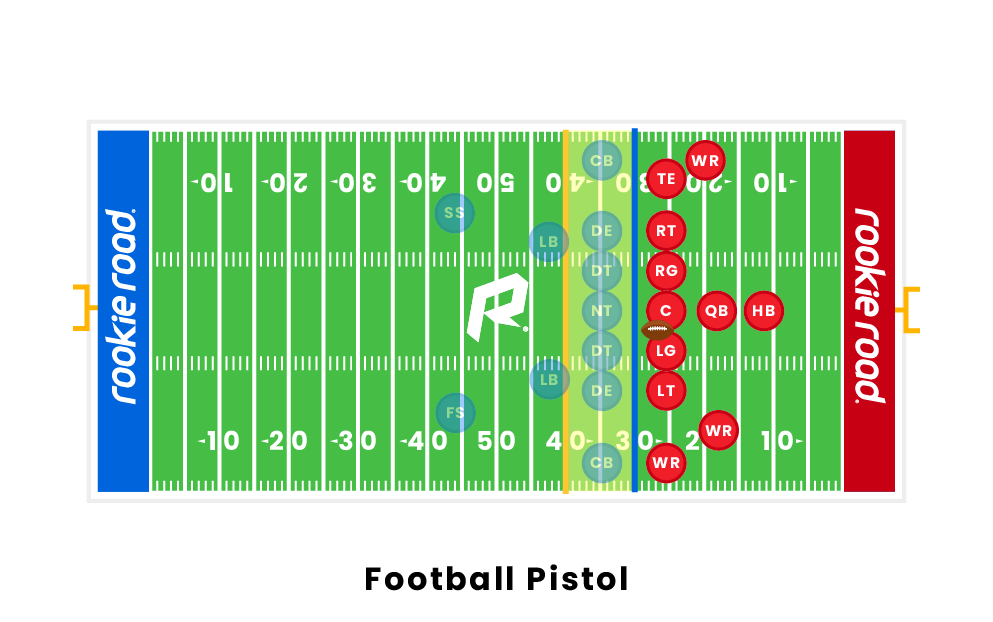 What is a Pistol Formation in Football?

The pistol formation’s main advantage lies in the versatility that comes from its hybrid design. Having the quarterback three yards deep allows him to make downfield reads separate himself from the pass rush by a few yards. Having the halfback five yards deep and directly behind the quarterback allows him to build momentum before taking a handoff.

Additionally, the pistol’s alignment strongly supports read option plays. In this scheme, plays are not written as passes or runs. Instead, the quarterback watches the defense to decide which play will see the most success. For example, the tight end may run a slant route while the running back comes down to take a handoff. If the linebackers come down to anticipate runs, the quarterback would pull the ball and throw the slant. If the linebackers hold off to cover the tight end, then the quarterback can just hand the ball off.

Since the pistol formation is so dependent upon the quarterback being able to quickly analyze defenses and make smart decisions, it comes with a steep learning curve for the position. Additionally, when a defense plays solid man coverage on the receivers, it takes away most if not all of the passing game, leaving little for the offense to employ other than play action passes.

Ultimately, a solid pistol offense doesn’t have many weaknesses or disadvantages. That’s why it is so prevalent in today’s college and professional settings. Teams with dual threat quarterbacks like Lamar Jackson and Colin Kaepernick particularly thrived in pistol formation, and with the large focus on passing offenses, pistol formation will undoubtedly continue to excel as it is refined.