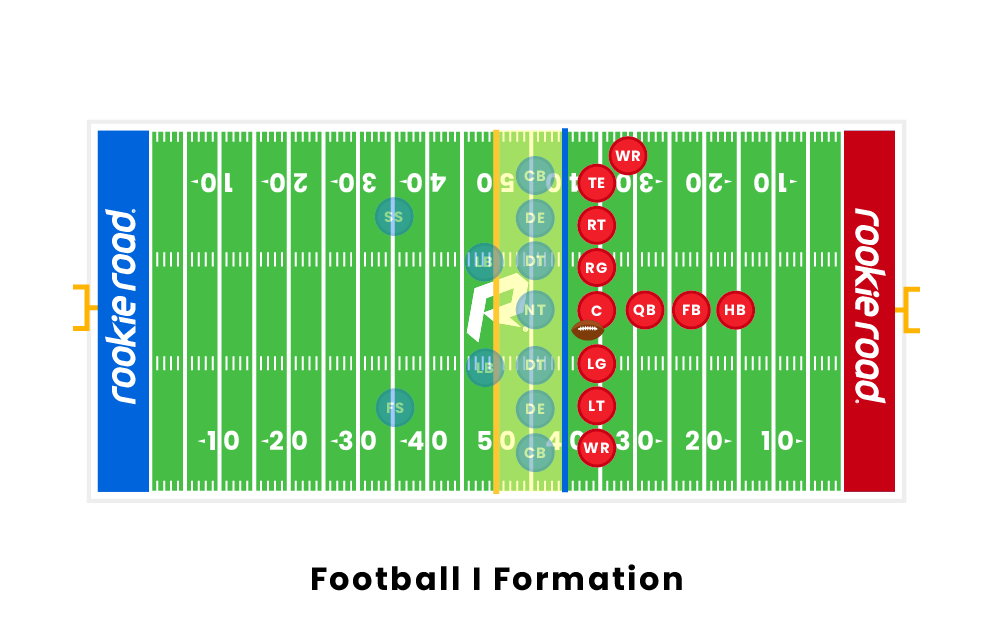 What is the I formation in football?

The I formation in football is an offensive formation in which the quarterback stands behind the center and two other running backs stand in a line behind the quarterback. This is an offense primed for running, but it can also feature a receiver split from the formation on either side of the ball. The I form can vary even further to include double tight ends, slight shifts in the halfback’s alignment, or even a three wide where the tight end is traded for a slot receiver. Plays using an I formation haven't been nearly as common in the NFL in recent years, but they still frequent college and high school playbooks.

The I formation is a classic formation centered on powerful run plays. It’s very much an in-your-face style offense with little misdirection. The halfback is the workhorse of this offense: his deeper alignment gives him the ability to identify weaknesses in the defense before the snap of the ball and then exploit them once they are handed the ball. The fullback plays a pivotal role in blocking for the halfback, often taking on stout linebackers to help the halfback get extra yardage. This lead block will often happen on what’s referred to as an iso, or isolation play.

These plays focus on covering all defensive linemen and all but one linebacker. This final linebacker is the man the offense wants to “isolate,” and it is the responsibility of the fullback to meet this defender in the hole. The I formation also holds great utility in other short run plays such as traps or even the occasional direct hand off to the fullback.

Due to its number of variations, the I formation can prove a formidable formation for some short passing games. Simple slant or hitch plays can work excellently in this formation, especially when the defense has loaded the box to account for a run play. These pass plays add the necessary shift that forces a defense to respect the run, while never being able to overcommit in anticipation. This also sets up especially well for play action runs.

The I formation is also great for power running. With little room for misdirection, the power of the I formation comes from its lopsided emphasis on running. Both running backs lined up behind the quarterback are primed to quickly catch the ball and push for as much yardage as they can.

The I formation’s main disadvantages thus come from its predictability and lack of varied play design or misdirection. The formation is so lopsided that the defense knows exactly where to focus its counterattack efforts. This is why the I formation is used less in the NFL, which often requires more unexpected plays and variation than in high school football and much of the NCAA.

The passing in an I-formation is also extremely limited. Long passes do not work well in the I formation, and even short passes only work when the run game has been well-established. The 52 defense serves well to mitigate the gains from the I formation. This holds true for all formations that put seven or eight men in the box at one time. The congestion makes it difficult for running backs to gain more than a yard or two per play, making first down conversion tough.

What is the I formation in football?

What are the advantages of the I formation?

The main advantages of the I formation are its power running potential and its use for short passing plays. This offensive formation is a classic and straightforward scheme in which they focus the bulk of the offense’s energy on setting up the full back and the half back for success. From their vantage point, it is much easier to quickly pass or run the ball as soon as the quarterback receives the snap.

What are the disadvantages of the I formation?

The main disadvantages of the I formation are its limited long passing potential and its lack of misdirection. While this offensive scheme is great for power running and short pass plays, long passes are nearly impossible because the running backs are placed so far backfield. Also, like any lopsided offense, the I formation does not have much chance of misdirecting the defense since most of their power is clearly placed in the same narrow region.