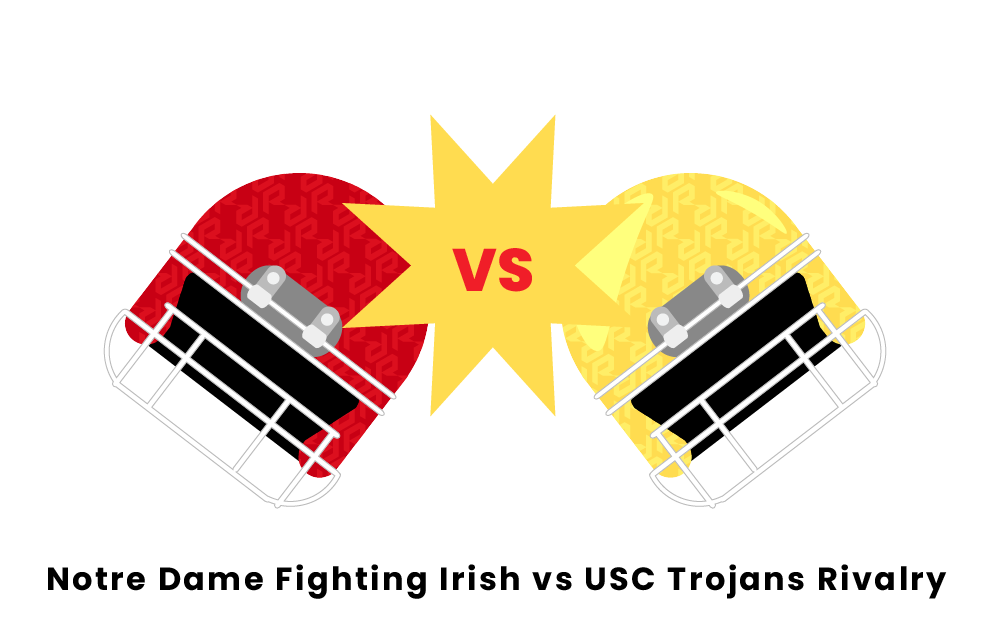 Rivalries are an important aspect of NCAA football, which is the second-most popular sport in the United States, boasting over 47 million attending fans and generating more than $4 billion in revenue each year. Among the many school rivalries that have captured college football fans’ hearts, the feud between the Notre Dame Fighting Irish and the USC Trojans has a long and storied history, dating all the way back to the early 1900s and continuing to draw massive crowds today.

The rivalry between the Notre Dame Fighting Irish and the USC Trojans has a long history. The feud between the two schools began in 1926, at a time when very few schools in the Midwestern United States were willing to play football against Notre Dame. Since they had so few opponents nearby, the Notre Dame team was often forced to travel to other schools across the country by train to play football. Two different stories claim to be the origin of the Notre Dame-USC rivalry. The first states that the two teams got the idea to play each other when their head coaches’ wives met at a social event and became friends. The second story suggests that the two teams played each other because they both believed it would benefit college football as a whole.

The first Notre Dame-USC game kicked off on December 4, 1926, leading to a 13-12 Notre Dame victory. Since then, the Trojans and the Fighting Irish have faced off every year, except for a three-year hiatus during World War II, and more recently, in the year 2020, during the events of the COVID-19 pandemic.

In their long history of matchups, both teams have had some stunning moments and have fostered major talents who went on to play in the National Football League. For example, the Trojans are well-known for being the college team of famed NFL tailback OJ Simpson, who played his first-ever game for USC against Notre Dame on October 14, 1967. He ran for 160 yards and scored three touchdowns in the second half to help his team defeat the Fighting Irish.

A notable event in October of 1971 involved USC quarterback Jimmy Jones being hit and fumbling the ball, which led to a massive scrum and a fistfight between the two teams that took 20 minutes to settle down. Many other exciting moments have marked the history of this great rivalry, including some mentioned below.

This pivotal game is known to all Notre Dame fans as the “Green Jersey Game.” After two three-loss seasons and one loss in the current season, Notre Dame head coach Dan Devine was under pressure to turn the fortunes of Notre Dame around when facing down No. 5 USC, and he came up with an ingenious plan to boost his team’s morale. After warming up in their traditional blue and gold jerseys, the Notre Dame team returned to their locker room to find brand-new, bright green jerseys hanging in their lockers. The team walked out onto the field in those green jerseys, behind a Trojan Horse pulled by toga-wearing students, and the Notre Dame crowd went wild. The Fighting Irish, led by famed quarterback Joe Montana, dominated USC 49-19.

Widely considered to be one of the greatest college football games ever played, the battle between Notre Dame and USC on October 15, 2005, saw the Fighting Irish once again wearing green jerseys in the hopes of securing a major victory. Both teams played near-perfect offensive games, leading to a 28-24 USC lead as the clock was winding down. Notre Dame responded with a touchdown of their own, making the score 31-28. However, USC came back with two minutes on the clock. After an intense drive that involved a near fourth down loss, a huge completed pass, and the infamous “Bush Push” of running back Reggie Bush into the Irish end zone, USC held out to win the game 34-31, securing an undefeated season.

Another famous game in the Irish-Trojans rivalry, this faceoff in 2017 was a humiliating 49-14 defeat for USC. Plagued by turnovers in the first half, the Trojans were down four touchdowns by halftime, with a score of 28-0. Turnovers had proven to be a huge problem for the USC team that year, which was led by quarterback Sam Darnold, who threw an interception to Notre Dame in the second quarter. By contrast, the Fighting Irish dominated the game, gaining 497 total yards, 377 of which were rushing yards. The 49-14 win against USC proved to be the most points Notre Dame had scored against them since the famed Green Jersey Game of 1977.

Brian Kelly is noted for being Notre Dame’s winningest head coach in program history. With a total of 113 wins at Notre Dame, Kelly compiled a total overall record of 113-40 during his tenure as the head coach for the Fighting Irish before abruptly leaving his post to become the head coach at LSU in 2021.

Famed NCAA and NFL coach Pete Carroll joined the Trojans in 2001, after coaching the NFL’s New England Patriots from 1997-1999. In his nine-year tenure as USC’s head coach, Carroll earned a fantastic 97-19 record for the team, only losing nine games between 2002 and 2008. Carroll also reached 50 wins faster than any head coach in Trojan’s history, produced three Heisman Trophy winners in four years, and helped launch the careers of 53 NFL draft picks. In 2010, Carroll left USC to coach the NFL’s Seattle Seahawks.

While playing for USC, Reggie Bush cemented himself as a rising star in the football world, earning numerous awards, including the Doak Walter and Walter Camp Awards. On the field, he earned 3,087 career rushing yards with USC, averaging 7.4 yards per carry, and racked up 89 career receptions, the 19th-best in USC’s history. He also earned 1,420 kickoff return yards and 559 punt return yards, the second and fifth-place USC records for those respective statistics.  Bush was part of the famous “Bush Push'' play of 2005, which helped USC win against Notre Dame.

One of the most famous quarterbacks in NFL history, Joe Montana, also known as “the Comeback Kid,” got his start at Notre Dame. He played for the Fighting Irish for five years, longer than many college players, participating in the famed Green Jersey Game of 1977 and winning a national championship the same year. After leaving Notre Dame for the NFL, Montana went on to have a storied career with the San Francisco 49ers, playing with them from 1979-1992, winning four Super Bowls and earning three Super Bowl MVP Awards.

Why are Notre Dame and USC rivals?

Notre Dame and USC are notable rivals in the college football world, and are two of the most well-known and well-performing NCAA football teams. The two teams have a rivalry that stemmed from the early days of playing together when Notre Dame could not find many teams to play against. After beginning their rivalry, the two teams went on to play in many spectacular games, employing well-known head coaches and spawning many future NFL players, including Joe Montana, OJ Simpson, and Reggie Bush, as well as famous coaches such as Pete Carroll.

When did the rivalry between Notre Dame and USC start?

The rivalry between Notre Dame and USC began in 1926. The nature of its beginning is disputed, with some saying that the two teams chose to play each other after their head coach’s wives formed a friendship, while others suggesting that the decision was made to bring more excitement to college football. During their first meeting in December 1926, Notre Dame beat USC 13-12, and thus the rivalry began, leading to many great moments in the decades following.

What is the Jeweled Shillelagh?

The Jeweled Shillelagh is a trophy exchanged between the Notre Dame and USC teams each year, depending upon who wins their annual matchups. A shillelagh (pronounced “shuh-LAY-lee”) is an ancient form of war club used by Gaelic warriors, the ancestors of the Irish People, whom Notre Dame is named after. The Jeweled Shillelagh is a foot-long club adorned with various medallions: ruby-covered Trojan heads are marked with the years and game scores of each of USC’s victories over Notre Dame, while Notre Dame’s victories over USC are marked by emerald-covered shamrocks. After each annual game between the two teams, the winning school earns the right to keep the shillelagh for the following year.