What Is The Super Bowl? 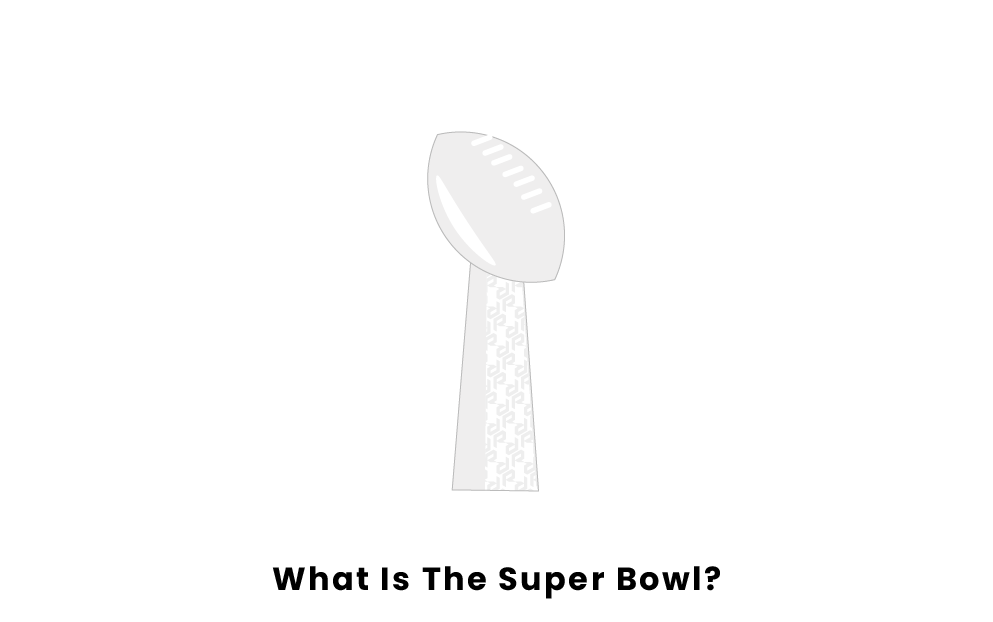 The name “Super Bowl” is among the most famous names in all of sports, and few sports fans are unaware of the importance of this game. Most people know that the Super Bowl is a football game, but what exactly is it? Which teams play in it? What are the rules of the game? How do things like commercials and halftime work at the Super Bowl? Read on for a comprehensive overview of exactly what the Super Bowl is and looks like each year!

What is the Super Bowl?

The Super Bowl has been played once every year since 1967. The winner receives the Vince Lombardi Trophy, named after coach Vince Lombardi, who won the first two Super Bowls. Two teams are tied for the most Super Bowl victories: the New England Patriots and Pittsburgh Steelers have both won six Super Bowls. There are only four NFL teams that have never been to a Super Bowl: the Cleveland Browns, Detroit Lions, Houston Texans, and the Jacksonville Jaguars.

The Super Bowl takes place on the second Sunday in February. The game is played at a neutral site chosen prior to the beginning of the season.

How Do Football Teams Make It to the Super Bowl?

What are the Rules of the Super Bowl?

For the most part, the NFL Super Bowl has the same rules as during the regular season. There are several small differences, however, which we’ll talk about here.

Firstly, the Super Bowl is not played at the stadium of the home team or the away team but rather at a neutral location that is chosen before the beginning of the season. However, there is a home and away team for the game, which is alternated between conferences every year. Being home or away only affects the color of the jerseys that can be worn.

There are also differences in how the game is broadcasted, stretching the game out to allow for a longer halftime show and commercial breaks, which we will discuss further below.

During the Super Bowl, commercials run longer than in the NFL regular season. That is to allow companies to pay large sums of money to have their advertisements run on the large stage that the Super Bowl provides. Super Bowl commercials have become almost as big a source of interest and entertainment to audiences as the game itself because companies who get such a coveted slot know that they must put their all into making a great commercial. As a result, most Super Bowl commercials are engaging experiences, often taking the form of comedic skits or dramatic stories that culminate in a humorous or poignant connection to the company or product being sold.

Many websites and social media platforms release rankings of the best Super Bowl commercials of that year a day or so after the game, so the drive to create a great commercial has almost become a competition of its own. Other common sights during Super Bowl ad breaks are movie trailers for the upcoming year, as studios know that the game’s early placement in the year, and its wide audience, will allow them to gather a lot of early buzz for their films if they release great trailers.

Just like the commercials, the Super Bowl halftime is longer than those in regular-season games. The standard 13-minute halftime is more than doubled to be 30 minutes long, which allows for a live performance by a music group. The Super Bowl Halftime Show is currently sponsored by Apple Music, and was previously sponsored by Pepsi for years. The halftime show typically features performances by the most popular artists of the day, complete with elaborate setpieces, lighting, and pyrotechnic displays.

Some of the most well-known Super Bowl Halftime Show performances have included:

When is the Super Bowl?

From 2004-2021, the Super Bowl took place on the first Sunday in February, exactly five months after the first game of the regular season. However, since the addition of an extra regular season game, the Super Bowl is now played on the second Sunday of February. The game is played at a neutral site that is chosen prior to the beginning of the season.

Who plays in the Super Bowl?

Can you tie in the Super Bowl?

How long is the Super Bowl?

Although a Super Bowl’s gameplay consists of four 15-minute quarters like any other football game, the television broadcast typically stretches for four hours. The broadcast of most football games lasts over three hours because of timeouts, stoppages, halftime, and commercial breaks. The Super Bowl features an extended 30-minute halftime show and longer commercial breaks, adding to the overall broadcast time.

Is there a Super Bowl every year?

There has been a Super Bowl every year since the first one in 1967. The Super Bowl is the annual championship game of the NFL postseason, so one is held every year to declare the season’s champion. Prior to 1966, the NFL season champion was decided first by season standings and then by the NFL Championship Game, which was held annually between 1933 and 1965.

Pages Related to What Is The Super Bowl?