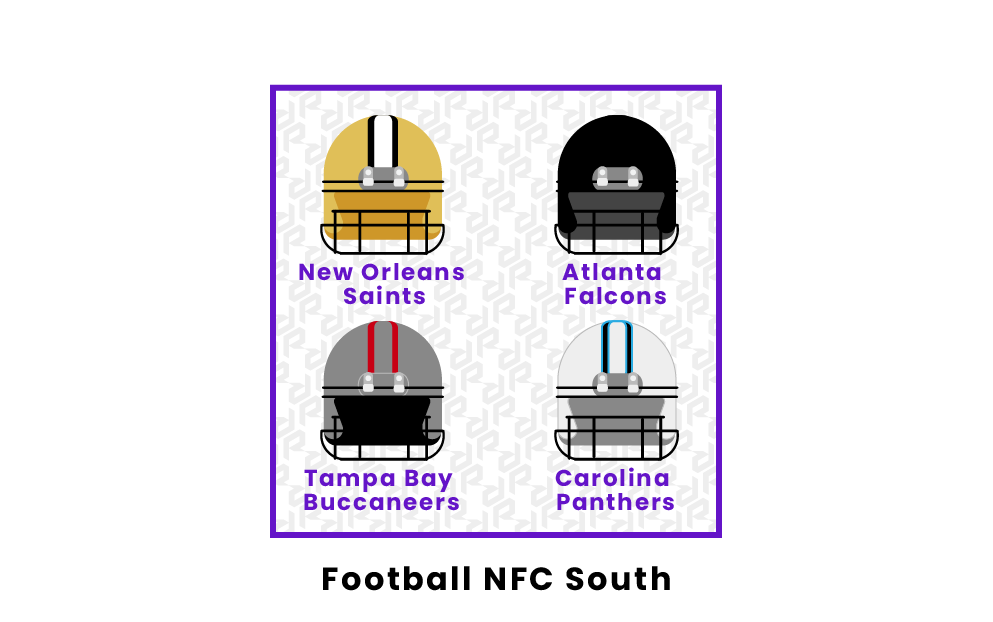 The NFC South is one of the four divisions of the National Football Conference of the NFL. The teams in the NFC South are Atlanta Falcons, Carolina Panthers, New Orleans Saints, and Tampa Bay Buccaneers.

The NFC South was created in 2002 when the NFL realigned the league’s divisions. It is the youngest division in the NFL, along with the AFC South. All four current teams were original members.

The NFC South is not known for its overwhelming success but rather for its consistency. However, some of their teams have begun to pick up steam in recent years. Teams within the division rarely outshine one another, as it is the only division since its establishment to never have a team win all of its divisional matchups. Below is each team’s performance since the NFC South Division was created in 2002.

The NFC South is one of five divisions that have had all of its members make an appearance in the Super Bowl. Tampa Bay and New Orleans have both capitalized on their Super Bowl appearances.

The Buccaneers won the Super Bowl in both the 2002-2003 season and the 2020-2021 season. In 2002, Tampa Bay defeated the San Francisco 49ers to win the Divisional Playoffs, after which they were victorious over the Philadelphia Eagles in the NFC Championship. In Super Bowl XXXVII, the Buccaneers faced the Oakland Raiders and successfully captured the Lombardi Trophy by a score of 48-21.

In 2020, the Buccaneers were invigorated by the arrival of all-time great quarterback Tom Brady after his departure from the New England Patriots, with whom he had won six Super Bowls in nine appearances. Though they did not secure that year’s Divisional Championship (which went to New Orleans), with Brady’s help, Tampa Bay defeated the Saints in the Divisional Round of the Playoffs, after which they overcame the Green Bay Packers in the NFC Championship. Brady and Tampa Bay went on to win Super Bowl LV, in which they played against Patrick Mahomes and the Kansas City Chiefs by a score of 31-9.

The New Orleans Saints scored their sole Super Bowl win in the 2009-2010 season, in what has been their only Super Bowl appearance thus far. The Saints began by winning the Divisional Round against the Arizona Cardinals and then proceeded to the NFC Championship, where they defeated the Minnesota Vikings by a score of 31-28 in overtime. New Orleans, led by quarterback Drew Brees, then went on to win Super Bowl XLIV against the Indianapolis Colts, with a final score of 31-17.

Meanwhile, considering the rest of the NFC South, the Carolina Panthers have appeared in the Super Bowl twice, though they lost both times, to the New England Patriots in 2003 and the Denver Broncos in 2015.

The Atlanta Falcons have never hoisted the Lombardi Trophy, but like the Panthers, they have also appeared in two Super Bowls, losing to the Denver Broncos in 1998 and the New England Patriots in 2017.

The Saints currently have the most Divisional Championships in the NFC South, with seven, and the Panthers follow close behind with five division crowns. The Falcons come in third place with four divisional titles, being tied with the Buccaneers, who also have four. Only twice, Carolina from 2013-2015 and New Orleans from 2017-2018, has a division winner won multiple years in a row, emphasizing how balanced the AFC South has been.

What teams are in the NFC South?

The teams in the NFC South are the Atlanta Falcons, Carolina Panthers, New Orleans Saints, and Tampa Bay Buccaneers. All four teams are based in the Southeast region of the US. The NFC South is one of the youngest divisions in the NFL as it was created in 2002, and its oldest member is the Falcons, which was created in 1966.

How long has the NFC South Division been in the NFL?

What team has won the NFC South Division the most?