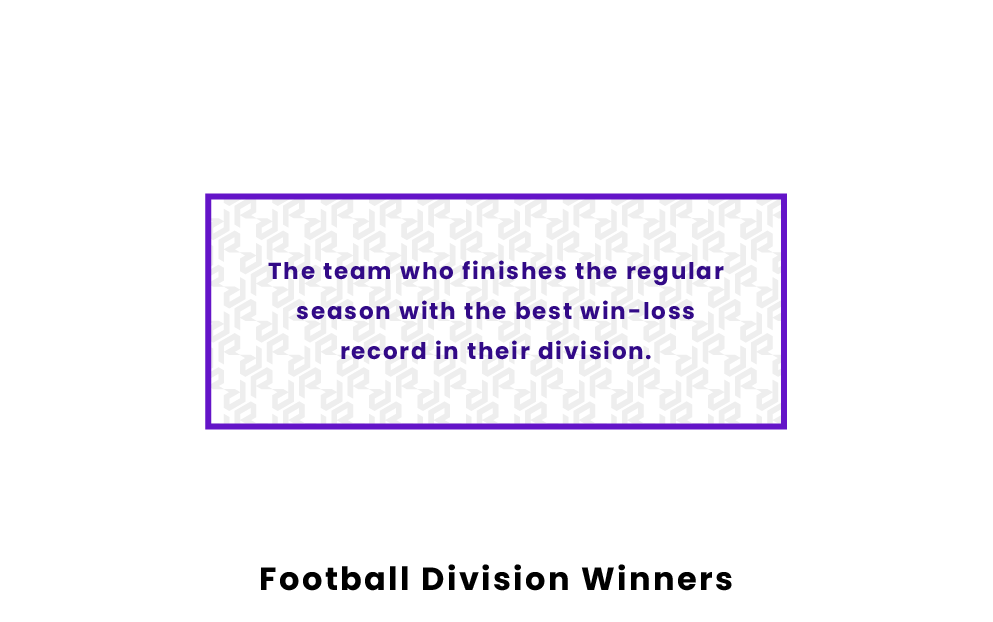 What Are Division Winners in Football?

The term division winner in football is used to describe teams that win their respective divisions by having a better regular season win-loss record than the other three teams in the division. Teams that win their division often have lots of talented players that help the team win consistently throughout the course of the regular season. Division winners generally win at least nine games, although there have been division champions with fewer wins in recent years.

Certain teams have risen to the top over the history of the NFL, dominating their division year after year. Below is a table featuring the team with the most division titles in each division.

How to Win the Division

In order to win a division in football, a team must have a better win-loss record than the three other teams in the division. If there is a tie between teams, then a series of tiebreakers are used.

With the title of division winner going to the team with the best record in each division, there is occasionally a need for a tiebreaker. A tiebreaker is required when two teams residing in the same division finish the regular season with the same record. The NFL first defers to each team’s regular-season head-to-head record. This means whichever team won the two regular-season games against the other will be declared the division winner.

If the teams have the same head-to-head record, their record against divisional opponents will be used to determine the tiebreaker. For example, if the Baltimore Ravens and Cincinnati Bengals both post 10 wins and seven losses during the regular season, and each won a single game against the other, their divisional records will break the tie. In this case, if the Ravens went 4-2 against other AFC North teams while the Bengals went 3-3, the Ravens would be declared AFC North Champions.

While there are more determinants to settle a tiebreaker, it is extremely rare for tie-breaking circumstances to progress past those listed here.

If more than two teams have matching records, the same tiebreakers are used until one of the teams is eliminated. Once that team is eliminated, the remaining teams go back to the beginning of the order of tiebreaks.

Impact on the Playoffs

Division winners enjoy a set of advantages once they make the playoffs. Among them are having home-field advantage and potentially a first round bye week. Division winners make up the majority of the NFL playoffs.

Not only does winning the division guarantee making the playoffs, but it also means that the team will play its first playoff game at its home stadium. The second, third, and fourth-ranked division winners in each conference play in the first round against wild card teams at their home stadium. The first-ranked division winners get a first-round bye, as well as the home field in all future rounds.

A total of seven teams make the playoffs in each conference, with the bracket set up to give one team in each conference the opportunity to not play in the first round. Those two spots are filled by the highest-ranked division winner in the AFC and NFC. They skip the wild card round and go straight to the divisional round, where they will have home field advantage.

What happens if division leaders tie in the NFL?

If two teams are tied for the best win-loss record in their division, a series of tiebreakers will be used to determine the division champion. First, the teams’ head-to-head records will decide who wins the division. If the teams split their two regular-season games, the next tiebreaker will be their overall divisional record. This means whichever team has won the most games against opponents within their division will win the division's title. If the teams are still tied, the next metrics used as a tiebreaker are, in order: their record against shared opponents, their conference win percentage, their strength of victory, and their strength of schedule.

How does a team clinch a division?

How many divisions are there in the NFL?