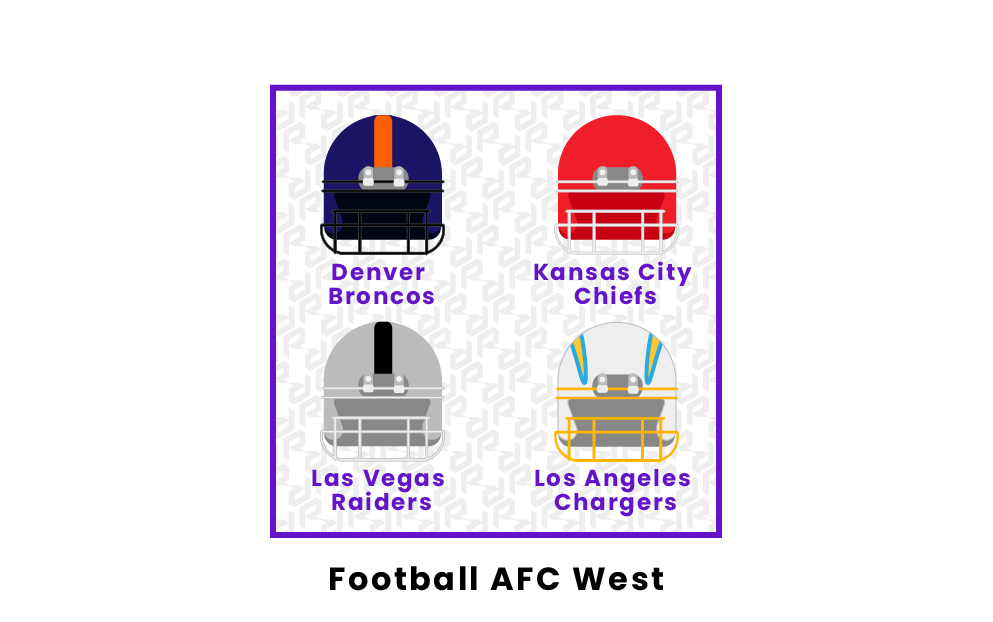 The AFC West is a division in the American Football Conference of the National Football League. The Denver Broncos, Kansas City Chiefs, Las Vegas Raiders, and Los Angeles Chargers make up the division.

The original division was created in 1960 and was part of the American Football League. The Dallas Texans were one of the original four teams along with the Broncos, Raiders, and Chargers.

Seven Super Bowl titles have been won by franchises in this division. The Broncos and Raiders have three while the Chiefs have one ring. The Chiefs, Chargers, and Raiders each won an AFL championship while in the AFC West, however the Chiefs were still the Dallas Texans and the Chargers were located in San Diego during their playoff runs. Below is a summary of the performance history of current AFC West teams since the division was created in 1960.

The Broncos’ second victory came the next year, in Super Bowl XXXIII. They won their division with a 14-2 season, defeated the New York Jets in the AFC Championship, and then advanced to the Super Bowl, where they overcame the Atlanta Falcons 34-19. Years later, in 2015, the Broncos won their third and most-recent Super Bowl with the help of legendary quarterback Peyton Manning. They topped the AFC West with a 12-4 season, defeated the New England Patriots in the AFC Championship, and went on to best the Carolina Panthers 24-10 in Super Bowl 50. Aside from their Super Bowl victories, the Broncos have had five losing Super Bowl appearances in 1977, 1986, 1987, 1989, and 2013.

The Kansas City Chiefs have the only other Super Bowl victory in the AFC West. This victory occurred in 2019. After a 12-4 season, the Chiefs clinched the Divisional Championship, blazing through the playoffs with huge victories against the Texans and Titans to meet the San Francisco 49ers in Super Bowl LIV, which they won 31-20 with the help of star quarterback Patrick Mahomes. The Chiefs returned to the Super Bowl the following year, winning the AFC West once again, beating the Buffalo Bills in the AFC Championship, and then facing Tom Brady and the Tampa Bay Buccaneers in Super Bowl LV, where they lost 9-31.

Though the Los Angeles Chargers have never won a Super Bowl, they have appeared in one as the San Diego Chargers, in 1994. After an 11-3 season, they clinched their division and defeated the Pittsburgh Steelers in the AFC Championship, advanced to Super Bowl XXIX, and faced the San Francisco 49ers, who defeated them 49-26.

The Denver Broncos, Las Vegas Raiders, and Los Angeles Chargers are tied for most division titles with 15 each. The Broncos have had the most postseason success out of the bunch, with eight AFC Conference Championships in comparison to five for the Raiders, four for the Chiefs, and one for the Chargers.

The Kansas City Chiefs have won the AFC West Division 14 times. However, it is safe to assume that they will catch up or surpass their divisional counterparts, as they have been the most dominant AFC West team in recent years.

The Cincinnati Bengals, Tampa Bay Buccaneers, and Seattle Seahawks franchises have all been a part of the AFC West/AFL Western. The Bengals played two seasons in the division while in the AFL. Tampa Bay participated for one lone season at the start of their franchise in 1976. Seattle spent 25 seasons with the group from 1977 to the NFL division realignment in 2002.

What teams are in the AFC West?

The teams in the AFC West are the Kansas City Chiefs, Los Angeles Chargers, Las Vegas Raiders, and the Denver Broncos. The Cincinnati Bengals, Tampa Bay Buccaneers, and Seattle Seahawks have all played in the AFC West in their history. However, the division has consisted of the same four franchises since the NFL division realignment in 2002.

What team has won the AFC West Division the most?

The Denver Broncos, Las Vegas Raiders, and Los Angeles Chargers are tied for the most AFC West Division titles with 15. However, the Kansas City Chiefs are right behind these three teams with 14 divisional titles. Considering how dominant the Chiefs have been in recent years, it is safe to assume that they will catch up or pass the rest of the pack in terms of divisional titles.

How long has the AFC West Division been in the NFL?

The AFC West Division has been in the NFL since the AFL-NFL merger in 1970. The AFC West was called the American Football League Western Division prior to the merger. The original AFC West consisted of four teams: the Kansas City Chiefs, Denver Broncos, San Diego Chargers (now Los Angeles Chargers), and Oakland Raiders (now Las Vegas Raiders).