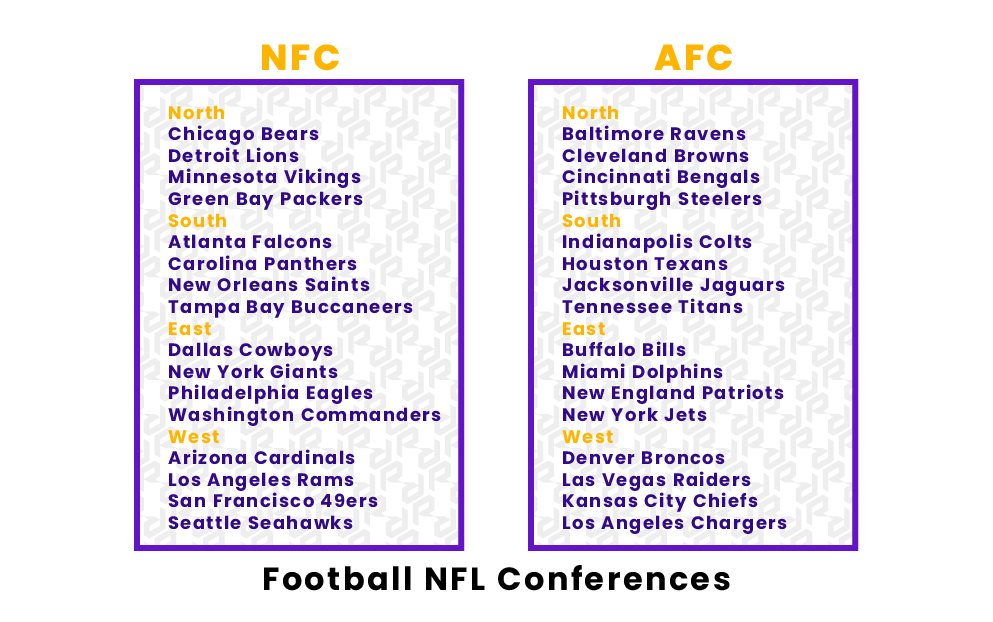 What are the AFC NFL teams?

The AFC NFL teams include the Buffalo Bills, Miami Dolphins, New England Patriots, and New York Jets in the East division, and the Baltimore Ravens, Cincinnati Bengals, Cleveland Browns, and Pittsburgh Steelers in the North. Rounding out the AFC are the Houston Texans, Indianapolis Colts, Jacksonville Jaguars, and Tennessee Titans in the South, and the Denver Broncos, Kansas City Chiefs, Las Vegas Raiders, and Los Angeles Chargers in the West.

What are the NFC NFL teams?

The NFC NFL teams are the Dallas Cowboys, New York Giants, Philadelphia Eagles, and Washington Commanders in the East division, and the Chicago Bears, Detroit Lions, Green Bay Packers, and Minnesota Vikings in the North. The Atlanta Falcons, Carolina Panthers, New Orleans Saints, and Tampa Bay Buccaneers are in the South division, and the Arizona Cardinals, Los Angeles Rams, San Francisco 49ers, and Seattle Seahawks compete in the NFC West.

How many teams were in the NFL when it first started?

When the NFL was first created in 1920 as the American Professional Football Association, there were a total of 14 teams in the league. These teams were all from the American Midwest, and they were: the Akron Pros, the Decatur Staleys, the Buffalo All-Americans, the Chicago Cardinals, the Rock Island Independents, the Dayton Triangles, the Rochester Jeffersons, the Canton Bulldogs, the Detroit Heralds, the Cleveland Tigers, the Chicago Tigers, the Hammond Pros, the Columbus Panhandles, and the Muncie Flyers. Only two of the original 14 teams have survived to this day: the Chicago Cardinals (later renamed the Arizona Cardinals) and the Decatur Staleys (currently the Chicago Bears).