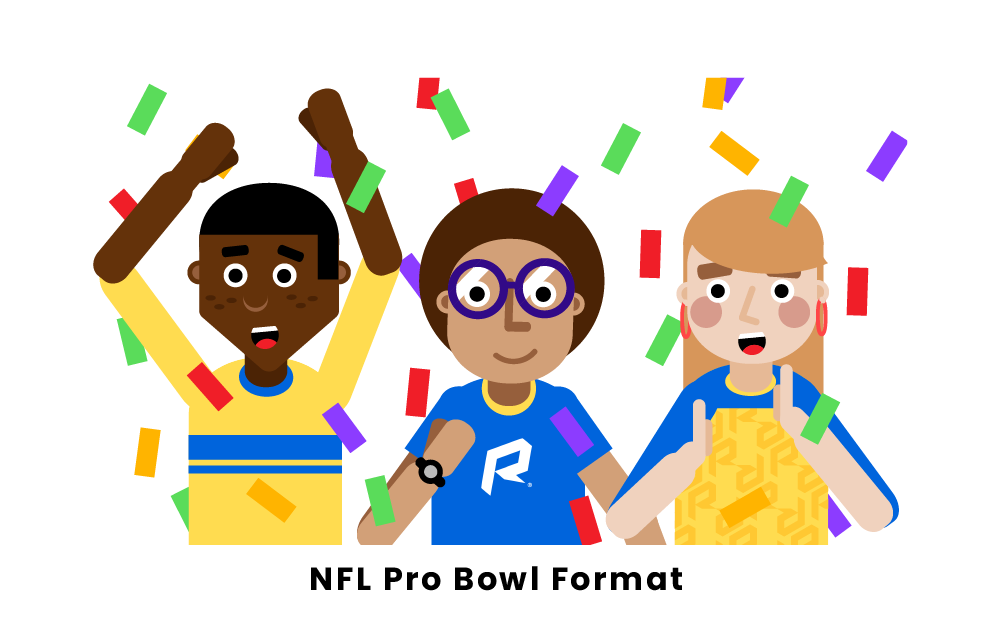 The NFL Pro Bowl is the league's all-star game that takes place the weekend before the Super Bowl each year. The game used to happen at Aloha Stadium in Honolulu, Hawaii before being relocated to Orlando, Florida in 2017.

On each team, a full roster is built including every position of a regular NFL game. For the offensive side, there are quarterbacks, running backs, a fullback, wide receivers, tight ends, tackles, guards, and centers. On the defensive side, there are defensive ends, interior linemen, outside linebackers, inside linebackers, cornerbacks, and safeties. For special teams, each team has a kicker, punter, returner, "special teamer," and a long snapper.

All NFL players are eligible to make one of the Pro Bowl teams. However, if players from either of the two Super Bowl teams are selected to the Pro Bowl, they are not allowed to participate and are replaced by runner up players.

In 2013, the NFL decided to try out a new format for the Pro Bowl. Instead of separating the two teams based on league conferences, predetermined team captains were allowed to draft players to their teams from the list of players selected to participate in the game. The team captains were notorious NFL alumni including Cris Carter, Deion Sanders, Jerry Rice, and Michael Irvin. When the Pro Bowl was moved to Orlando in 2017, the format switched back to the original AFC vs. NFC format.

Being selected to the NFL Pro Bowl is a big honor for players, as it proves that they are among the best football players in the game. By making it to the Pro Bowl, players build their reputation in the league which can lead to potential contract and endorsement opportunities. Another incentive to make the Pro Bowl is additional salary earnings for the players. While all players earn extra money, players on the winning team are awarded a more lucrative check than those on the losing team. For example, in the 2010 Pro Bowl, winning team players received a check worth $45,000 while losing team players only earned $22,000.

Throughout the season, players are evaluated based on their performance. Near the end of the season, voting takes place to determine what players make the Pro Bowl. In the second part of the NFL season, fans have the opportunity to vote for players that they believe deserve to make the game. Fan votes account for one third of the total vote decision and usually last until the last week of the regular season. The other two thirds of the voting are allocated to coaches and players. These votes are submitted after fan voting closes. In most years, the Pro Bowl rosters are finalized by the middle of December.

Since the game is played for fun at the end of the season, to protect players from injury the Pro Bowl has special rules that differ from a traditional NFL game. One of these rules is that kickoffs are not allowed during the game. This prevents players from running at full speed down the field towards one another.

Another rule is the elimination of intentional grounding for quarterbacks. This means that the quarterback can throw the ball away at any time, regardless if they are inside the pocket or if there is any receiver in the area of the pass. By removing this rule, quarterbacks can get rid of the ball and avoid being sacked during any point in the game.

Finally, only defensive linemen can rush the quarterback on passing plays. Therefore, the defense is not allowed to blitz. This prevents too many players from going after the quarterback at a time.

In addition to the rules to protect player safety, there are some additional rules that involve legal formations in the Pro Bowl. For the offensive team, they must line up in a standard formation and must remain in that formation without motion before the snap of the ball. In addition, a team can not utilize a formation where there are more than two wide receivers or three total eligible receivers to one side of the ball.

On the defensive side, the players must line up in a standard 4-3 formation (4 linemen and three linebackers). Additionally, the defensive team must have four total defensive backs on each play.

Why did the Pro Bowl move to Orlando, Florida?

In 1980, the Pro Bowl began being played in Honolulu, Hawaii at the end of each season. The game was played here until 2010 when the NFL decided to move the game to Miami, Florida for one year. After the game was moved back to Hawaii for a few years, it was transitioned to Orlando, Florida in 2017 when the NFL signed a three-year deal with Orlando for the game to be played at Camping World Stadium.

Where was the Pro Bowl played before Hawaii?

The first all star NFL game took place in 1939 between the New York Giants and Pro All-Star team at Wrigley Field in Los Angeles. After a few more Pro Bowls followed by several years without one, the game was reintroduced in 1951 and was played at Los Angeles Coliseum for the next 20 years. In 1972, the Pro Bowl began being played in various cities around the country before settling in Hawaii in 1980.

What was the onside kick alternative in the 2020 Pro Bowl?

Since there are no kickoffs in the Pro Bowl, if a team scores and wishes to attempt to immediately regain possession of the ball, they have another option instead of onside kicking the ball. The "kicking team" starts with the ball on their own 25 yard line and is given a 4th & 15 play. The team keeps the ball if they convert for a first down and loses the ball to the other team if not.

What is the Pro Bowl Skills Showdown?

The Pro Bowl Skills Showdown is a series of events that takes place during the week before the Pro Bowl game. Players from both conferences volunteer to compete and help their respective teams win. Each team is made up of 10 pro bowlers including two quarterbacks, one running back, two wide receivers/tight ends, three linemen/linebackers, and two defensive backs. In 2020, the competitions included precision passing, gridiron gauntlet, best hands, thread the needle, and epic pro bowl dodgeball.