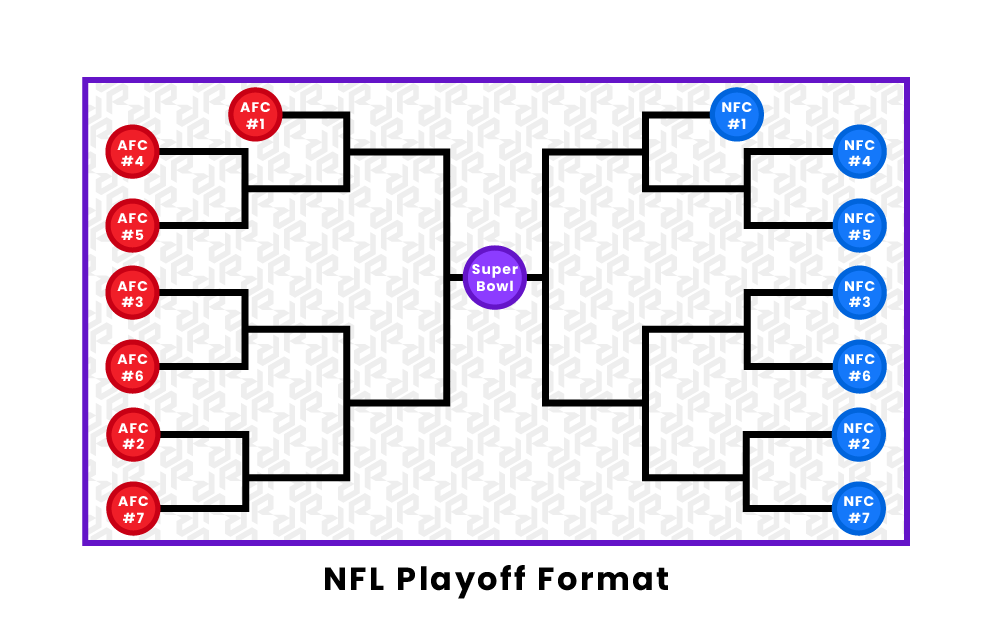 The NFL Playoffs are one of the most anticipated times of the year for many sports fans around the world. If they are lucky enough to see their favorite team reach the playoffs, their team will compete against some of the best teams in the league with the chance to reach the coveted Super Bowl.

The format of the NFL playoffs includes a single elimination bracket system similar to March Madness for NCAA basketball, but which has a few wrinkles that differentiate it. The NFL Playoffs system has changed a few times over the years, with the two most recent alterations occurring in 2002 and 2020.

Teams in the Playoffs

Differing from past years, a total of 14 NFL teams now make the playoffs, as of the most recent alteration to the playoffs in 2020. Seven of these teams are from the American Football Conference (AFC), and seven are from the National Football Conference (NFC). Within each conference, there are four different divisions. In the AFC, there is the AFC North, South, East, and West. Similarly, in the NFC, there is the NFC North, South, East, and West. The best team from each of the divisions makes the playoffs.

Based on their regular-season records, the four teams from each conference (AFC and NFC) are seeded from one to four. The two teams that earn the number-one seed from each conference earn a first-round bye, meaning they don’t have to play in the first round of the playoffs, along with home-field advantage for their second-round game. The second, third, and fourth seeds do have to play in the first round, and they play against the three “wild card” teams.

In addition to the four best teams from each conference, the next three best teams within the conference also earn a spot in the first round of the playoffs. These teams are known as wild card teams, and there are a total of six of them that qualify to play in the postseason. Wild card teams are decided by their overall win-loss record, with the top three teams from each conference that didn’t win their division being selected for the wild card spots.

The first round of the playoffs is known as the Wild Card Round. During this round, the twelve teams ranked two through seven face each other while the two number-one ranked teams get a bye week. Within each conference, the seventh seed faces the second seed, the sixth seed plays the third seed, and the fifth seed plays the fourth seed. These three games take place for both AFC and NFC conferences, for a total of six wild card games to begin the playoffs.

Following the Wild Card Round of the playoffs, the winners of each of the six games will move on to the Divisional Round of the playoffs. Unlike a traditional bracket, the NFL playoff bracket can be rearranged. The number-one-seeded team from each conference will always play the remaining team with the lowest seed. Therefore, if the seventh seed upsets the second seed in the Wild Card Round, the number-one seed will face the seventh seed in the divisional round. Furthermore, the winner of the fourth vs. fifth-seed game and the third vs. sixth-seed game would play one another.

Compared to the top two teams receiving first-round byes in past years, only the number-one seeded team from each conference does not have to play in the Wild Card Round of the playoffs. This gives them the advantage of having an additional week to rest and prepare for the Divisional Round game. There are a total of four Divisional Round playoff games, with two games in each conference.

The Super Bowl is one of the most famous games in professional sports and is the league championship for the NFL. The two teams that are victorious in the AFC and NFC Championship Games advance to face one another in the Super Bowl. At the end of the Super Bowl, the winning team is awarded the Vince Lombardi Trophy and is named the Super Bowl Champion.

After the 2019-2020 season, the NFL changed its playoff format for the first time in over 15 years. The new format expanded the playoffs, allowing 14 teams to compete in the postseason, instead of the previous 12, and adding two games to the postseason schedule. In addition, this adjustment modified each round of the playoffs, along with the seeding system.

An NFL Playoff bracket features four rounds, including the final (the Super Bowl). The first round, the Wild Card Round, features six games, in which the second through seventh seeds in each of the two conferences play each other. The field is rearranged for the second round, the Divisional Round, with the lowest surviving seed in each conference facing the number-one seed, which got a bye week during the Wild Card Round.

From the Divisional Round onwards, the playoffs follow a standard bracket format. The winners of the divisional games face each other in the Conference Championships, and the two conference champions face off in the Super Bowl.

How many teams make the playoffs in the new NFL playoff format?

Under the new NFL playoff format, first instituted in 2020, a total of 14 teams make the playoffs. This differs from the previous system, where only 12 teams made it to the postseason. Therefore, seven teams from each conference make the playoffs instead of six, providing one additional spot on each side of the bracket.

How many wild card games took place before the changed playoff format?

Why did the NFL change the playoff format?

One of the biggest reasons the NFL decided to change the playoff format was to increase their revenue. With two extra wild card games, the league hoped to increase its viewership and the amount of money it brought in from the playoffs. In addition to the NFL making more money, players can make more money from the new format as well. With two additional spots, players have a greater chance of making the playoffs and have the opportunity to earn more money through playoff bonuses.

How does overtime work in the NFL playoffs?

The overtime rules for the NFL playoffs differ compared to the regular season. During regular-season games, an overtime period lasts 10 minutes, whereas in the playoffs, it lasts for 15 minutes. In addition, a regular-season game can end in a tie if the score is even at the end of the overtime period. However, a playoff game cannot end in a tie, as one team must advance, and additional overtime periods may be needed to determine which team will advance to the next round. If the score is still tied after the fourth overtime, a fifth and final overtime period will begin and play will continue until one team scores. The scoring team will be declared the winner.