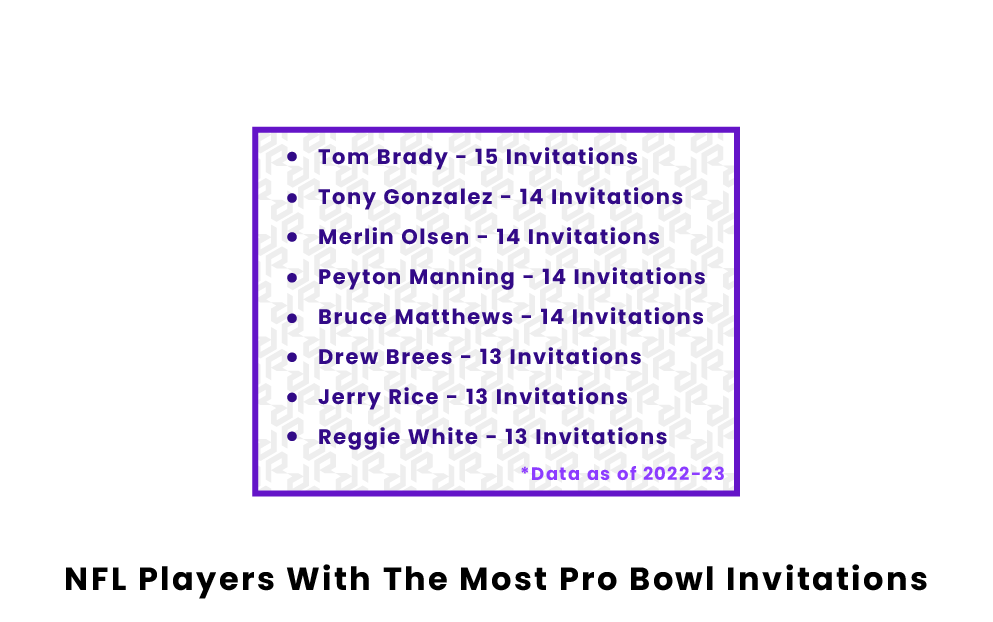 Every year, in the weeks leading up to the Super Bowl, the NFL holds many celebratory events to honor excellent players from the previous season, including the NFL Honors, the NFL Hall of Fame Induction Ceremony, and many more. One of the staple pre-Super Bowl events is the Pro Bowl, where players who are invited by the NFL due to their excellent performance in the previous season play a game that pits the two NFL conferences (AFC and NFC) against each other.

Getting invited to the Pro Bowl is a great honor for any NFL player, and is a statistic many fans and analysts use to judge a player’s Hall of Fame potential. So, which NFL players have received the most Pro Bowl invitations? Below, we will take a look at those who have been invited 13 or more times.

Which NFL Players Have the Most Invitations to the Pro Bowl?

It will likely come as no surprise that the player considered by many to be “the Greatest of All Time” is also the player with the most Pro Bowl selections. Over the course of his career, quarterback Tom Brady has set dozens of NFL records, including a record-setting 15 Pro Bowl invitations. Brady was named to the Pro Bowl roster in 2001, 2004, 2005, 2007, 2009 to 2018, and 2021. However, despite his many Pro Bowl selections, Brady has thus far only played in the game two times, in 2001 and 2004. For many of his Pro Bowl years, Brady had to opt out on account of his playing in the Super Bowl, but that hardly diminishes his achievement in being selected so often.

Playing in the NFL from 1997 to 2013, Tony Gonzalez is regarded as one of, if not the best, tight ends of all time, and this is reflected in his 14 Pro Bowl selections. Gonzalez was named to the Pro Bowl from 1999 to 2008 and from 2010 to 2013. His first run of selections all occurred during his lengthy tenure with the Kansas City Chiefs, while his second stretch came with the Atlanta Falcons. In addition to his Pro Bowl honors, Gonzalez was named All-Pro six times, was added to the Hall of Fame All-2000s team, and was inducted into the Pro Football Hall of Fame as a member of the Class of 2019.

Merlin Olsen’s legendary career with the Los Angeles Rams lasted from 1962 to 1976, and in that time, he earned 14 Pro Bowl selections, making him the earliest NFL player to reach that number, which remained unbroken until Tom Brady passed it in 2021. Olsen was named to the Pro Bowl every year from 1962 to 1975. Though he never won a Super Bowl (partly because the game did not exist for the first five years of his career), Olsen racked up five All-Pro selections, the 1974 Bert Bell Award, and placements on two Hall of Fame All-Decade teams (1960s and 1970s). Thus, it's no surprise that Olsen was inducted into the Hall of Fame in 1982.

Often spoken of in the same breath as Brady, Peyton Manning made his name as an all-time quarterback for the Indianapolis Colts and the Denver Broncos, with 14 Pro Bowl invitations to prove his excellence. Manning’s Pro Bowl accolades occurred in 1999, 2000, from 2002 to 2010, and from 2012 to 2014. They came along with two Super Bowl wins, a Super Bowl MVP Award, seven All-Pro selections, two Offensive Player of the Year Awards, and the 2005 Walter Payton Man of the Year Award. A true all-around football great, Manning’s legacy was capped off by his induction into the Pro Football Hall of Fame Class of 2021.

The second player to reach 14 Pro Bowl selections in league history, Bruce Matthews spent his entire career with the Titans, joining them as they moved from Houston to Nashville and changed their name from the Oilers to the Titans. Matthews was named to the Pro Bowl from 1988 to 2001. Playing as a guard, center, and tackle, Matthews earned seven All-Pro selections in addition to his Pro Bowl invitations, and was also named to the Hall of Fame All-1990s Team. Though he also never won a Super Bowl, Matthews’ career was more than enough to earn him a spot in the Pro Football Hall of Fame Class of 2007.

A star quarterback in the vein of Brady and Manning, Drew Brees played for the New Orleans Saints from 2001 to 2020, and racked up 13 Pro Bowl invitations during that time. Brees was named to the Pro Bowl in 2004 and 2006, from 2008 to 2014, and from 2016 to 2019. Brees’ accolades also include a Super Bowl victory in the 2009-2010 season, a Super Bowl MVP Award, an All-Pro selection, two Offensive Player of the Year Awards, and the 2006 Walter Payton Man of the Year Award, among others. While Brees has not yet been named to the Pro Football Hall of Fame, it is not much of a stretch to think that he will be when he becomes eligible, and his 13 Pro Bowls are just one reason for that.

The only wide receiver with 13 Pro Bowl invitations thus far, Jerry Rice spent most of his career with the San Francisco 49ers. Rice, who started his career in 1985, also played for the Oakland Raiders and the Seattle Seahawks before retiring in 2004. This gave him plenty of time to amass his 13 Pro Bowl invitations, which came from 1986 to 1996, in 1998, and in 2002. Along with these, Rice won three Super Bowl rings, a Super Bowl MVP Award, two Hall of Fame All-Decade Team placements (1980s and 1990s), and two Offensive Player of the Year Awards. As would be expected from stats like those, Rice was inducted into the Pro Football Hall of Fame Class of 2010.

Between 1985 and 2000, Reggie White made a name for himself as one of the best defensive ends in the NFL, playing for the Philadelphia Eagles, Green Bay Packers, and briefly for the Carolina Panthers. He earned 13 Pro Bowl invitations, from 1986 to 1998. In addition to these, he was a Super Bowl Champion in the 1996-1997 season, was named to two Hall of Fame All-Decade Teams (1980s and 1990s), earned two Defensive Player of the Year Awards, and was inducted into the Pro Football Hall of Fame in 2006.

Which NFL player has earned the most Pro Bowl invitations?

The NFL player with the most Pro Bowl invitations is Tom Brady. Over the course of his 22-year career, Brady has been named to 15 Pro Bowls, with his most recent coming in 2021. These invitations are just a few of Brady’s legendary achievements, which also include seven Super Bowl wins, five Super Bowl MVP Awards, and two Offensive Player of the Year Awards, among dozens more.

Do you have to play in the Pro Bowl if you are invited?

While it is a great honor to be invited to the Pro Bowl, many fans of the NFL know that the biggest names who are invited every year often don’t actually play in the game. Though the Pro Bowl honors the NFL’s best, it has not been required for players to actually participate in the game if selected. Oftentimes, players opt out if they are going to play in the Super Bowl, in order to avoid injury. However, according to new league rules for the 2022 “Pro Bowl Games,” which has downgraded the game to a flag football competition, players who are invited will be required to attend, barring a legitimate medical issue.

Pages Related to NFL Players With Most Pro Bowl Invitations