NFL Football Teams with the Most Super Bowl Wins 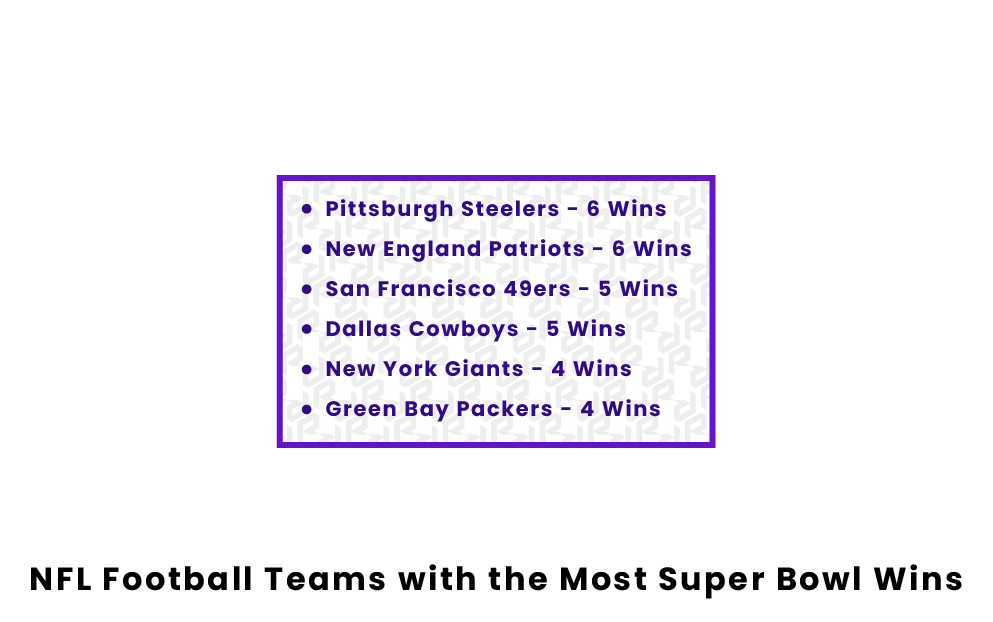 The NFL schedule is one of the most grueling in sports, as players must put their bodies on the line for 17 games to get a shot at the postseason. Once there, it’s a battle to the Super Bowl, a winner-takes-all game that is one of the biggest spectacles in sports. Many teams have won rings over the years, but only a few can call themselves dynasties. To learn more about which teams have the most Super Bowl wins, keep reading below.

List of NFL Teams with the Most Super Bowl Wins

Tied for the most rings in league history with six, the Pittsburgh Steelers are one of the more storied franchises in the sport. They were a dominant force in the 1970s, winning the Super Bowl four times between 1975-1980. It took over a quarter of a century, but they came back in 2006 to defeat the Seattle Seahawks for their fifth ring. Finally, in 2009 they took down the Arizona Cardinals for what was, at the time, a record six rings.

The only other team to hoist the Lombardi Trophy six times, the New England Patriots are perhaps the best embodiment of the word “dynasty” the NFL has ever seen. From 2002-2019, they made it to the Super Bowl nine times, by far the most of any team in the NFL during that span. In those nine appearances, they won six times, becoming the most successful and feared team of the 21st Century. Led by quarterback Tom Brady and head coach Bill Bellicheck, the Patriots will always be remembered as a football powerhouse for their nearly two decades of dominance.

The San Francisco 49ers have five Super Bowl wins in their franchise history. If the Steelers were the team to beat in the seventies, then the San Francisco 49ers were the league’s top dog in the 1980s. They made four Super Bowl appearances between 1982-1990, winning all four of them. In 1995, they returned for their fifth appearance and maintained their perfect record with a 49-26 blowout win over the San Diego Chargers. Since then, the Niners have made it back to the Super Bowl twice but lost both times.

Nicknamed “America’s Team,” the Dallas Cowboys have five Super Bowl wins, making them one of the most successful teams in NFL history. They made five Super Bowl appearances in the 1970s but won only two rings, thanks in large part to the Pittsburgh Steelers. In the 1990s, they won three rings sandwiched around the 49ers’ victory, winning the title in 1993, 1994, and 1996. Since then, they have yet to make it back to the Super Bowl, but they remain tied for the second-most rings ever.

The Giants have won four Super Bowls in franchise history. In 1987, they won their first-ever Super Bowl, only to miss the postseason the next two years. After losing in the first round in 1990, they went all the way again in 1990 and won the franchise’s second ring. Then in 2008, they went up against the New England Patriots, who at that point had a perfect record for the season. In one of the biggest upsets in Super Bowl history, the Giants took down New England thanks to an all-time moment between quarterback Eli Manning and receiver David Tyree when Tyree caught a crucial throw in the fourth quarter pinned against his helmet. In 2012, New York won their fourth ring, once again over the Patriots, but that would be their only playoff appearance of the decade until 2016.

The only other team to win exactly four rings in NFL history, the Green Bay Packers are one of the most well-known franchises in the league. They won the first-ever Super Bowl in 1967 over the Kansas City Chiefs, and they came back the next year and successfully defended their title. After that, they wouldn’t make a Super Bowl appearance for nearly three decades, but they finally broke through in 1997 to win their third ring. They weren’t able to repeat after making it back the following year, but in 2011 they took down the Pittsburgh Steelers to capture their fourth Super Bowl title.

Which player in the NFL has the most rings?

The player in the NFL with the most Super Bowl rings is Tom Brady. Brady quarterbacked the New England Patriots to nine Super Bowl appearances over an 18-year span, winning six of them. In 2021, he led the Tampa Bay Buccaneers to a Super Bowl victory, securing his seventh ring. He is regarded by many as the greatest football player of all time and will no doubt be a Hall of Famer when he retires for good.

Which NFL team has the most rings?

Two NFL teams are tied for the most championship rings, with six each: the New England Patriots and the Pittsburgh Steelers. While the Patriots won all six of their titles in the 21st century, the Steelers took a more methodical approach to their dominance. They won four rings from 1975-1980 and after a long hiatus, came back in 2006 to defeat the Arizona Cardinals for their fifth ring. When they won ring number six in 2009, it was an NFL record.