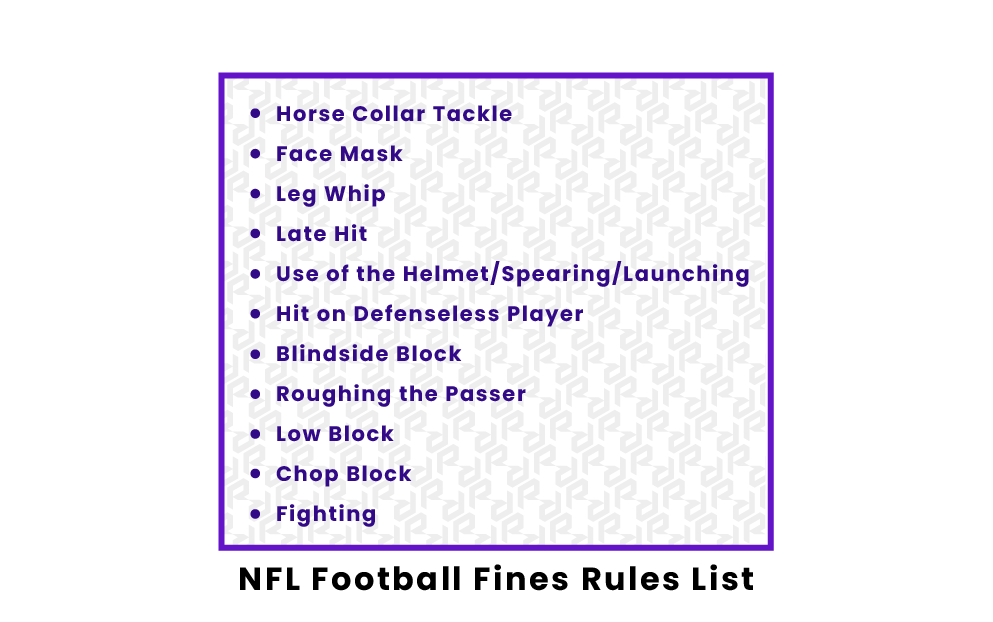 As with most major sporting organizations, the National Football League has rules in place to punish coaches and players for poor or detrimental behavior. These punishments generally come in the form of monetary fines, which are meant to dissuade players and coaches alike from behaving poorly in the game of football. What are the fines that the NFL deals out? Keep reading to find out!

What Fines Can Players Receive in the NFL?

There are a wide variety of fines that players can receive in the NFL. These fines are broken up into the categories of: Offense against Game Officials, Player Safety Violations, Fighting, Sportsmanship Infractions, and Uniform Violations. The structure of fines in the NFL is set up so the second offense a player commits involving one of these infractions has a heavier fine associated with the act than the first time a player commits it. The idea behind the fine system is that if a player's source of income is directly affected by their actions on the field, they will be more cautious to infringe or break the rules that the NFL has in place.

One of the most common penalties in football, unsportsmanlike conduct, has a $13,261 fine associated with its first offense. The average price of a fine for the first offense of a fine is $7,073, while the average cost associated with a second offense is $14,146. The least expensive fine is a first-offense uniform violation, which carries a penalty of $5,305.1 The most expensive fine in the NFL rulebook is gang signing, which has no monetary value associated with it, but can result in a player being suspended or ejected from the NFL.

Most fines in the NFL only have a minimum value, and there is no maximum amount that a player can be fined if it is determined by the league that more punishment is in order for a specific action. Additionally, most fines for players in the National Football League are associated with onfield actions and penalties that occur during active play. The basic premise of the fine rules is that if a player commits a flagrant act, intentionally harms another player, or damages the reputation of the sport, a fine will be issued.

What Happens With the Money Collected From Fines?

The money collected by the NFL through fines for players and coaches goes to charity projects. The NFL does not directly profit from fines imposed on league members in any capacity, and instead use the money to support former players or charitable organizations.

What Are the Fines For Coaches in the NFL?

While coaches can be fined for the same offenses as players, they can be fined for anything deemed detrimental to the game of football. There are examples of coaches being fined for “conduct unbecoming,” such as when the Denver Broncos head coach Josh McDaniels was fined for filming a San Francisco 49ers practice. Another example of fines for coaches is when, in 2020, several head coaches were fined six figures for not wearing masks during the COVID-19 pandemic.

The fine limitations for coaches is different than for NFL players, as the fines are normally higher in price, and are used to make an example of a coach who did not act in accordance with their position. Overall, however, coaches are flagged and fined much less frequently than players.  This is normally due to a lower rate of enforcement from officials to coaches, and because the off field behavior of coaches is more reflective of the character of a team in the eyes of the NFL. Some fines that coaches can receive do include unsportsmanlike behavior, obscenity, fighting, and direct offenses against an official.

Can NFL Teams Be Fined?

Entire franchises can, in fact, be heavily fined if it is deemed necessary by the NFL. Team fines are handed out for offenses related to the competitive nature of the game of football. The fines dealt out can be as high as $500,000. The actions that would motivate this sort of team fine include being late for a kickoff or an overall failure to comply with uniform regulations. These fines are rare, as the situations that necessitate them rarely occur.