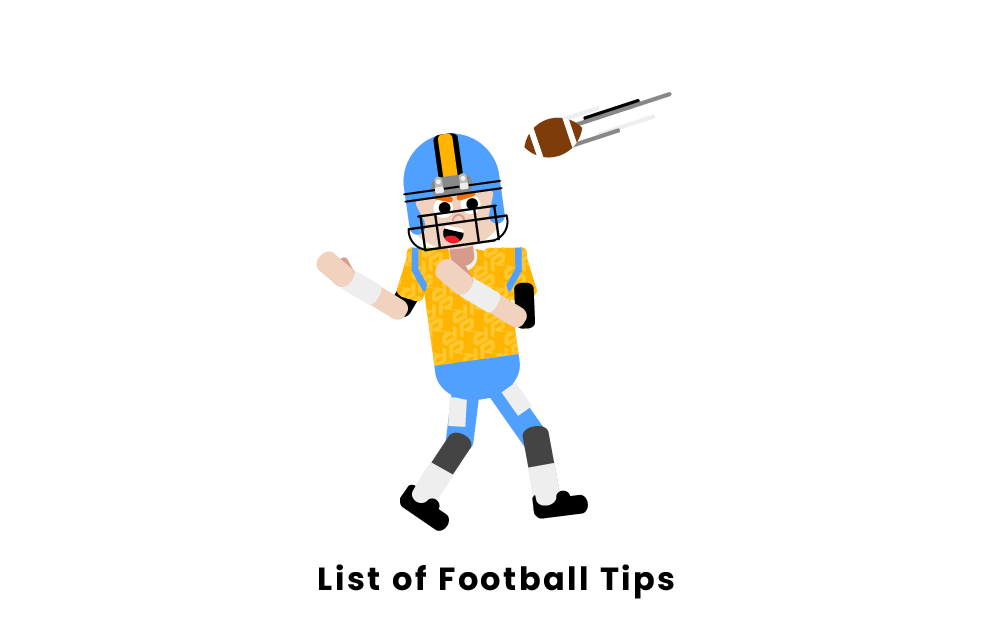 Football is an evolving sport. The way the sport is played now looks different from the way it did even five years ago. However, as the game has changed, the basics remain the same. Learn about a few football tips here!

The number one tip while playing is to secure the football. A coach’s favorite saying is ball security is job security. It is important for skill position players to hold onto the ball tightly. They can do so by applying the five points of pressure on the football. The five points of pressure are the fingertips, the forearms, elbows, biceps, and chest.

The fingertips of the ball carrier should cover the nose of the football.

The forearms should also be applying pressure to the ball to keep it tight against the forearm of the ball carrier.

The biceps can also be an essential point of pressure for ball security. Similar to the forearms, the biceps can be used to hold the ball tight against the body.

The arm that is holding the ball should be tight against the side of the body so that the defense can not come from behind and knock the ball free.

The ball should be pressed firmly against the chest of the ball carrier. Do not let the ball swing when running.

Do not fumble. Keep the ball high and tight between the chest and the chin.

There is a certain art to throwing a football and getting that beautiful spiral. Here are a few tips for spinning a spiral.

It is important to not grip the ball too tightly. The fingertips should be applying pressure to the ball. Arch the fingers and knuckles so they raise off the ball.

Similar to throwing a baseball, throwing a football starts from the ground up. Positioning the lower body correctly will allow for the upper body to perform properly. Feet should be shoulder width apart and the front foot should lead in the direction of where the throw is going.

The final part of the throwing process is to finish. Always finish with the throwing hand in the opposite hip. This helps generate velocity as well as help spiral the football. The back leg should be used to push off the ground to generate force as well.

A common tendency when catching the football is to trap it against the chest or to let the ball get to the body first. Anyone trying to catch the ball should catch it out in front of their body with their hands. The hands should make a diamond shape, with the two index fingers at the top close together and the thumbs at the bottom close together.

The nose of the football should be caught in the diamond that the hands are making. Secure the ball in between where the index fingers and thumbs are touching.

Let the ball come in contact with the hands. Secure the ball with the tips of the fingers and make sure not to grip the ball too tightly. Soft hands is a common football expression relating to someone who makes catching look effortless.

After catching the ball and looking it in, the receiver is now the ball carrier! Tuck that ball high and tight using the five points of pressure and score a touchdown!

The best football players, coaches and teams are always the most prepared. Success does not only happen on the field; it begins in the preparation for the game.

Before playing, players should always make sure they have warmed up and stretched. Stretching is a great way to improve range of motion, athletic ability and decrease the risk of injury.

Maining a certain level of physical fitness is important in football. Football is a physical sport that requires a lot of running and contact. Therefore, it is important to be strong and in good shape.

Watching film on your opponent is a great way to gain an advantage over them. Watching film can allow teams and players to pick up on their opponents’ tendencies, strengths and weaknesses. Players can also watch film of themselves to learn how they can improve their own game.

Football is a physical game. That doesn't necessarily mean that it has to be a dangerous game.

The helmet is the greatest safety asset to a football player. Make sure your helmet is securely fastened on your head by having the proper amount of air put in and making sure the chinstrap on the helmet is buckled tightly.

While the helmet is designed to protect the player, that is its only use. Do not use the helmet to initiate contact with another player. Not only is it a penalty, it also can cause serious injury. When tackling, a player should aim for the ball carrier’s legs and keep their head on the ball side of the player. Additionally, ball carriers should not lower their head to initiate contact either. Football is safest when keeping the head out of contact.

American football should only be played with pads on. Do not play tackle football without pads. Stick to the two-hand-touch alternative if playing with a group of friends to avoid injury. Playing without pads can create bad fundamentals that will hurt performance.