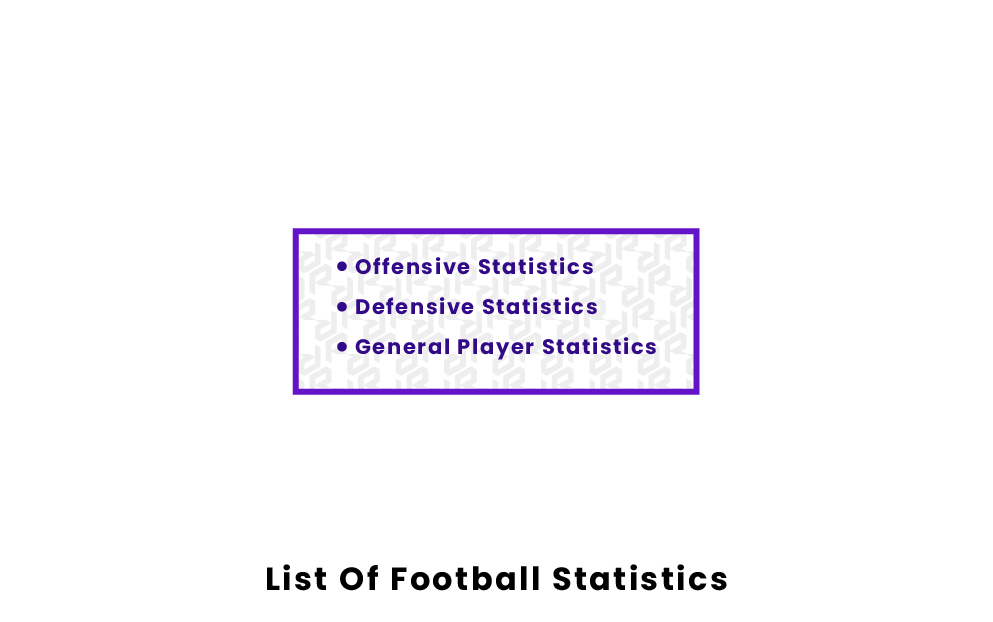 There are many aspects to a game of American football. This means that there are tons of ways to track what the players do and compare it to years past. The list below will explain what the most common statistics are when talking about football. Statistics like these are often used to determine the best players at the end of each year (MVP, Pro Bowl).

Attempts per game are recorded mainly for quarterbacks or running backs. This stat covers both rushing and passing attempts. This contributes to a player’s efficiency depending on how much yardage they gain per attempt.

This stat records the average number of yards that were gained. This can be either for a pass, run, or reception. AVG gives an idea of how efficient a player is or how effective they are when they have the ball.

Completion percentage signifies how many passes were completed based on the number of attempts. This stat is usually recorded every game as well as shown as a season-long statistic.

This stat records the number of field goals attempted. Usually, this statistic is limited to per game and per season.

Field goals made refers to the number of field goals that were successful and scored the team three points. Similarly to FGA, this stat is most commonly recorded per game and per season.

The fumble statistic records all types of fumbles. It does not matter if the fumble was recovered by the defense or offense; they all count towards the same category.

This stat signifies a long gain. It can be split into many categories, such as per game and per season. This is normally associated with the whole team, so the longest play from the team as a whole will be recorded.

This stat records the number of punts that occur throughout either a game or a season. The more punts that a team records often means that they are not very productive offensively. In rare cases, there can be a lot of punts by both sides during a game if both defenses are playing very well.

Receptions per game shows how many times a receiver caught the ball during one game. Those who have over 10 receptions per game are known to be very productive, while those under five did not have a very strong showing.

Sack percentage is an offensive statistic that is the percentage of attempts that end in a sack. It is calculated by taking the number of sacks and dividing it by the sum of all passing attempts and all times sacked.

One of the most common statistics, touchdowns, records the number of touchdowns that a player, team, offense, or defense has during a game or season. This is a very useful and important stat in fantasy football as it rewards users with the most points.

Short for targets, TGTS is a receiving stat that tallies how many times a player has been thrown to. This is typically a stat only for wide receivers, but it can be kept for other players as well. Targets include passes that are batted away by a defender or dropped by the receiver, as well as completed receptions.

This stat shows how many extra points were attempted by a team in a game. This can also be recorded over an entire season.

Extra points made is a statistic similar to XPA, but which records how many of the attempts were successful and is shown as a fraction with the number of attempts. The rate of extra points made has gone down significantly after the NFL increased the distance to 33 yards over the last couple of years.

Yards after catch is a stat that shows how many yards a running back or receiver picked up after completing a catch from the quarterback. This is an important stat from an efficiency standpoint, letting teams know whether or not they want to keep giving the ball to a specific player.

Assists on tackles are when a player is in the play but does not get full credit for bringing the ball carrier down. They became an official statistic in 2001 but were recorded consistently beforehand.

This is the stat for the number of punts that have gotten blocked during a game or season, depending on the range of the table. Blocked punts are not frequent in football, especially because of the dangers of roughing the kicker.

Forced Fumbles are recorded on a game basis as well as in a season-long category. These fumbles can be caused in almost any scenario, such as a strip sack on a QB, or a normal strip on a running back or wide receiver.

Fumble recoveries account for the number of times that the defense both caused and landed on the football, giving the possession to their team. This stat does not count for fumbles that were recovered by the offense; it is solely a defensive stat.

Passes defended is a fairly new stat for defensive backs. This stat is recorded when a defender forces an incompletion either by knocking the ball away or simply not allowing the receiver to catch the ball.

Shows the number of rushing attempts against a defense, which can reflect a tough defense or an offense that prefers to pass the ball.

Tackles are recorded with this stat and are often recorded per game and per season. Rankings are divided between teams and the league, which shows what defender has the most tackles overall.

Turnovers show the number of times a defense has achieved a change of possession as a result of strips and forced fumbles. A high TO reflects an effective and opportunistic defense.

Yards per rush shows the average number of yards allowed by a defense on rushing plays. A superior defense will have a lower YR.

This signifies how many times that one player was selected to First Team All-Pro. This is a group of players picked at the end of the year in order to create an imaginary team of the best players in the league.

Short for first downs, FD can be an individual or team stat that is applied to offense and defense. FD can mean receiving or passing first downs, or they can represent the number of first downs allowed by a defense.

This statistic is used on all players and signifies the number of games they have played. It is usually recorded on a weekly basis and later grouped into seasons and career-wise categories.

Games started is a stat that is similar to the games statistic but relies on the fact that the player was included in the starting lineup. Being one of the 11 players on the field on the first possession of the game will earn you a GS.

The total number of penalties incurred by a team. This stat shows the overall discipline of a team and is not divided between offense and defense.