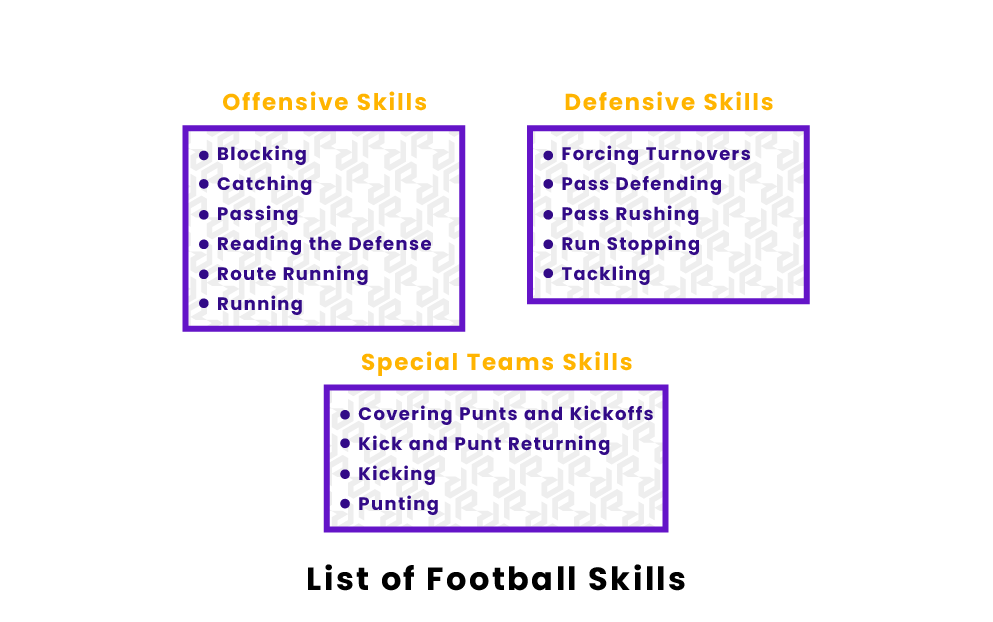 Football is a multifaceted sport that requires its players to have a variety of skills. Each player has specific skills relevant to their position on the field. For example, one player’s job may be to catch passes, while another player’s job may be to kick the football. It is highly improbable for an athlete to possess all the skills necessary to play every position at a high level. This is why each team has 11 players on the field, all performing a specific task.

In football, there are three general types of skills, each of which relate to the three main aspects of playing the game. These three skill sets are:

Depending on which position you play in football, there are a variety of different skills that you will need to learn. While certain positions emphasize certain skills over others, some positions will be required to possess multiple abilities. The types of offensive skills include:

Often the most overlooked aspect of football, blocking is crucial to the success of the offense. In order to perform a block, an offensive player must place themselves in front of a defender and block them from rushing the quarterback or tackling a player with the ball.

When run blocking, the blockers are in charge of creating holes in the defense for the offensive player to run through. In pass blocking, offensive linemen, and sometimes running backs, will drop back and prevent the defense from hitting the quarterback.

Offensive linemen perform the majority of blocking, but tight ends, running backs, and receivers may also be involved. Without quality blocking, it is difficult for an offense to have success moving the ball down the field.

Somebody has to catch those passes thrown by the quarterback, right? This task falls on wide receivers, tight ends, and occasionally running backs. Having quality pass-catchers is nearly as important as having a good quarterback. The bulk of pass-catching is done by wide receivers, who specialize in securing the football when it is in the air. Receivers must possess outstanding hand-eye coordination to be able to catch the football in a variety of different ways. When tight ends and running backs are not blocking during pass plays, they are often used to catch dump-offs and shorter routes to gain easy yards.

Being able to pass a football effectively is crucial to the success of every team. Passing the football is the job of the quarterback, who must possess skills such as power and accuracy when throwing the ball. Because the passing game is key to having an effective offense, the quarterback position is the most important role in all of football. The quarterback must not only have the physical ability to pass the ball efficiently, but also the mental capacity to determine where and when the ball should be thrown based on how the defense is set up.

While the quarterback is responsible for reading the entire defense, each offensive position should be able to anticipate what their assignments will do. This is crucial to ensuring that every assignment is performed correctly and that no defender can break down the play.

Route running is a skill that is essential for wide receivers, tight ends, and running backs. On passing plays, these positions will be responsible for running a set route. Proper route running allows the quarterback to anticipate where to throw the ball, and allows the runner to create separation from the defense. Wide receivers will usually run all types of routes and should combine size, quickness, and strength. Tight ends more commonly run shallow routes, but they should have physical presence and awareness to find holes in the defense. Most running back routes begin from the backfield, and the best running backs possess the ability to be reliable receivers.

In addition to offensive skills, football requires its players and teams to master certain defensive skills. These skills are related to the defense and its primary objective of stopping the offensive line from making plays, advancing down the field, and scoring points. Many defensive skills focus on things like blocking, rushing, and tackling. Defensive skills in football include:

Since passing the ball is the most important skill to possess on the offensive side of the ball, being able to rush the passer is the most important skill on the defensive side of the ball. Pass rushers must have the strength and quickness to evade or overpower offensive linemen and apply pressure to the quarterback. Being able to disrupt the passing game of an offense by pressuring the quarterback is essential to the success of the defense. Pass rushing is primarily performed by defensive linemen and linebackers, but cornerbacks and safeties may also be involved in putting pressure on the quarterback.

If the defense cannot sack the quarterback and prevent the ball from being thrown, the next best thing is to be able to prevent the ball from being caught by the receiver. Cornerbacks and safeties are largely responsible for defending passes thrown by the quarterback. It is essential for these defensive players to have the speed to shadow receivers and the hand-eye coordination to locate the thrown football and prevent it from being caught. Linebackers that are not rushing the quarterback will often drop back and cover tight ends or running backs. Oftentimes, they play zone defense in the middle of the field to prevent any shallow routes over the middle.

Defensive players are not only required to defend the pass but stop the run as well. Defensive linemen and linebackers must have the strength, size, and speed to crowd the line of scrimmage and eliminate space for running backs to utilize. If the defense has the ability to neutralize the running game, they force the offense to become one-dimensional by relying heavily on the passing game. In turn, the defense has a greater chance of success because they only have to focus on defending the pass at this point.

Although different defensive positions require different skills, every player on the defensive side of the ball must be able to tackle. Tackling is a basic element of football and is required to prevent offensive players from advancing the ball down the field. It is important for defensive players to know how to tackle correctly without being penalized. Tackles that involve helmet-to-helmet contact or hands to the facemask of the offensive player are considered illegal.

A final important skill set defensive players must have is the ability to cause turnovers, such as fumbles, interceptions, and turnovers on downs, among others. Defenders can cause fumbles by stripping the ball from an offensive player’s hands or by tackling him in such a way that he drops the ball before his knees are down. In order to cause interceptions, defenders should have an awareness of the quarterback and try to predict where he will pass the ball so that they can position themselves in order to catch the ball before the offensive receiver. Finally, general turnovers on downs require all of the skills above, as well as a mastery of tackling, blocking, and rushing.

The third set of skills that are vital for a football team to succeed on the field are Special Teams skills. These special teams skills are important during punting plays, field goals, extra points, and kickoffs, among others, and they include:

Kicking is a specialized skill usually possessed by a single member of the team. The kicker’s job is to kick the football through the field goal uprights and score points for their team. In order to do so, kickers must have leg power and accuracy. Along with being able to kick field goals and extra points, kickers must also be able to send the ball downfield to the opposing team on kickoffs. This requires a tremendous amount of leg strength.

Similar to kickers, punters rely on leg power and accuracy to perform their job effectively. It is the punter’s responsibility to punt the ball to the opposing team when possession of the ball is changing teams. The punter’s objective is to kick the ball as far downfield as they can without putting the ball in the endzone. A good punter creates favorable field position for his team’s defense.

Returners have the opportunity to gain yardage for their offense when fielding kicks and punts from the opposing team. Like running backs and receivers, kick returners must possess speed and elusiveness to avoid being tackled. Special teams are often an overlooked facet of the game, but having a quality kick returner can be a big advantage for teams.

Players on the kicking team must sprint down the field and attempt to tackle the kick returner to prevent him from scoring a touchdown or getting a long return. This job requires speed to close in on the returner and strength to outmuscle blockers on the returning team. Players must also have the discipline to stay in their lane and cover their designated portion of the field. If players stray outside of their lane, kick returners can take advantage of this and find holes to gain additional yardage.

What are the most important basic skills in football?

The most important skills for a player to learn depend on the position they play, but speed, strength, agility, and football IQ are some of the most important to every position. Remaining athletic and being able to analyze your opponent will give you an advantage at every position. Offensive players must be good at handling the ball and facilitating the offense, while defensive players must be excellent tacklers and disruptors.

What is the most skilled position in football?

The most skilled positions in football are the cornerback and quarterback. The cornerback is far and away the most skilled defensive position in football, with the best players at this position featuring speed, razor-sharp instincts, spectacular tackling ability, and a keen eye for reading passes and intercepting the ball. Meanwhile, quarterbacks must have strong throwing arms, typically have the highest game IQ on their team, and oftentimes feature great speed, which allows them to roll out of the pocket to avoid sacks or scramble for the end zone.

How can I improve my football skills?

There are a few different keys to improving one's football skills, which most prominently include practicing, exercising, and studying the game. As the old saying goes, practice makes perfect. Additionally, exercising and studying the game help reinforce muscle memory and allow one to utilize a heightened football IQ to make heads-up plays others may not even think to attempt.