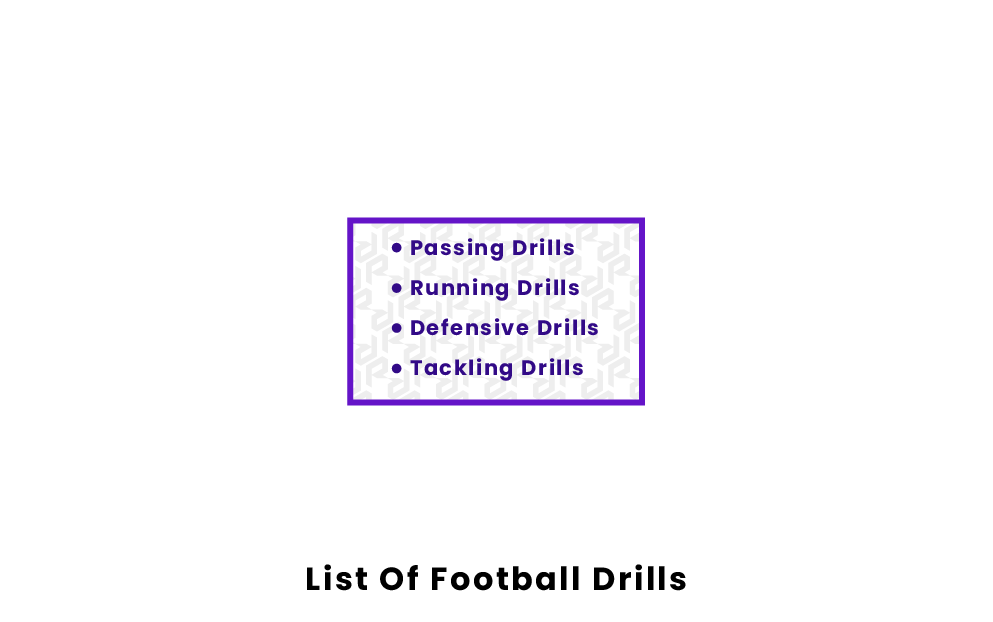 In order to dominate on the gridiron, you must practice all aspects of the game of football. The list below will explain drills for passing, running, defense, and tackling. While you may be limited to one position on the field, it is important to know the rest in case of emergency situations.

What are the most popular football drills?

Roll out is a passing drill that focuses on making accurate throws on the run. A quarterback will set up with the ball and take a seven-step drop, including a roll out either to the left or right side. A stationary target will be in place, and the QB will throw the ball to the target after completing the roll out.

Throwing routes are one of the most important passing drills, as it gives quarterbacks the confidence to accurately throw the ball during a game. Lined up with a receiver either to their right or left, the quarterback will snap the ball and throw to the target as they run the specified route. The most common routes include a slant, out, in, curl, go, corner, and post.

Change of Direction is a running drill that focuses on both footwork and ball handling. The running back will line up seven yards behind the QB, who will take the snap and pitch the ball either to the right or left. The running back will run around a cone that designates the tight end. Five cones will be placed ahead in a zig-zag pattern. The running back will go through the cones by changing their direction and switching the ball between both arms. The drill finishes with a short sprint after the last cone.

The blast read is a running drill that helps running backs read and then explode down the field. The running back will be in a two-point stance behind the quarterback to start. After the snap, the runner will take the ball up the middle of the field. They will approach a coach with a bag in their hand. The coach will signal the RB to make a move either to the right or left side of the bag. After the cut, the running back will run around a cone and sprint up the field towards the end zone.

The gauntlet is a running drill that focuses on ball handling under duress. To set up, two lines of players will form a tunnel for about 10 yards. A running back will be given a ball and directed to run through the tunnel. As they make their way through the tunnel, the players in line will attempt to make them lose the ball. They can either slap, grab, or punch at the ball in order to make the running back lose possession. The goal for the RB is to make it through the gauntlet without losing the ball.

The backpedal, turn, and catch defensive drill helps with footwork and decreases reaction time when turning around. To start, a defensive back will stand about 25 yards from a coach, facing away from them. On the whistle, the DB will backpedal towards the coach. After a minimum of ten yards, the coach will yell the command “ball.” This signals the defender to turn around and catch a ball that is thrown at them. They will then sprint past the coach to finish the drill.

The ballhawk defensive drill helps defenders learn to be quick on their feet when reacting to a pass while they are in coverage. To start, a defensive player will line up about ten yards from the coach, who has a ball in their hands. On go, the coach will either motion the football forward, backward, or to either side. The player must shuffle, backpedal, or sprint, depending on which direction the coach signals. They will follow the ball as the coach moves it around for about 30 seconds. The drill will always end with the defender sprinting towards the coach.

In this defensive drill, a linebacker will hone their pass rush form. To start, a linebacker will stand five yards from a tackling dummy in a two-point stance. On the whistle, the defender will approach the bag as the coach signals them to go either right or left. If right, the linebacker will perform a swim move on the dummy and sprint by. If on the left side, the linebacker will execute a rip technique and then sprint by on that side. Repeat in order to get used to the correct form. These moves are essential to getting pressure on the quarterback or an offensive lineman.

In this tackling drill, two players will lie down on the ground with their helmets touching. A coach will have a ball in their hand, and they will throw it to one of the players on the ground. Whoever catches the ball will act as the runner, the other as the defender. As soon as they catch the ball, both players will get up off of the ground. The runner will then try to avoid the defender, whose goal is to tackle the player with the ball.

Oklahoma is a tackling drill that helps improve overall defense. To start, two cones will be set up about five yards apart. One player will have to act as a running back, one as a linebacker, one as a defensive lineman, and lastly, one as an offensive lineman. The goal is for the defense to tackle the player with the ball, who has no choice but to run at them. The running back will choose a gap within the cones and try to escape without being tackled.

What are the most important types of football drills?

The most important types of football drills are passing, running, defensive, and passing drills. Some good passing drills are Pocket Movement, 3-5-5-7, Roll Out, and Throwing Routes. The Change of Direction (COD), Blast Read, and Gauntlet drills train running techniques. Some excellent defensive drills are Ballhawk, Pass Rush Left & Right, and the Angling Drill. Head to Head and Oklahoma are two of the best passing drills.

What are the best football passing drills?

The best football drills for passing are pocket movement, roll out, the 3-5-5-7, and throwing routes. Pocket movement helps with footwork while throwing for a run. Roll outs, meanwhile improve throwing accuracy while on the run. The 3-5-5-7 is great for practicing different types of dropbacks. Finally, throwing routes are the best drill to help quarterbacks throw as accurately and quickly as possible.