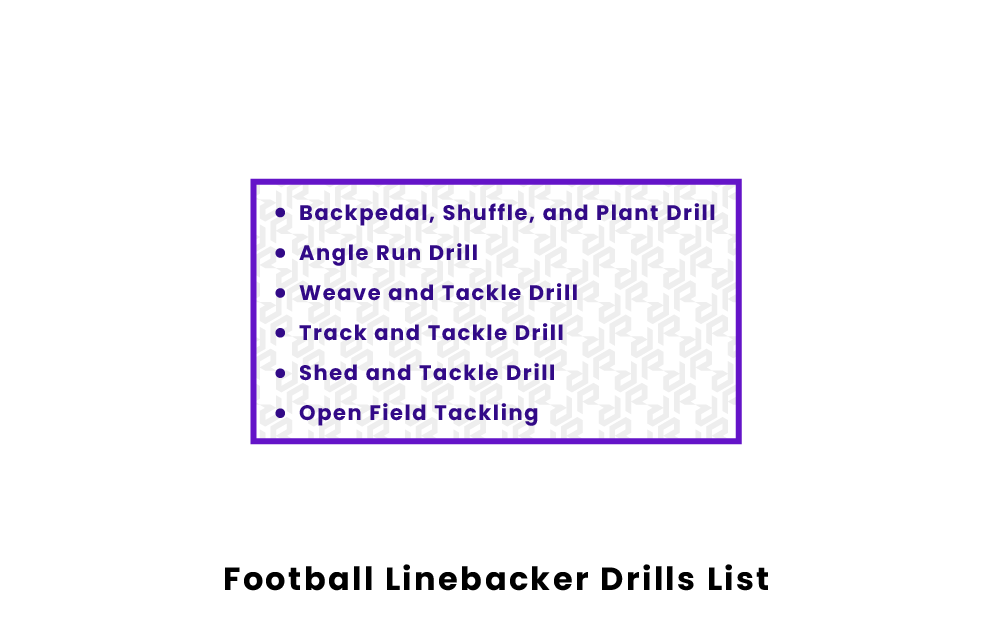 The backpedal, shuffle, and plant drill is a bag drill in which shin-height bags are placed in a row, one after another. The linebacker zig-zags through the bags by backpedaling, shuffling to the side, and then running forward.

In the angle run drill, the linebacker runs backward at a 45-degree angle using crossover steps to continually face forward toward the coach. When he reaches the boundary on one side, he runs in the other direction until he reaches the boundary on that side. He continues to run back and forth until the coach tells him to finish, at which point the player turns all the way around and runs in the opposite direction of the coach.

In the weave and tackle drill, the linebacker makes his way through two bags while staying low to the ground. The drill is finished by tackling a dummy. This drill helps linebackers work on their agility while also practicing their tackling technique.

The track and tackle drill has the linebacker start by facing a moving tackling dummy. He keeps his body square as he moves with it and eventually tackles the dummy. This drill helps linebackers practice against moving bodies with less risk of injury.

In the shed and tackle drill, a coach throws a blocking shield at the linebacker on his way to tackle the dummy. He must shed the pad and continue to make the tackle. This drill comes with a lot of variety because the coach can throw the pad from many different directions to simulate a real game environment.

What are the best drills for linebackers?

How can I become a better linebacker in football?

The best way to become a better linebacker in football is to work on your speed, agility, and tackling skills. Linebackers must act fast to block opponents without losing yardage, and they must also tackle with as much accuracy as possible. All three skill sets require a lot of practice and specific drills for weak areas.