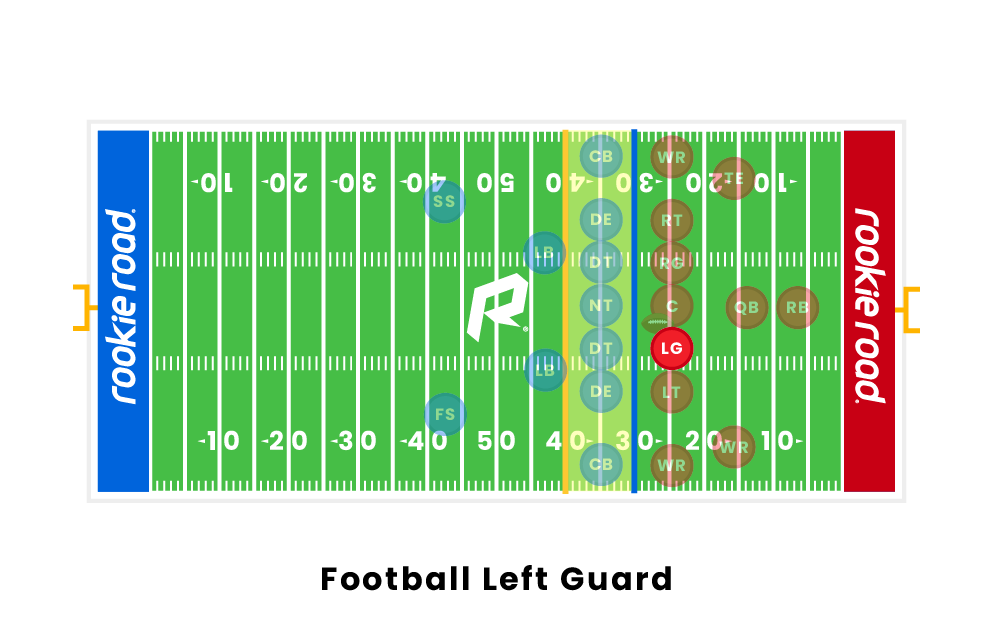 The left guard in football is one of five members of the offensive line. The player lines up directly to the left of the center. Oftentimes, the guard doesn’t share the same spotlight as the tackle, but both roles are very similar and can be equally important.

Like the other offensive line positions, the left guard is responsible for blocking on almost every offensive play. This includes both run blocking and pass blocking. Guards need to hold their ground and prevent the opposing defensive line from reaching the quarterback on passing plays and the ball carrier on running plays.

What separates a guard from a tackle is the fact a guard must often block with no additional help, particularly on blitzes. Usually, the center handles the nose tackle, and the offensive tackles block the edge rushers, but they can be supported by tight ends. That usually leaves the left guard on an island against a defensive lineman or blitzing linebacker. The left guard and right guard are very similar; however, because quarterbacks are usually right-handed, the left guard is assigned to the blind side. This makes the left guard’s role even more important, as the quarterback will have less time to react if they are beaten by a defensive player.

First and foremost, the left guard must be big enough to play the position. In the NFL, that typically means a height of between 6’3” and 6’5” and a weight between 300 and 320 lbs. This is because the lineman they’re blocking against are also massive, so left guards need to have the strength to keep up. Next, a left guard must have good footwork, agility, and short-area quickness. The footwork is important for being able to block at the line of scrimmage, whereas the other two skills give the left guard the ability to get to the second level (the place where the linebackers are lined up). Finally, no left guard, nor any offensive lineman, can do a good job without proper hand placement due to the fact that linemen mainly use their hands to block. Improper hand placement can lead to penalties or defensive breakdowns.

What is a left guard in football?

The left guard is a position in football and is one of five offensive linemen. They line up on the left side of the offensive line, next to the center. Left guards are typically large, strong, and skilled players that assist the offense by blocking the opposing defense.

What does a left guard do in football?