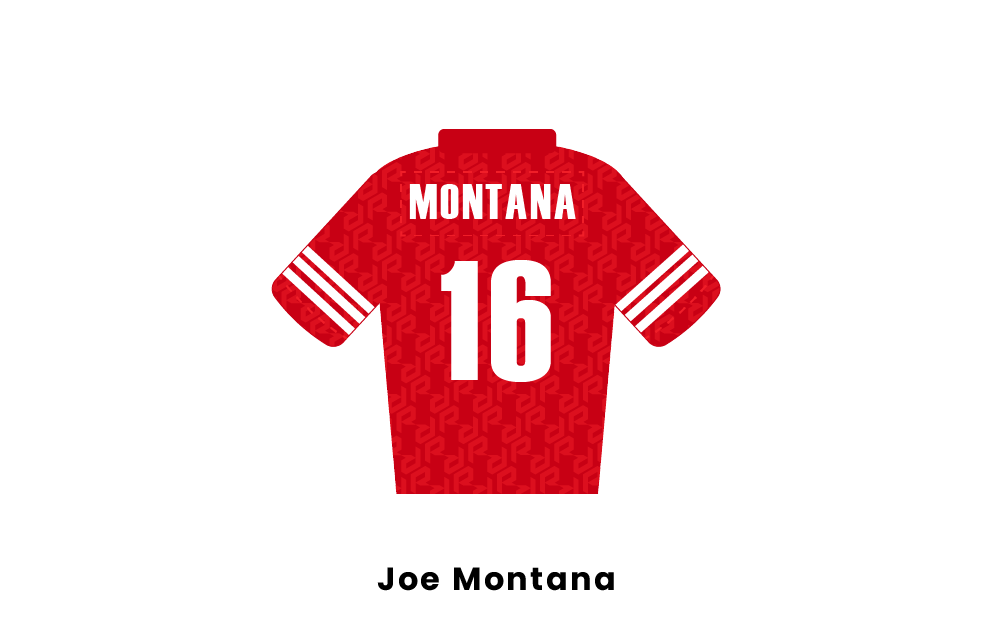 Joe Montana is often regarded as one of the greatest quarterbacks in NFL history. He played the majority of his career (13 out of 15 total years) with the San Francisco 49ers. Montana led the 49ers to four Super Bowl victories, winning Super Bowl MVP three times. He also won league MVP twice. He is well-known for his late-game heroics and for leading dramatic comebacks, a trait for which he earned his famous nickname, “the Comeback Kid.”

Attending Notre Dame, Montana played three years as a college football quarterback, though an injury kept him out of his sophomore season. There were questions regarding Montana’s arm strength coming out of college, and in the 1979 NFL Draft, Montana was taken by the 49ers at the end of the third round.

Montana eventually got traded to the Kansas City Chiefs in 1993. He played two seasons with the Chiefs. He led the Chiefs into the playoffs in consecutive seasons before deciding to retire. In 2000, just five years after his retirement, Joe Montana was inducted into the Pro Football Hall of Fame.

After being drafted in 1979 by the San Francisco 49ers, Joe Montana took over as a starter in his second season. Montana was one of the most accurate and consistent NFL Quarterbacks. Across his career, he completed over 63% of his 4600 pass attempts.

Montana was an incredibly clutch player. He led 26 fourth-quarter comebacks throughout his career. He also led 28 game-winning drives. This ability to pull through when he was needed most helped earn him the nicknames “Joe Cool” and “The Comeback Kid.” One of his most impressive accomplishments was mounting a 92-yard game-winning drive in the final seconds of Super Bowl XXIII.

Another of Joe Montana’s most famous moments was “The Catch.” With only 58 seconds left in the 1981 NFC Championship game, Montana rolled out and threw a game-winning touchdown pass to a leaping Dwight Clark in the back of the end zone. This completed the 83-yard drive that Montana had called.

Joe Montana had what was easily one of the most successful careers of any NFL player. He was an elite player with four Super Bowl wins, sharing second place on the list of quarterbacks with the most Super Bowl wins of all time, alongside Terry Bradshaw. Tom Brady is the only quarterback who eclipses Montana and Bradshaw in Super Bowl wins, having seven of them. Montana also won an impressive three Super Bowl MVPs during his career.

Montana was named the NFL MVP in both 1989 and 1990. Throughout his career, he had the highest passer rating in the NFC five times. He was selected to a Pro Bowl team eight times. He was also named an All-Pro six times.

In 2000, Montana was inducted into the Pro Football Hall of Fame.

Joseph Montana was born in New Eagle, Pennsylvania, in 1956. In high school, Montana played basketball and football. He received a scholarship to play basketball at North Carolina State University. He ended up heading to Notre Dame to play football. He had to work his way onto the field, but eventually led Notre Dame to a National Championship (1977) and a Cotton Bowl victory (1979).

Following retirement, Montana moved to Northern California wine country and has kept a low profile. He and his wife, Jennifer, have four kids. The two youngest played football at Division 1 colleges.

What teams did Joe Montana play for?

Was Joe Montana good during the playoffs?

Joe Montana is considered one of the greatest postseason quarterbacks of all time. He played 23 postseason games and won 16 of them. He went 4-0 in Super Bowl games. When in the playoffs, Joe Montana always came through. Past teammates have described the immense confidence they had in Montana heading into a playoff game.

Who was the best player Joe Montana played with?

Jerry Rice, the greatest wide receiver of all time, was the best player to play alongside Joe Montana. Rice was drafted by the 49ers after Montana had already won two Super Bowls. They would go on to win two more together. This duo brought two all-time NFL greats together and created one of the deadliest combos in NFL history.