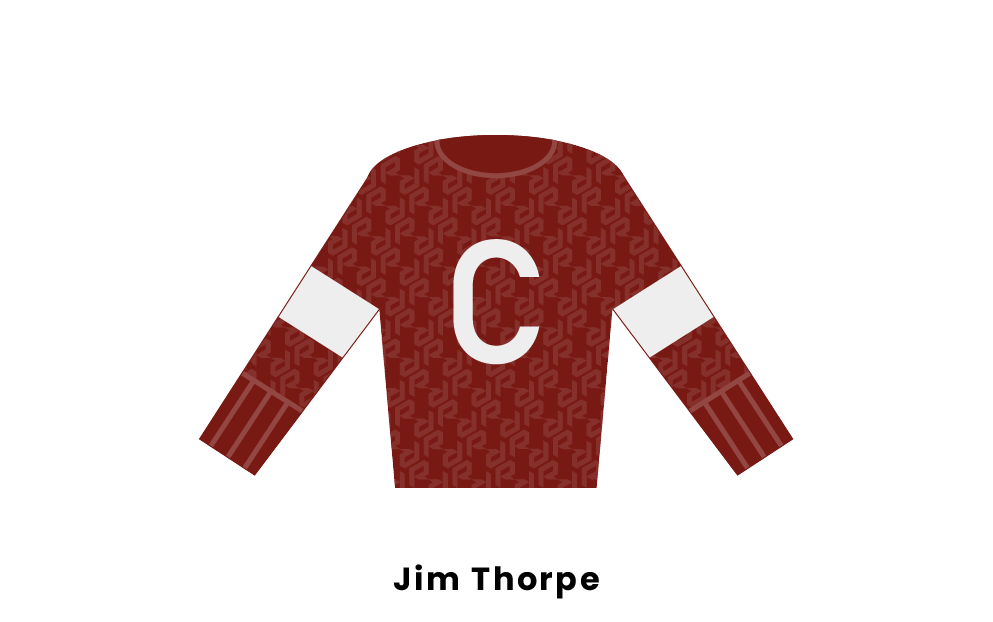 James Francis Thorpe, or Jim Thorpe, was born on May 28th, 1888 in Oklahoma. Thorpe is regarded as one of the most accomplished athletes in the history of sports. Thorpe was an American Indian of Sauk and Fox descent and he attended Haskell Indian School in Lawrence Kansas and Carlisle Indian Industrial School. Thorpe was known for his amazing talents while playing football for Carlisle and was chosen to be a halfback on Walter Camp’s All-American teams in 1911 and 1912. Thorpe possessed amazing speed, power, kicking, and many other fantastic abilities that separated him from his teammates and opponents.

In 1912, Thorpe traveled to Stockholm, Sweden to participate in the Olympic Games, where he won the decathlon and the pentathlon. However there was proof that Thorpe had played semi-professional baseball in his past, which unfortunately deprived him of his victory and he lost his gold medals.

Jim Thorpe was recognized as one of the greatest football players in the history of the sport before the National Football League even existed. Thorpe started his football career in 1919 and it ran until 1926. Thorpe spent two seasons with the OOrang Indians. For the 1920-21 season, Thorpe served as the first president of the American Professional Football Association, which would later become the NFL.

However, Thorpe was not just recognized for his amazing football abilities, Thorpe was also very skilled and talented in many other sports. Thorpe excelled in basketball, boxing, lacrosse, swimming, and hockey, which made him to be celebrated by being one of the greatest athletes of all time.

Since Jim Thorpe was one of the first athletes to help create and start the National Football League, there were not many awards or titles Thorpe could win during his time as an athlete. In 1912, Thorpe traveled to Sweden to participate in the 1912 Olympic Games, where he won the pentathlon and decathlon. These titles were later taken away from Thorpe because he was caught lying about his sports history, but were given back to him in 1983. Jim Thorpe also won the SI’s All-time College All-Stars award.

In 1954, after Thorpe’s death, the Mauch Chunk and East Mauch Chunk communities in Pennsylvania merged to create the borough of Jim Thorpe. A year later, the Jim Thorpe Trophy was created and has been awarded annually to the most valuable player in the NFL. The Amateur Athletic Union restored Thope’s amateur status in 1973, but the International Olympic Committee did not recognize his amateur status until 1983.

James Francis Thorpe, or Jim Thorpe, was born on May 28, 1888 in Prague, Indian Territory in what is now recognized as Oklahoma. Thorpe was recognized as one of the most accomplished all-around athletes in history and as the best gridiron football player from the first half of the 20th century.

Thorpe played sports until he was 41 and his career ended around the time of the Great Depression. Thorpe also suffered from alcoholism, was married three times, and had eight children in total. Later on in life, Thorpe suffered from heart failure and died on March 28, 1953 in Lomita, California. After his death, Thorpe was continually recognized for his athletic excellence and was inducted into the Pro Football Hall of Fame in 1963.

What was Jim Thorpe’s birth name?

What was Jim Thorpe famous for?

Thorpe was known for his incredible athletic skills and for helping start the sport of football and what is now known as the National Football League. Without Thorpe football would not be where it is today and all of the ground work that Thorpe had laid down would not be set for future generations of players to come.

Did Jim Thorpe ever get his Olympic medals back?

During the 1912 Olympics in Sweden, Jim Thorpe won the decathlon and the pentathlon. At the same time Jim Thorpe was still playing football and semi professional baseball. Since Thorpe was being paid for playing baseball he was not allowed to participate in the Olympics, so Thorpe was stripped of his gold medals. In 1982, after Thorpe’s death, it was decided that the medals would be returned to him by the International Olympic Committee in Lausanne, Switzerland.

What happened to Jim Thorpe’s shoes before the Olympics?

At the 1912 Olympics, Jim Thorpe’s shoes were stolen. Thorpe’s final event was the decathlon and as he was ready to compete against the local favorite Hugo Wieslander, but found that someone had taken his shoes. At the last minute, Thorpe found a mismatched pair of replacements from a trash can and can be seen wearing them when he won the gold medal that day.