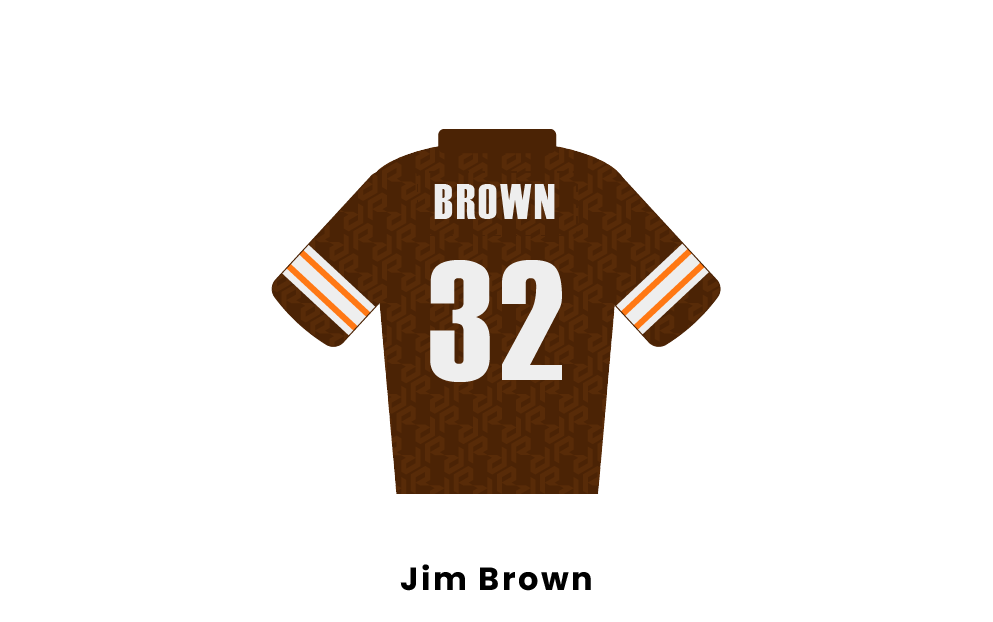 James Nathaniel Brown is a retired professional football player, analyst, and actor. Born on February 17th, 1936, in St. Simons, Georgia, he would eventually become one of the greatest football players of all time. Brown played at Syracuse University, where he had a stellar collegiate career before going on to have an even more impressive professional career with the Cleveland Browns of the National Football League.

Throughout his time in professional football, Brown claimed an immense number of awards and recognitions, including an NFL Championship, NFL Rookie of the Year, nine Pro Bowl selections, four NFL Most Valuable Player (MVP) Awards, and more. He also had his jersey number, 32, retired by the Browns, and the number 44 retired by Syracuse University.

Following his football career, Jim had a solid career as an actor in multiple films before serving as a sports analyst for CBS in 1978. Brown is currently married to his second wife, Monique, and has five kids across his two marriages.

Jim Brown had an excellent football career both collegiately and professionally. His football career started at Manhasset High School in Manhasset, New York, before he was recruited to play collegiately at Syracuse University. Brown played four years at Syracuse, where he was a star in multiple sports, including football, basketball, and lacrosse. In his senior year, Brown was a first-team All-American and finished fifth in Heisman voting. He set records at Syracuse for highest season rush average and most rushing touchdowns in a single game.

Brown was drafted as the sixth overall pick of the 1957 NFL Draft by the Cleveland Browns. In his first season, he led the team, winning NFL Rookie of the Year and already setting league records. By 1958, Brown had broken the NFL’s single-season rushing record with 1,527 yards and also took home the Most Valuable Player award for that season. After his nine-year career with Cleveland, Jim Brown had broken even more league and franchise records, including single-season and career rushing yards, career touchdowns, and career rushing touchdowns. He was selected to the Pro Bowl in each of his nine seasons and was voted the NFL’s MVP four times. To wrap up his legendary career, Jim Brown and the Cleveland Browns won the NFL Championship in 1964, the year before his retirement.

Professionally, Brown’s accomplishments are even more impressive. Brown became an NFL champion in 1964 with the Cleveland Browns. Throughout his nine-year career, he was a nine-time Pro Bowler, eight-time first-team All-Pro, four-time NFL Most Valuable Player, NFL Rookie of the Year. Brown led the league in rushing yards for eight seasons and in touchdowns for five seasons.

Following his football career, Brown was selected as a member of the NFL’s 50th, 75th, and 100th Anniversary All-Time teams and had his #32 jersey retired by the Cleveland Browns, as well as his #44 jersey retired by the Syracuse Orange. Brown is also a part of the Pro Football, College Football, and National Lacrosse Halls of Fame.

Aside from his hall of fame football career, Jim Brown’s personal life has been eventful and filled with numerous familial and legal troubles. He married his first wife, Sue, in 1959, and the couple had three children together: Kim, Kevin, and James Jr. However, they later divorced in 1972 due to accusations of gross neglect on Jim’s part. Between 1965 and 1999, Brown faced multiple legal issues, including being charged with assault and battery, sexual assault, vandalism, and assault to commit murder. However, most of these charges were dropped, aside from a vandalism charge that landed him in jail for three months in 2000.

Legal issues aside, Brown married his second wife, Monique in 1997 and the couple had two children named Morgan and Aris. The two have had their fair share of incidents, including Brown’s vandalism of his wife’s car, but they are still together.

What did Jim Brown do after retiring from football?

Jim Brown had a very different path following his football career than most NFL players today. Before his official retirement from football, Brown appeared in the 1964 action film called Rio Conchos. After his retirement from the NFL, he continued to act in numerous MGM films throughout the 1960s and 70s, most notably the hit movie The Dirty Dozen. Brown acted in films and T.V. shows up until 2004, when he last appeared in Sucker Free City. For a short period, Brown became a sports analyst for CBS in 1978, but quickly ended that venture to continue acting. In 1988, Brown founded the Amer-I-Can Foundation to support at-risk youth.

Did Jim Brown play any other sports?

Yes, during his time at Syracuse University, Jim Brown was outstanding at numerous sports. Aside from football, where he obviously excelled, Brown played basketball, track and field, and, most notably, lacrosse. Brown’s performance on the lacrosse field was almost as amazing as his output on the football field. During his collegiate lacrosse career, Brown received All-American honors for the sport and was also inducted into the Lacrosse Hall of Fame! Many refer to Brown as the greatest college athlete of all time.

Yes! In fact, Jim Brown has two separate numbers retired. Brown’s #32 was retired by the Cleveland Browns as a recognition of his excellent professional career. Additionally, Syracuse University retired Brown’s #44. Syracuse decided to un-retire Brown’s legendary #44 but would eventually re-retire the number years later. In 2020, Brown’s number retirement was further justified when he was recognized by ESPN as the greatest college football player of all time.

What is Jim Brown’s net worth?

Jim Brown’s estimated net worth is $50 million. His career earnings from salary, endorsements, acting, and real estate investments total up to an impressive $50 million dollar value for Brown. He played for the Cleveland Browns for nine seasons, then continued to an acting career where he appeared in over 10 films or shows. Brown also had a short stint as a sports analyst for CBS to further boost his earnings. His autobiography (1989) and documentary based on his life (2002) also added to Brown’s overall net worth.