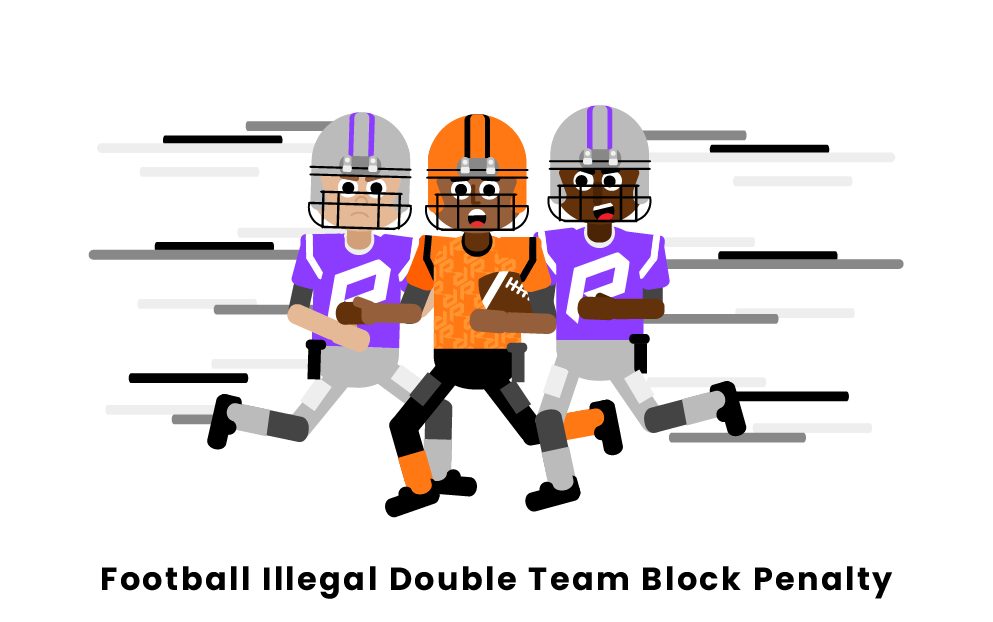 Football has a multitude of unique rules and resulting penalties. In recent years, a set of new rules have been released by the NFL to combat the high number of injuries and concussions. One of these rules is illegal double team blocking.

An illegal double team block happens when players from outside the 15-yard set up zone perform a double block on the same player. Based on new rules put into place regarding kickoffs for the 2018 NFL season, a double-team block on a kickoff is only legal if both players are from inside the 15-yard set-up zone. While there are only three players outside the set-up zone, they cannot double-team block someone trying to cover the kick. This was part of a new series of rules that came about as a result of kickoffs yielding five times as many concussions as other plays. Such rules help lower the likelihood of concussions by lowering the number of people running towards the same area. This penalty is called when one or more players from outside the set-up zone come to double-block for a kick return.

Illegal double team block penalty is unique, as it only exists in the NFL rule book. This is because the rule is new and a specific solution proposed for the concussion problem in the NFL. In 2017, concussions were roughly five times more likely to occur on a kickoff than on any other play over the course of an NFL game. With the kickoff being such an integral aspect of the sport of football, something had to be done to rectify this, as the safest course of action would have been to eliminate kickoffs from the game. The result of the penalty is the loss of 15 yards for the offending team. If the foul occurs in the end zone, the fifteen yards are marked from the previous spot. Otherwise, the loss of yards begins at the spot of the foul.

This penalty is unique in that it is very obscure, even by NFL standards. According to the NFL rulebook, there does not exist any specific penalty signal that the referee will give in order to call an illegal double-team blocking penalty.

What is a football illegal double team block penalty?

What blocks are illegal in football?

What is the penalty for an illegal double team block?

If a referee rules that one or more players from outside of the 15-yard set-up zone have attempted to perform a double block, there will be a loss of 15 yards from the spot of the foul. If the illegal double team block occurs within the opposing team’s end zone, the loss of yards will begin from the previous spot of play.