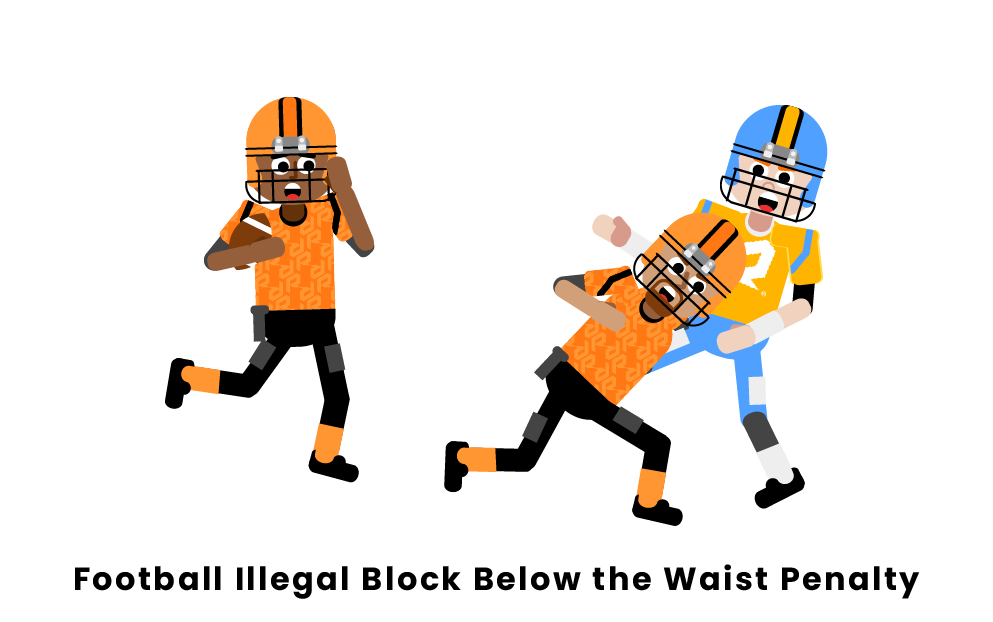 In football, a block below the waist is considered an illegal move and will be penalized if performed. The main reason this penalty exists is to lower the risk of injury among defenders. Hitting someone with your helmet below the waistline can cause major knee or leg injury, no matter how hard the contact is.

Sometimes known as a clip or chop block, an illegal block below the waist is a penalty when a blocker uses his shoulder to make contact with a defender below his belt line. It is illegal in most situations because it can cause major injury and is an unfair advantage to the blocker since the move immobilizes the defender.

Blocks below the waist mainly occur during kickoff situations but also can happen at the line of scrimmage. There are several different situations in which a block below the waist can happen. It can either occur while on the run, or in a 1v1 situation between two blockers. It is dangerous in both aspects, but especially when two people are running at high speeds.

The injuries caused from blocks below the waist are often season ending. These include ACL tears, MCL tears, along with fractured legs and ankles. A large amount of force landing or pushing through your lower body is always never good, which is why the move is deemed illegal in most football leagues. Most of the injuries are a result from direct contact with the helmet, which is made of a polycarbonate material. This can be very painful especially at high speeds.

In some cases a block below the waist can be legal, but this is in rare circumstances. The blocker performing the move below the waist has to be in line with the defender approaching them, so there is no confusion as to what type of block is being attempted. There is a very fine line when it comes to this legal block, but if performed correctly, it is very effective. The block will leave the defender scrambling to get back to his feet, usually not in time to chase down the ball carrier.

An illegal block below the waist will cost your team 15 yards. If called on the defense, the offense will also receive an automatic first down.

The signal for blocking below the waist is signaled from the referee by showing two flattened hands at the knee level. Pointing at the knees signifies that a block was made below the waist. The referee will then point to the side of the offending team with an outstretched arm.

Similar Penalties To Illegal Block Below the Waist

What is an illegal block below the waist penalty in football?

Can you ever tackle below the waist in football?

Can you challenge an illegal block below the waist?

Pages Related to Football Illegal Block Below the Waist Penalty