How Much Does An NFL Head Coach Make? 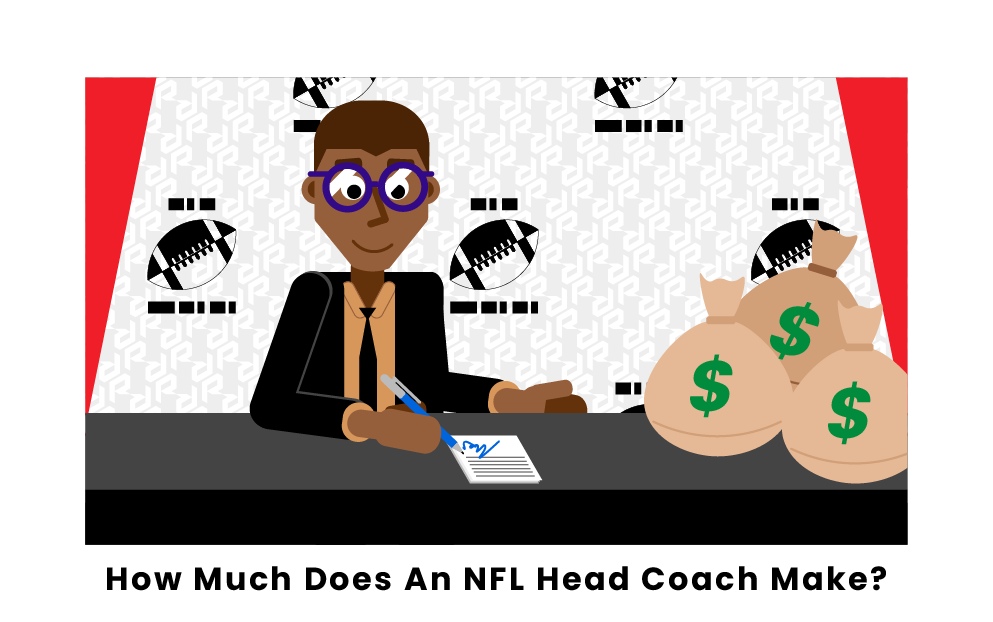 Most football fans know that NFL players make a lot of money, with deals often ranging in the millions of dollars, but how much do NFL head coaches make? As it turns out, NFL coaches also make millions of dollars a year. However, their salaries are often very different from the players they coach, and as with every sport, they vary based upon the team being coached and the quality of the players themselves. Here, we will take a look at the average salary for NFL coaches, who the highest and lowest-paid coaches are, and how these salaries compare with players.

What is the Average Salary of an NFL Coach?

Much like NFL players, NFL head coaches make millions of dollars a year, far more than most ordinary people in the workforce. These high salaries are typically the result of the great interest in football and the large amount of advertising and fan money that is funneled into the sport.

How much is an NFL Head Coach Paid?

On average, an NFL head coach makes about $6.692 million each year. This contrasts with other assistant coaches on an NFL team, who make around $5.5 million per year. Among the top ten head coaches in the NFL, salaries range between $8 million and $12 million per year.

One reason that NFL head coaches make so much money is that the position of head coach is highly sought-after in the NFL, and head coaches make up an exclusive group of only 32 people, one for each team in the NFL. Due to this, teams are extremely selective in picking a head coach, and skilled coaches can often request higher salaries from teams interested in their talents.

Who are the Highest and Lowest-Paid Coaches in the NFL?

With the average salaries listed above in mind, many people may wonder who the highest and lowest-paid head coaches in the NFL are. In general, a head coach’s salary depends upon their team's performance, meaning that teams who perform better on the field will generally have head coaches with higher salaries.

How do NFL Coaches’ Salaries Compare with NFL Players?

Considering the above salaries for NFL head coaches, many may wonder how these salaries stack up against those of NFL players, both average and exceptional. There is a great deal of variability in salary for NFL players, but many players make a lot more money than their coaches. Beginning at the low end, the NFL offers a minimum salary of $660,000 per season as of 2021, less than a fifth of the salary of the lowest paid NFL coach. This is double what the minimum player salary was ten years ago. However, many NFL players make much more than this, and some even make more than the highest-paid NFL head coach.

According to Diario AS, approximately 34 NFL players made upwards of $20 million per season in 2021. The highest-paid NFL player, quarterback Patrick Mahomes of the Kansas City Chiefs, made $45 million per season. The NFL does offer a salary cap of $180 million as the maximum possible salary a player can make, but this cap often increases and has increased by about $10 million per year since 2012.

Who is the highest-paid NFL head coach?

The highest-paid NFL head coach is Sean McVay, the head coach for the Los Angeles Rams. As of 2022, McVay’s salary is approximately $15-18 million per year, depending on performance. McVay’s high salary comes as a result of his team’s exemplary performance over the past few years, including a Super Bowl win in the 2021-2022 season.

Unlike NFL players, NFL head coaches do not have a salary cap. Therefore, they can technically be paid any amount of money for their services. It is often reputed that NFL head coaches make much more than their official salaries, and many analysts have suggested that a salary cap for head coaches should exist, but nothing has officially been implemented yet.

Do NFL coaches get a bonus for winning the Super Bowl?

While all of the players on a Super Bowl-winning team receive cash bonuses for their victory, there is no official bonus structure for NFL coaches who win the Super Bowl. However, many coaches have automatic bonus structures built into their contracts which stipulate that they will receive bonuses for a Super Bowl victory. For some high-paid coaches, these bonuses may amount to up to $2.5 million.

Pages Related to How Much Does An NFL Head Coach Make?