How Much Does An NFL Football Player Make? 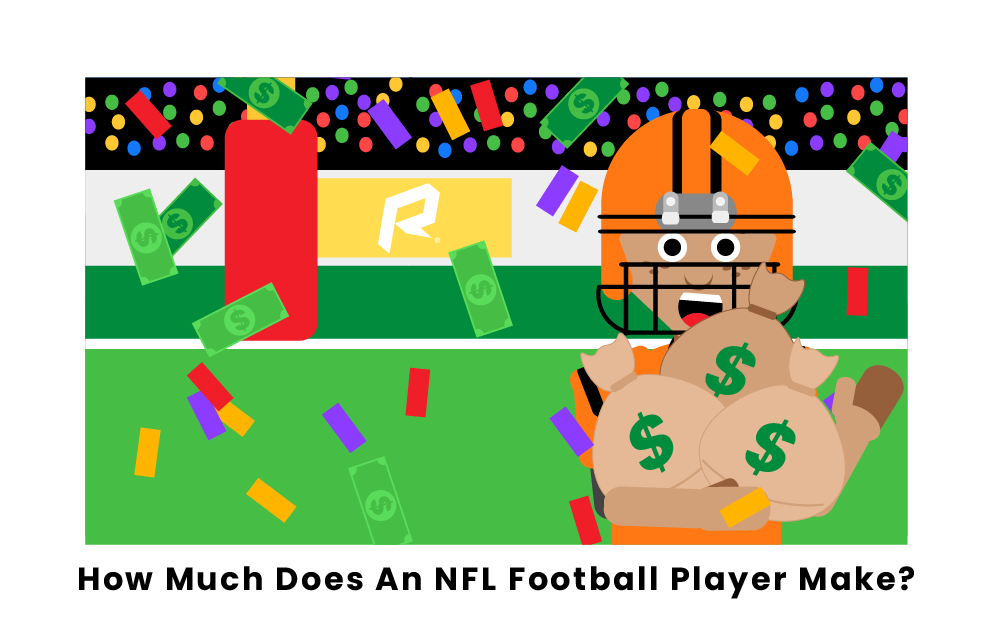 Playing in the NFL is one of the highest paying jobs in all of North America, with a median salary of over $860,000 per season in 2018. However, due to the physical nature and the limited roster space of the sport, the average career length is just a little over three years. Read below to learn how NFL players get paid and how much they tend to make.

Since 1994, the NFL has operated with a salary cap. This means there’s a maximum amount of money a team can spend on its players. The league also has a salary cap floor which means there’s also a minimum amount of money a team must spend on its players. The cap and floor work together to ensure players’ salary doesn’t get too low while also keeping a competitive balance within the league. The salary cap in 2021 was a little over $180 million, with quarterback Russell Wilson having the highest cap hit of anyone in the NFL at $32 million. The cap floor isn’t a fixed amount; rather, it’s broken into four year periods under the “Guaranteed League-Wide Cash Spending” provision. From 2017 through 2020, teams needed to spend at least 95% of the salary cap each season.

For starters, there are “fully guaranteed” contracts across the league. Fully guaranteed means a player will earn all of the money within the contract. Most of the NFL players that have fully guaranteed contracts are rookie first round draft picks on their first contracts. Quarterbacks Kirk Cousins ($35 million/1 year) and Deshaun Watson ($230 million/5 years) are two of the few veterans who’ve got fully guaranteed deals.

Most players fall under the category of “non-guaranteed” contracts. This means a player won’t necessarily make all of the money available in the contract. For example, Chiefs quarterback Patrick Mahomes signed a 10-year, $450 million contract after winning the Super Bowl in 2019-20. However, only about $140 million is guaranteed. This gives Kansas City the option to get out of the contract with little penalty after 2024, or Mahomes the ability to rework the contract to earn even more money.

This structure isn’t conventional as the other major American sports’ contracts are fully guaranteed. However, football can be an extremely dangerous sport that leads players to have shorter careers, which is why this structure is put in place.

The average salary of an NFL player in 2017 was about $2.7 million, but that’s not the best way to judge how much an NFL player can expect to make. This is because an average can be inflated by bigger contracts. The best way to estimate a player’s salary is by looking at the median salary, which was $860,000 in 2018. That means half the league makes more than $860,000, and half of its players make less than that.

For the average person, this is fantastic money; however, keep in mind the average career length is roughly three years. It’s also important to keep in mind that most players will never earn a “big money” contract. In 2018, the league median salary was $860,000. This means that half of the league that season made more than that amount, and half earned less than that amount.

While the salary seems great to the average person and NFL deals that make headlines are usually massive, there’s extremely little runway with these athletes, and very few players actually have the ability to earn those huge contracts.

How do NFL players get paid?

What is the highest paid position in the NFL?

What is the lowest paid position in the NFL?

The long snapper is the lowest-paid position in the NFL, with no player slated to make even $2 million heading into 2022. Not far behind is the fullback position, which is quickly going extinct in the NFL. However, players like Derek Watt and C.J. Ham both earn enough money to push the average over the long snapper.

Pages Related to How Much Does An NFL Football Player Make?