How Much Do Football Tickets Cost? 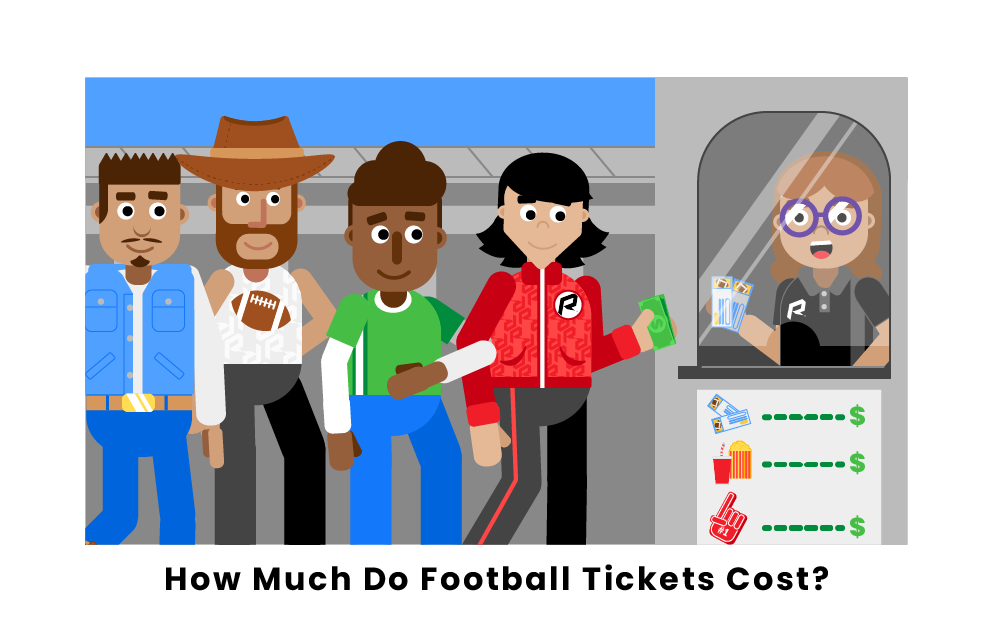 Football is one of America’s favorite fall pastimes, but if you want to see a game in person, how much is it going to cost you? Many fans of football spend hundreds of dollars a year on tickets to see their favorite teams play, either at the professional or college level. Here, we break down the average costs of tickets for football games at various levels of the sport, including the most and least expensive tickets in each category and ticket costs for important games or events.

How Much Are Football Tickets?

The price of football tickets varies depending on the level of play. NFL tickets usually cost between $75 and $200. College football tickets start off cheaper, at around $30, but can get just as expensive for the most desirable seats and games. Youth football tickets are the cheapest, typically costing less than $10.

Undoubtedly, the NFL is the primary source of football fandom in America, and thus, it makes sense that NFL football tickets will be the most expensive and sought-after tickets of all. According to data, the average price for a ticket at a regular-season NFL game is $151.

Of course, this price is an average, meaning that even tickets sold at the same stadium will vary in price, depending upon the popularity of the team, the closeness of the seats to the field, and other such factors. Better seats will often fetch prices of $200 or more, while seats very high in the stadium, with worse views, may cost less, with some going for less than $100.

NFL ticket prices also vary based on the team, with more popular franchises selling more expensive tickets. As of 2020, the three most expensive average ticket prices in the NFL, by team, were tickets for games played by the Las Vegas Raiders ($153.47), the San Francisco 49ers ($139.71), and the New England Patriots ($131.45). By contrast, the three least-expensive tickets by team were for the Buffalo Bills ($74.95), the Cincinnati Bengals ($79.37), and the Los Angeles Chargers ($78.38).

As might be expected, the average cost for an NFL ticket will be much higher for playoff games and the most important game in the league each year, the Super Bowl. On average, the cost of an NFL playoff game ticket is about $270. Meanwhile, the average Super Bowl ticket, based on data from 2022, costs over $5,000. This is in addition to other expensive necessities such as parking passes, which could add anything from $200 to $500 in additional fees.

For football fans looking for a cheaper option, college football may seem like a better alternative to the NFL, as the games are just as exciting. Many NCAA Football games sell tickets that are just as expensive as NFL games. As with the NFL, the average ticket cost for an NCAA game will vary based on the team, the prestige of the school, and its standing in rankings. On average, this means that NCAA football tickets can cost as little as $30 but typically average around $175, which is actually more expensive than the average NFL ticket.

As of 2022, the most expensive tickets in college football belong to the Ohio State Buckeyes, whose tickets sell for an average price of $403. This price is followed by Notre Dame Fighting Irish tickets at $389 and Ohio State Buckeyes tickets at $352. Tickets on the lower end of the NCAA spectrum include the Missouri Tigers ($135), the Tennessee Volunteers ($138), and the TCU Horned Frogs ($141).

Like the NFL, college football also has playoff games and championships, which are often known as “bowl games,” including famous events such as the Rose Bowl, the Orange Bowl, and the Sun Bowl. Tickets for bowl games vary in price between $25 and $300, while the average cost for a College Football Playoff (CFP) game comes in at $1,200.

A final form of football that many fans, especially the parents of athletes, like to enjoy is youth football, such as high school varsity football and other younger football leagues. Across the country, ticket prices for high school and youth football are generally standardized, with varsity football games usually costing $6 to $8 per ticket and middle-school games typically costing around $3 per ticket. Many schools and leagues will also offer discounted prices for students, parents, and other types of fans. Revenue from these ticket sales typically goes to the hosting school.

Football is a fun activity for fans of all ages, and watching games in person is a common goal for many avid fans. While some football tickets are expensive, costing hundreds of dollars a person, the sport remains an intensely popular activity, and fans around the world consider the high prices more than acceptable for the chance to see their favorite teams and players in person.

How much do NFL tickets cost?

The average ticket price of an NFL regular season game is $151 for the 2022 season. However, tickets to playoff games, rivalry matchups, and the Super Bowl are much higher than this average. The average cost of NFL tickets is higher than most other major sports leagues in the United States.

How much do college football tickets cost?

The average ticket price for an NCAA regular season game is around $175. Even though this is higher than the average ticket cost for an NFL game, there is much more fluctuation in college football ticket prices. In fact, depending on which teams are playing and hosting, college football tickets can cost as little as $30, making them a very valuable option for football fans on a budget.

How much do youth football tickets cost?

Ticket prices for youth football tickets, most commonly for high school football games, are typically very low and vary from school to school. Most of the time, high school varsity football game tickets will cost around $6 to $8, while a middle school game ticket will cost around $3. Prices will typically be even lower at many schools thanks to discounts for faculty, parents, and students (though this also varies from school to school).

Pages Related to How Much Do Football Tickets Cost?