How Much Do Colleges Make From Football Bowl Games? 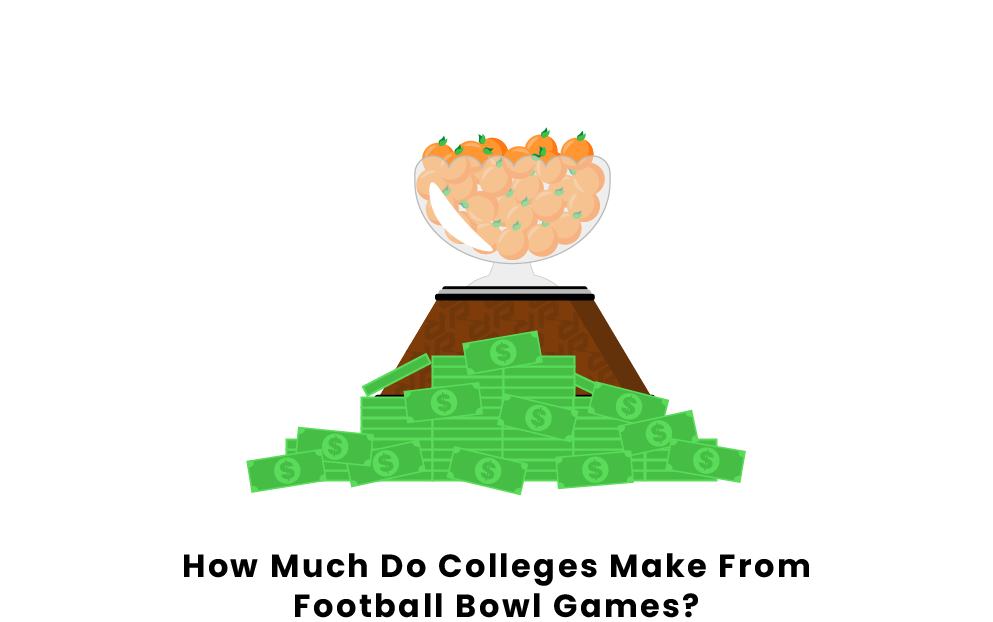 College football is one of the most lucrative sports in the United States, and the College Football Playoff is no exception. Not only does the sport generate an astonishing amount of revenue during the regular season, both from ticket sales and deals on broadcasting and advertisements, teams also receive money in various ways. One such way is through payouts for the various end-of-year games in the College Football Playoff, which are colloquially known as “Bowl Games.”

Bowl Games have a long history in the CFP, and most people have heard of the famous “New Year’s Six,” the most popular Bowl Games of every college football season. These six games (the Rose Bowl, Sugar Bowl, Orange Bowl, Cotton Bowl, Peach Bowl, and Fiesta Bowl) draw massive crowds and television viewership each year. But what payouts do college teams earn from playing in Bowl Games, and how does the process of payouts work? Read on to learn all about this aspect of the sport of college football!

Colleges do make money from playing in Bowl Games. Each year, prior to the College Football Playoff (CFP), revenue is set aside in order to set up and fund each and every Bowl Game at the end of the regular season. This money is predetermined, and is allocated based upon specific formulas used by the CFP. While the numbers of payouts are subject to change prior to the playing of the Bowl Games, they are typically consistent.

How Much Do Teams Make for Playing in a Bowl Game?

Each NCAA conference has its own rules and regulations governing how their CFP revenue can be used, such as whether monies are distributed evenly between all the teams in the conference or if bonuses are given to whichever team makes it to that conference’s Bowl Game. In addition to the revenue granted to the conferences by the CFP, additional money is often included in Bowl Game payouts that comes from some of the individual Bowl Games, specifically those which have contracts with a particular conference or conferences.

As of the 2022-2023 CFP season, the revenue breakdown for the conferences whose teams participate in the CFP is as follows:

Payouts for the College Football Playoff Bowl Games vary based upon the conference and the prestige of the Bowl Game being played. They can range from a low of $250,000 to as much as $8,252,740 for non-semifinal games and games not among the New Year’s Six.

For games that are part of the CFP tournament, payouts are generally much higher. As an example of the kinds of payouts that are common in the CFP Bowl Games, the payouts for the New Year’s Six in 2019 were as follows:

Do colleges get paid for Bowl Games?

Colleges do get paid for playing in Bowl Games. Each year, the College Football Playoff distributes revenue directly to the separate conferences of the NCAA, who then follow their own rules and regulations in distributing that money to their affiliated teams, either evenly, through Bowl Game payouts, or both. Colleges can be paid as little as $250,000 and as much as $40 million for reaching a Bowl Game.

Who gets the money from college football Bowl Games?

Money from the college football Bowl Games goes to both the colleges playing in said games and the conferences they are affiliated with. Playing in a Bowl Game is lucrative for a college, not only because they receive major payouts from the games, but also because they may be able to accumulate additional revenue, recruits, and fans due to playing on television for a yearly Bowl Game. Conferences also benefit from the games, with funds from the CFP covering the cost of hosting them and of continuing to build up their member teams in upcoming seasons.

Do conferences get paid for sending teams to Bowl Games?

Pages Related to How Much Do Colleges Make From Football Bowl Games?