How Much Can Football Players Bench Press? 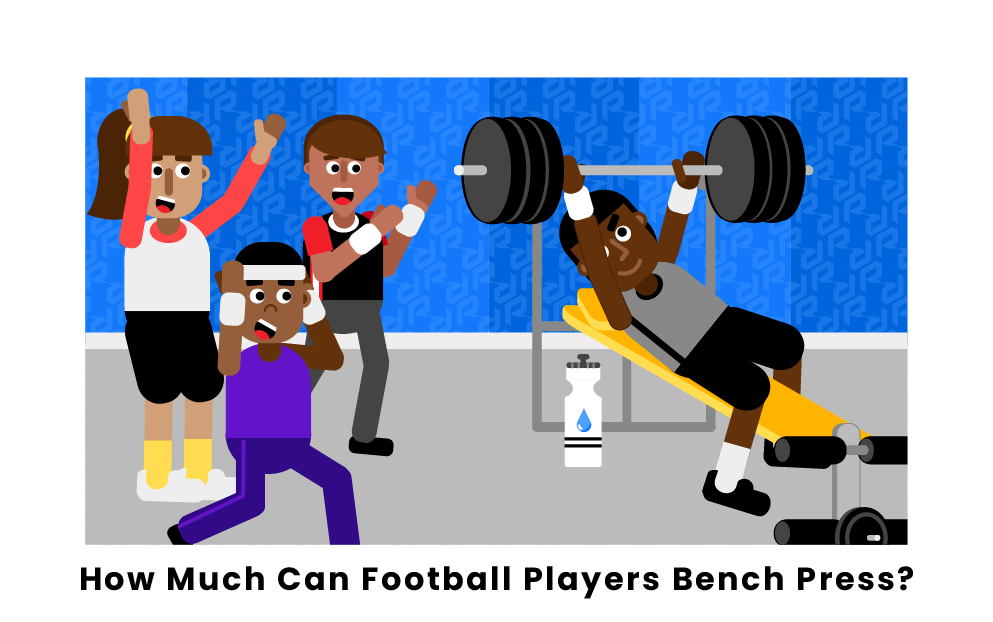 Football players are some of the strongest individuals out there, as they need to be able to take and give a hit as part of their job. One way to measure the strength of a football player is to see how much they can bench press. A bench press is the act of lifting a weighted bar, usually with heavy plates attached to it. One rep is a complete lifting of the bar from the chest, with a full extension of the arms, followed by a controlled lowering back to the chest.

Those that bench press will typically try to complete a rep with as much weight attached to it as possible, or to rep a certain weight as many times as they can. Both of these types of exercises can be measured and recorded for tracking purposes by a team, and they are helpful in evaluating a player’s strength and performative capability.

The average bench press a football player can manage is dependent on a couple of different factors. Different positions have different averages for bench pressing. This is due to the size and strength differences between the positions. For example, a quarterback likely will not be expected to do as many reps, or to press as much weight, as a lineman.

Before a collegiate player is drafted into the NFL, they must complete a series of athletic tests and measurements during a combine, including the bench press. Each player is asked to perform as many reps as they can with a 225-pound bar. Linemen usually will complete anywhere from 20 to 30 reps at that weight, the most of any position. Tight ends and linebackers average a little less than that, usually from 20 to 25, while running backs, defensive backs, and receivers fit into the 15 to 20 range. Lifting well during the combine is a great way for players to improve their draft stock and showcase their strength.

In the 2022 NFL Combine, UCLA defensive tackle Otito Ogbonnia led all players with 29 reps of 225 pounds. That number is less than in previous years, where leaders have been able to reach into the 40s with their reps.

Justin Ernest has the most reps in NFL Combine history, bench pressing the 225-pound bar a total of 51 times. Ernest was a defensive tackle for Eastern Kentucky University and set the record in 1999. Several players have challenged that total since, but it remains the most reps to date. Fellow defensive tackle Stephen Paea has come the closest with his 49 reps completed in 2011. However, despite completing fewer reps, the NFL acknowledges Paea as the combine record-holder. That is because Justin Ernest never played a snap in the NFL, despite trying out for the combine.

Pages Related to How Much Can Football Players Bench Press?