How Do College Football Teams Travel? 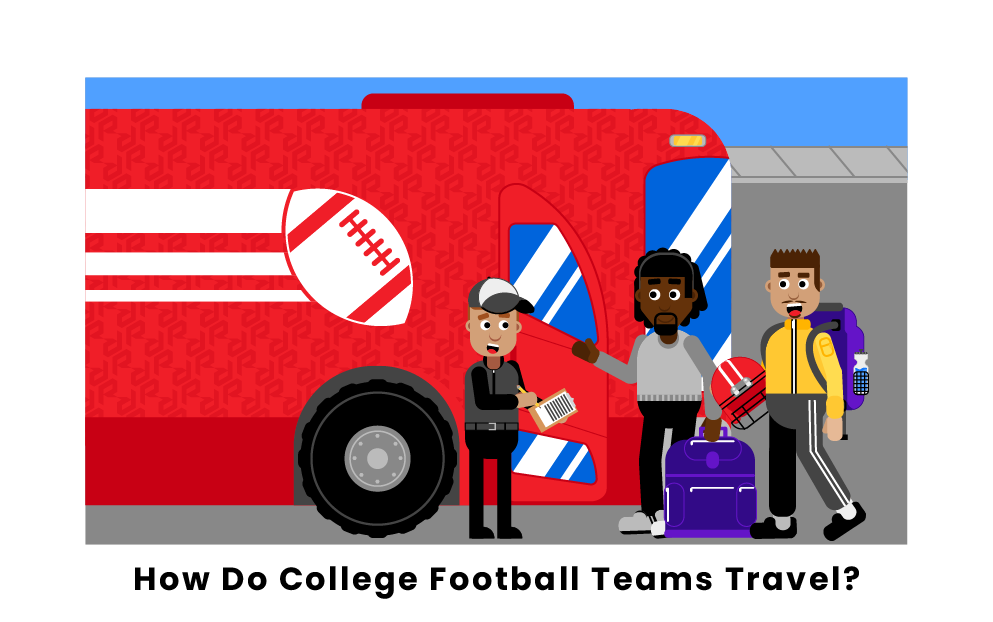 College football teams are always playing football games at home and away, and as a result, teams in the United States are traveling frequently from place to place. Have you ever wondered how exactly college football teams travel? What forms of transportation do they use? How much does traveling cost a college team? Read on to learn the answers to all these questions and more!

By far the most common and well-known method of travel for college football teams are charter buses. Even for schools that use air travel as a primary method of transportation, buses are necessary to transport teams to and from campus and airports, as well as to and from stadiums. For prominent schools, buses may be owned by the school itself, and in this case, they are often painted with the school’s colors and emblems. Other schools may not have buses of their own, and instead rent them from a charter bus company. These buses are often very comfortable, with large seats and ample storage for gear and luggage.

The major upside to traveling by bus is that it is generally less expensive than traveling by air. On average, the cost of utilizing a chartered bus for a college team is about half of using a private plane, or even a commercial flight. This reduced expense often makes up for the increased time it takes to travel places by bus.

However, that increased time is the greatest disadvantage of traveling by bus. Since driving a team to their opponents by bus takes time, not only for preparing and packing the bus, but for navigating the roadways, bus trips can be long and grueling affairs. Nevertheless, the sheer convenience of having chartered buses available makes them the most common form of transportation for college football teams.

The fastest way to transport a college football team from place to place is by air. In many cases, college teams do not travel by plane to other schools, as the cost of flying is more expensive than land-based transportation. However, in the event that a team is facing an opponent who is located in a distant state, or if they are participating in a playoff or Bowl Game in a far-off place, teams will use air travel to reach their destinations.

When traveling by air, a college football team may use private jets rented by the school. This is often the case when it comes to high-profile, top-tier schools in the NCAA’s Division I, which often have access to large pools of revenue to hire private planes. There is a distinct advantage to flying players to games, which is time. Colleges often fly players to Friday evening games, for example, and are able to have them back by the following night. This gives the athletes more time to rest and study.

The major disadvantage of traveling by air is the cost. Colleges will often have to spend hundreds of thousands of dollars to secure charter flights for their athletes. For example, when JetBlue Airlines ended their contract with Eastern Carolina University in 2017, ECU turned to Allegiant Air, paying them $430,000 for the use of charter flights throughout the 2017 season. In the future, due to conference realignments, it seems likely that air travel is set to become even more common in college football.

How do college football teams travel?

College football teams travel to games primarily by airplanes and chartered buses. For games which are far away, or in the case of schools with large traveling budgets, private planes are a common means of travel, though they often cost hundreds of thousands of dollars each season. Chartered buses, often owned or rented by the school, are about half as costly, and are excellent for travel between schools that are relatively near to each other. Buses are generally the most common and visible means of transportation in college football.

Yes, college football teams do stay in hotels quite often, not only during away games, but also even for home games. For road games, the practice of staying in hotels is obviously necessary. However, many college coaches have used millions of dollars on securing hotel stays for their athletes during home games as well, arguing that the ability to stay in the same hotel and share meals increases camaraderie and morale amongst the teammates.

Pages Related to How Do College Football Teams Travel?