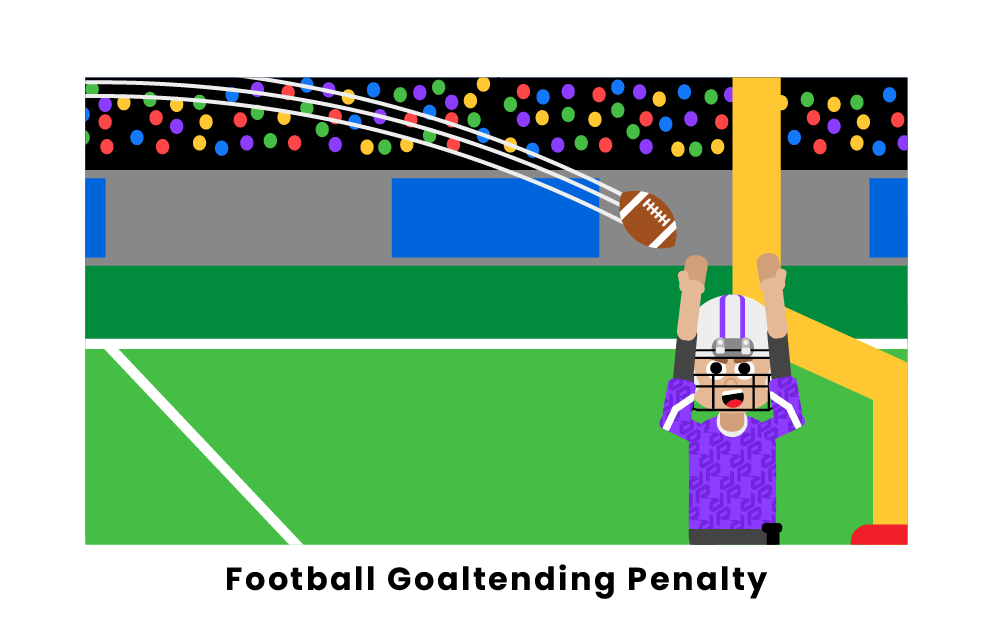 At 6’10”, Morris Stroud is one of the tallest players in NFL history. He played his entire career on the Kansas City Chiefs. Stroud was so tall that he was used on special teams as a field goal blocker from under the goalposts. When the NFL decided to make goaltending illegal, it was known as the Stroud Rule. Learn all about goaltending and why it is a penalty in American football.

Goaltending in American football is defined as a player jumping and attempting to swat or deflect the other team's kick as it goes through the goal post. In some situations, if it was clear the ball was going through the posts, the referee will just count the field goal as good, similar to goaltending in basketball. Since it is an unsportsmanlike conduct penalty, the most likely situation is that the offense will gain 15 yards and an automatic first down. The offense then continues their drive. The field goal does not need to count if your offense can continue driving for a touchdown. Teams would rather try for seven points than settle for three. Worst case scenario, the offense can always try a shorter field goal later in the drive.

Goaltending in the NFL is organized in the rulebook under “fouls to prevent score” which falls under unsportsmanlike conduct. This is an unsportsmanlike conduct penalty, which means the referee turns their body into a T-shape and then points to the side of the ball that committed the penalty. With this penalty the referee will always point to the defending team because the kicking team would never try to illegally block their own kick.

What is goaltending in football?

Goaltending is a penalty in football when a player stands under the goalpost and attempts to jump and swat a field goal attempt while it is on its way down. It was implemented after players, mainly 6’10” Morris Stroud of the Kansas City Chiefs, would stand under the goalpost and block kicks on their way down. Now, field goals can only be blocked on their way up, not when they are on a downward trajectory.

Why is the goaltending penalty also called the Stroud Rule?

The goaltending penalty is also referred to as “the Stroud Rule” in reference to Morris Stroud, a famous NFL tight end who played for the Kansas City Chiefs from 1969 to 1974. Standing at a height of 6 feet, 10 inches, Stroud was tall enough to jump vertically in such a way that he could often deflect kicked balls that were going through the goalposts for a field goal. As a result of this very effective strategy, the NFL created the Stroud Rule, which forbade tending the goalposts during a field goal attempt.

Can you challenge a goaltending penalty in football?