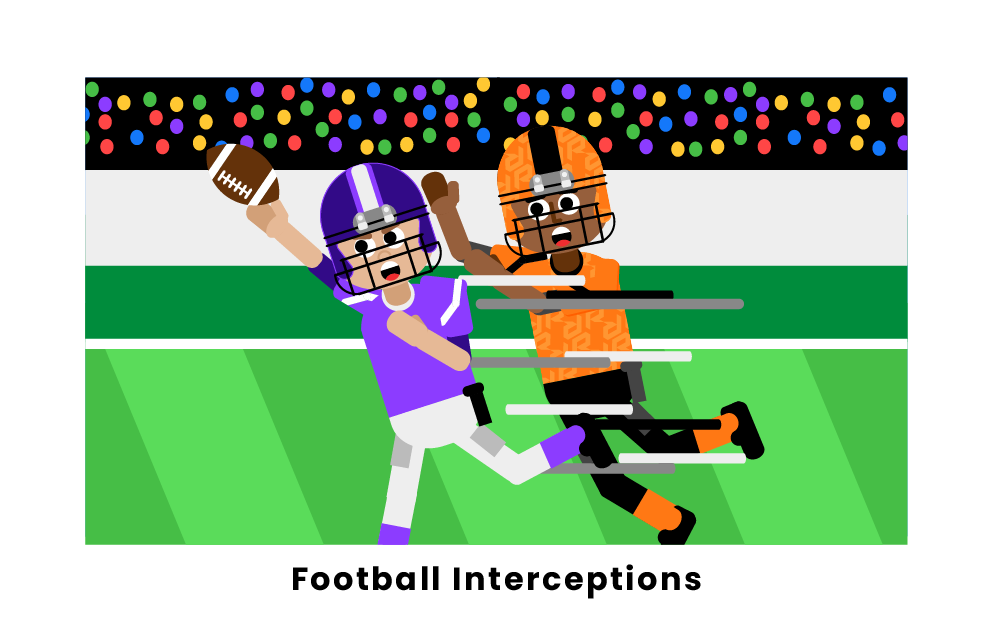 What is an interception in football?

When a defender catches a pass from a player on the offense, it is called an interception. An interception is counted as a turnover. Read on to learn more about interceptions and how they work in football.

Interceptions occur in football where the pass thrown by the quarterback is caught by a defender rather than a receiver, resulting in a turnover. Interceptions are key statistics in evaluating quarterbacks and defensive backs production throughout a season or career.

The rules regarding interceptions are the same as those surrounding a regular catch. The defender must have two feet in bounds and maintain possession of the ball all the way to the ground. In many cases, the player who makes the interception will fall to the ground but will not be down by contact, allowing him to get up and run for as many yards as possible.

If an interception is made in the end zone, then the player with the ball can elect to take a knee rather than run for more yards. Taking a knee in the end zone guarantees the offense taking the ball at the 25-yard line. If the interception is made in the field of play, then the defender can also take a knee if they just do not want to run it back.

Interceptions that are returned for touchdowns on two-point conversion attempts are only worth two points, rather than six.

What is a pick six in football? When the ball is intercepted, the defensive player can return the ball in the opposite direction to the opposite team's end zone for a touchdown. This is called a pick-six. If the defender is tackled with the ball, he is called down and his team's offense will take over the football.

Paul Krause is the NFL leader in interceptions with 81 career picks, followed closely by Emlen Tunell with 79 and Rod Woodson at 71.

Rod Woodson has the most career pick-sixes with 12 interceptions returned for touchdowns.

Most NFL Interceptions In A Season

Night Train Lane set the record for most interceptions in a single season with 14 in 1952.

What is an interception in football?

What is a pick-six in football?

In football, a pick-six is when a defensive player intercepts the ball and then runs the ball to score a touchdown in the same play. Pick-sixes are a dream scenario for any defense, but they are very difficult to pull off. Despite their rarity in real play, Rod Woodson successfully ran 12 pick-sixes during his NFL career with the Pittsburgh Steelers.

Do interceptions count on two-point conversions?