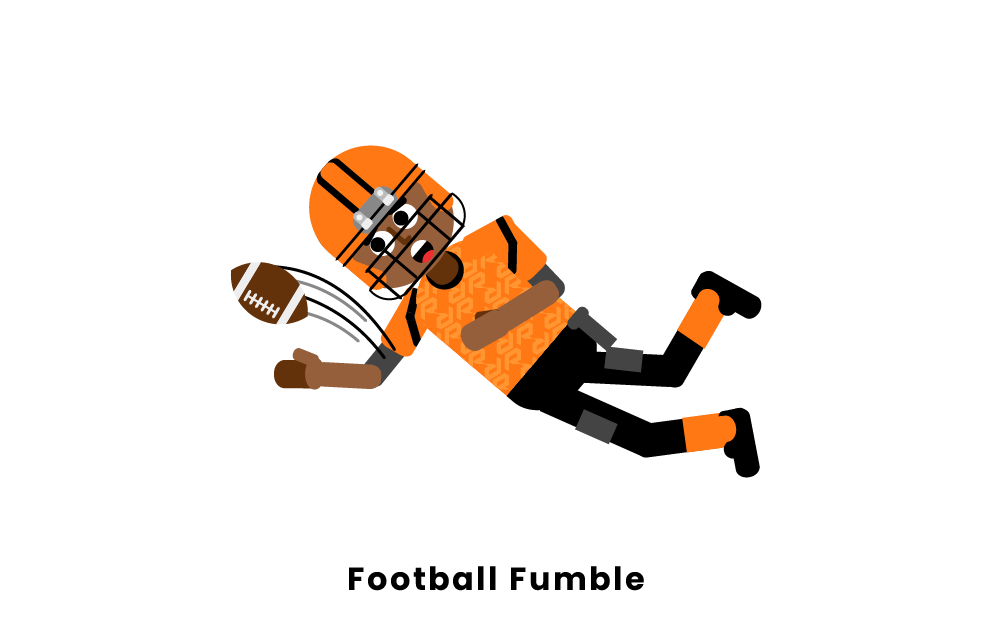 In football, one of the most dreaded words on either side of the field is “fumble.” Fumble is a term that refers to any scenario in which a ball carrier drops a ball that was previously under their control. No matter the level of football, a fumble is frustrating for the fumbling team, just as it is joyful for the recovering team. Read on to learn all about fumbles, including how they happen, what kind of injuries they can cause, and what the rules are concerning what happens after a fumble.

What is a Fumble in Football?

You can recognize a fumble as having happened whenever a player with the ball drops it, loses control of it, or has it dislodged from his grip by another player. Fumbles must happen before a player is tackled or runs out of bounds. In particular, a fumble can only happen when a player is not already down by contact. In the NFL, “down by contact” refers to when any part of a player’s leg above the ankle, or any part of his arm above the wrist, touches the ground. If a fumble occurs on a play, but the referees determine that the fumbling player was down by contact before the ball was completely loose, the fumble does not count.

Almost any means of the player dropping the ball counts as a fumble, whether the player loses his grip on the ball or an opposing team member pushes it out of his hands. Whoever gets possession at the end of the fumble keeps the possession.

Fumbles can occur in various play scenarios. They most-commonly occur on running plays, but they can also occur during a lateral pass, where a player attempts to pitch the ball back to another teammate. If the ball is dropped or missed on a lateral pass, it is a live ball. If the ball rolls out of bounds after being fumbled, the team who fumbled retains possession of the ball and the ball is placed at the spot of the fumble. Before a fumble can occur, the player carrying the ball must declare possession by making a “football move,” i.e. bringing the ball to the chest, taking multiple steps, etc.

What Happens After a Fumble in Football?

A defensive player recovers the ball.

An offensive player recovers the ball.

The ball goes out of bounds.

These scenarios also largely depend on where the fumble takes place. It can prove very easy for a player to return a fumble for a touchdown if the fumble occurs near the opposing team’s own end zone, and on the other hand the recovering team can be ruled down for a touchback when a fumble occurs in the defensive team’s end zone.

In addition to these scenarios, all fumbles in the NFL are automatically reviewed by game officials. Unlike other review scenarios, such as challenges over possession or penalties, teams are not charged a timeout during a fumble review, as this is considered a mandatory official review. Fumble replay reviews either result in confirming a fumble and recovery, or in declaring a fumble invalid due to various factors, such as a player being down by contact, out of bounds, etc.

Since loose footballs can bounce in any direction, it can be dangerous for players to go after them. Many coaches prefer their players to fall on the ball to regain possession. This eliminates the possibility of injury, since many pileups occur at the sight of a fumble. A player should fall on top of the ball, hugging it tightly to their stomach with their head tucked in until the official signals a stoppage in play.

Do referees automatically review fumbles in the NFL?

Yes, fumbles are automatically reviewed by referees in the NFL. This is part of the general review process, as every turnover in the NFL, including turnovers on downs, interception, and fumbles, gets reviewed no matter how clear cut the ruling seems.

What is the difference between a fumble and a muffed ball?

In football, there is a difference between a standard fumble and what is referred to as a “muffed ball.” While a fumble results from a player with possession dropping the ball, a muffed ball occurs when a player is attempting to gain possession of the ball and fails to do so, but briefly comes into contact with the ball during the attempt. The most common version of this is a “muffed punt,” where a player is setting up to catch a punt, but it falls through their hands when they make a catch. Because the player failed to establish possession before losing the ball, a muffed punt is not considered a fumble; however, either team can recover a muffed punt.

What is the forward fumble rule?

The forward fumble rule is a rule in the NFL that states that any fumbled ball that goes forwards within the last two minutes of play, or during a play that occurs on fourth down, can only be recovered and advanced by the offense if the recovering player is the one who lost the ball. While this rule may seem extremely niche and random, it is the result of the “Holy Roller” controversy that occurred between the Raiders and Chargers in 1978.