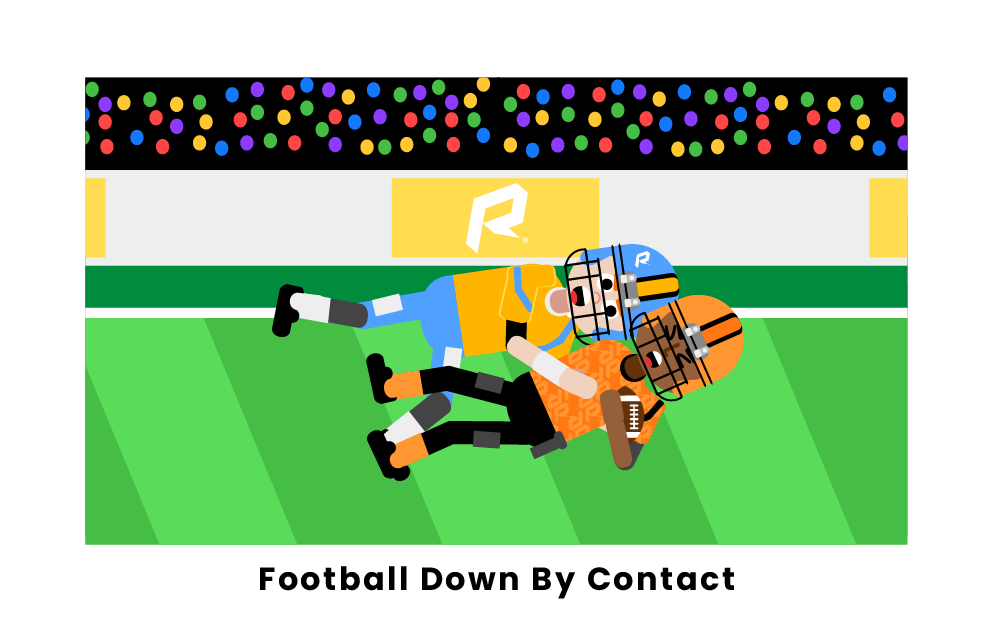 Down by contact is a ruling in football that determines whether a play is over. When a player is “down by contact,” it means that they have been tackled as a result of contact with a defender, they are ruled down, and the play is over. The rule applies to the ball carrier on a play and whether they made sufficient contact with the ground for the play to be considered dead.

There are two different ways a player can be down by contact. First, if the player has any body part other than their hands or feet on the ground and a defender makes contact by touching them in any way. The second definition is if the ball carrier hit the ground due to the action of a defender. This means that the defender pushed or tackled him hard enough that the offensive player is considered down, even if no one touched him while he was on the ground.

In the NFL, a player can stumble or trip and land on the field but the play will still be alive if a defender has not touched them. If there is no initial contact from a defender or a touch while they are on the ground, the ball carrier is able to get up and continue running.

The down by contact rule does not exist in college football, as an offensive player hitting the ground with any body part other than their hands or feet is considered down, regardless of whether they were touched.

The biggest debates regarding down by contact rulings are related to fumbles. The most common criteria officials are looking for when they review these turnovers is if the ball was knocked out before the runner was ruled down by contact. Many times, the ball popping loose and the knee or elbow hitting the ground will be almost simultaneous, and the referees will have to execute their best judgment as to whether the play was officially over before the fumble. There has been so much controversy over such calls that some coaches have even called for more review options on down-by-contact calls.

The other down by contact ruling that occurs multiple times throughout an NFL season is whether a player was down before the tip of the ball crossed the goal line on a touchdown attempt. Although sometimes this call is easier to make, when running backs or full backs dive through the linemen on a small yardage push, it is often hard to see through all of the bodies as to whether any body part illegally hit the ground before the ball crossed the plane.

When is a player down in college football?

In college football, a player is considered down when any part of their body other than their hands or feet touches the ground. In the NCAA, this rule stands regardless of whether player-to-player contact has occurred. This is a significant departure from NFL rules, which allow offensive players to trip or stumble (without making contact with an opponent) and still have the play remain live.

Can you challenge down by contact in the NFL?

Yes, you can challenge down by contact rulings in the NFL. After a referee has made their call, a coach can request that the call be reviewed. If the player in question is found to have been downed by contact while in possession of the ball, the game goes uninterrupted. If a bad call was initially made, the down is replayed.