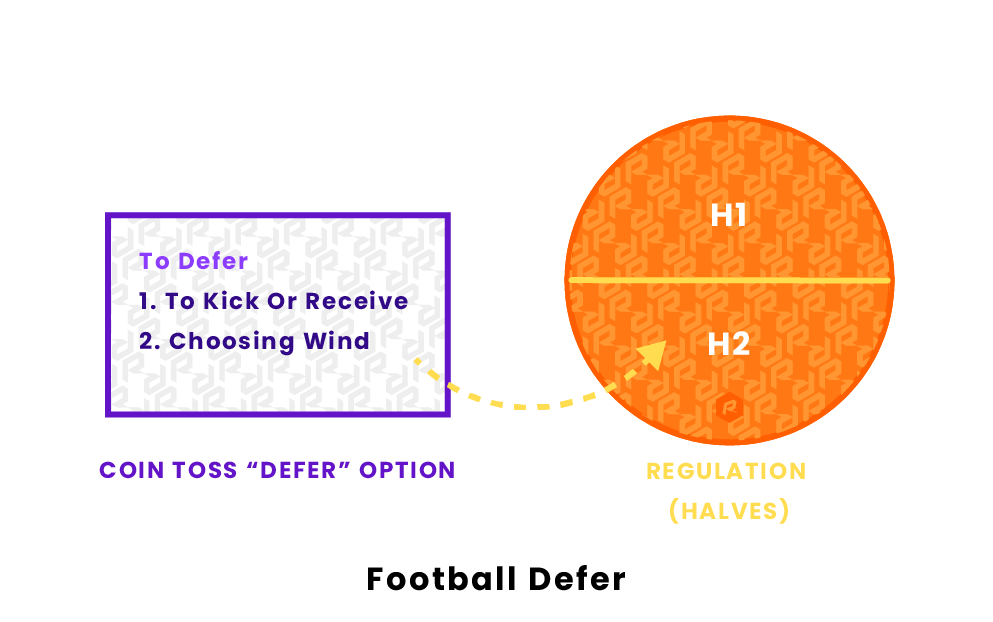 In football, a coin toss determines who starts with possession of the ball first. The head referee asks the away team captain to pick heads or tails. Following the coin toss result, the team who wins the toss has three options to choose from. They can either receive, kick, or defer. To defer in football is to withhold the decision to receive or kick until the start of the second half.

What does defer mean in football?

When a team defers the choice of whether to receive or kick at the coin toss, the other team has to choose whether they want to kick or receive first or pick the side they will play on. At the start of the second half, the team that elected to defer can either receive the ball or kick the ball to the opposing team.

If a team chooses to defer, they will almost always choose to receive in the second half. Otherwise, they would be at a big disadvantage as their opponent would receive the ball to start both halves.

To Defer Pros and Cons

Deferring the first-half coin toss is a strategy that many teams employ. While there is no concrete statistical proof that deferring on a kickoff results in more victories, many coaches still swear by it. Coaches believe that it offers a psychological advantage to have more possessions in the second half. The thought is that the more possessions a team has in the more important half (second), the better chance they have at winning. There are not many cons to deferring as you guarantee yourself getting the ball after halftime. The only con may be that the other team has the opportunity to set the tone and score first, forcing your team to climb out of a deficit early on.

To Defer in Overtime

In overtime, teams typically never defer. This is because if a team is able to score a touchdown on their opening drive, they win, and the game is over (except in the NFL playoffs). Therefore, unless the score remains tied throughout the first overtime, the deferring team will not have the opportunity to make a possession choice at the beginning of the second overtime.

There are limited reasons why a team would elect to kick first in overtime. Unless a team feels they have a better chance of stopping the opposing offense and scoring a field goal to win, it always makes sense to receive the ball if you win the coin toss in overtime.

History of Choosing to Defer

Before 2008, teams only had two options after winning the coin toss to start the game: pick the side they would like to defend or decide whether they wanted to kick or receive the ball. Therefore, if a team won the toss, they ultimately had to elect to receive. Otherwise, the other team would get the ball to start the game as well at the beginning of the second half. That would explain why 99.6% of teams who won the coin toss from 1999-2007 elected to receive the ball.

In 2008, the option to defer was added as a choice. Instead of being made to select whether you wanted to receive or kickoff, a team could save their choice for the second half. At first, most teams would often choose to receive the ball, with only 32% electing to defer in the first year deferring was allowed. However, head coach Bill Bellicheck of the New England Patriots changed the way coaches thought about coin tosses by almost always choosing to defer. The Patriots had great success this way, often able to score late in the first half and at the beginning of the second half. Now around 92% of teams defer when winning the coin toss.

Statistics of Choosing To Defer

Deferring the kickoff in football has become a norm as most teams elect to wait until the second half to receive the ball after winning the initial coin toss. Over the course of the past 13 seasons, since the option to defer was introduced in 2008, there has been a dramatic increase in the percentage of teams that elect to defer after winning the coin toss. At first, teams were still electing to receive or kick and were unsure about deferring, as only 32% of teams elected to defer in 2008.

It wasn’t until 2012 that the defer option was selected more times than the receive option. As of 2018, 92% of teams that win the coin toss elect to defer. Nevertheless, some teams still elect to receive most of the time, such as the Dallas Cowboys, who have only chosen to defer 26% of the time over the span of 2008 to 2018. Contrastly, the Patriots have elected to defer 95% of the time during that same span.

Why do teams defer in football?

Coaches may feel there is a distinct advantage to getting the ball to begin the half with the option to make adjustments during halftime, having seen a full half of the other team's defensive strategy.

Another possibility is that when a team defers, the other team has to elect to receive the ball unless they want the other team to get the ball twice. This leaves the choice of which side of the field the teams will play on in the hands of the team that won the toss initially. Therefore, instead of just getting the ball and not having a say in the direction of play, the defer option allows for teams to get the ball at half as well as decide what side they want to play on. This can be very important in games in which there is a lot of wind because teams will strategize the side they choose, making sure they are kicking with the wind in the second half.

Who gets the ball at halftime on a defer?