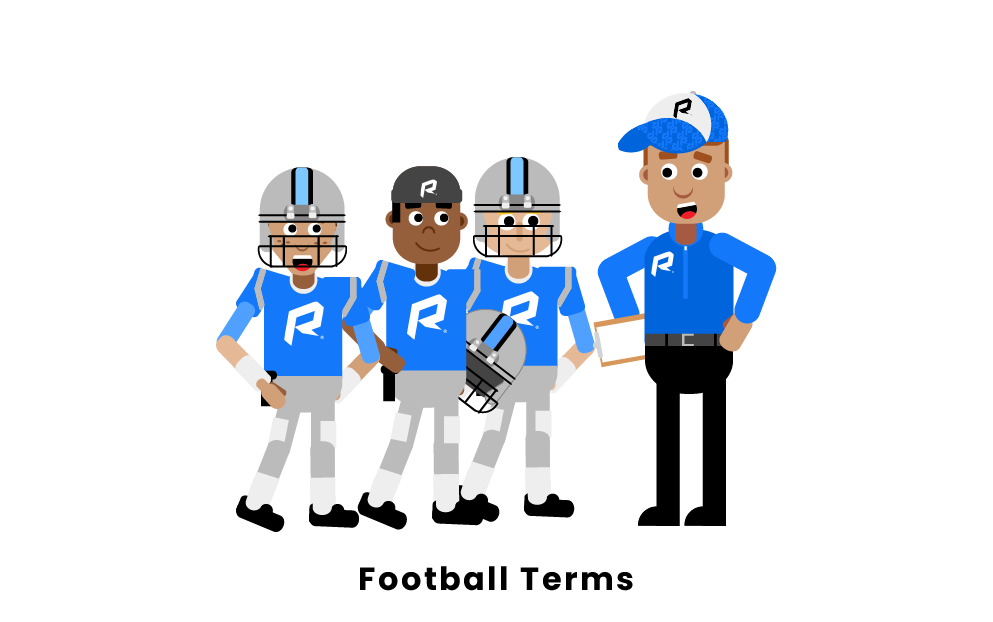 Understanding the terminology in football can be confusing. There is a lot of lingo, and all of the information builds on top of the basics. We've compiled a list of basic football terms you should know in a variety of situations.

If you're watching an NFL game, you'll want to familiarize yourself with the following terminology:

Defense: The team that doesn't have the ball and is trying to force a turnover.

Down: The stage of the game in which the ball is active and the offense tries to gain yardage or score a touchdown.

End Zone: The area at each end of the field in which teams try to score a touchdown.

Extra Point: Additional point earned by a successful kick following a touchdown by the offense.

Field Goal Range: The maximum distance a placekicker can kick a field goal.

Fumble: When a player holding the ball drops it or has it knocked out of their grasp by a member of the opposing team.

Kickoff: A kickoff is used to put the ball into play at the start of each half, overtime, and after every score.

Interception: A type of turnover that occurs when a defensive player catches a ball thrown by the offense.

Neutral Zone: An area that runs from sideline to sideline and separates the offense from the defense on opposite sides until the ball is snapped.

NFL Franchise Team: One of the 32 teams in the National Football League.

Return: A return is when a player catches a punt or kickoff and runs with it towards the opposing team's end zone.

Offense: The team with the ball that is trying to score a touchdown.

Sack: When a defensive player tackles the quarterback while he is still holding the ball behind the line of scrimmage.

Safety: When two points are awarded for an offensive player running out of bounds or being tackled in their own end zone by a member of the defense.

Scrimmage Down: A scrimmage down is one of four chances the offense has to reach the yellow line.

Snap: A snap is when the center hikes the ball back to the quarterback at the start of play.

Special Teams: One of three units of players that perform all kicks and returns in football.

Touchdown: A touchdown is worth six points and happens when the offense brings the ball into the opposing team's end zone.

Turnover: A loss of possession where teams switch from offense to defense and vice versa. A fumble, interception, and a turnover on downs are all considered turnovers.

Two-point Conversion: When a team successfully carries the ball over the goal line and thus scores two points in the extra points play right after a touchdown.

Here is some lingo that you should know if you're going to watch a football game:

Down and Distance: A term that describes the current down out of four, and the distance to the first down line.

Drive: A term that describes what the offense does when they have the ball in their possession before the turnover or score.

Encroachment: When a member of the defensive team makes contact with the offense before the ball is snapped.

First and Ten: The offense has gained a new set of downs; first down and ten yards to the first down marker.

Gain of Yards: When the offense earns more yards on the play and moves closer to the opposing team's end zone.

Kick is Good: When a field goal or extra attempt is made by a kicker, the referee's will hold their hands in the air.

Line of Scrimmage: The yard line where each scrimmage down starts. This is where the ball is placed before the snap.

Loss of Yards: When the offense loses yards on the play.

No Gain: When the offense neither gains nor loses yards on the play and the blue line stays right where it is on the field.

Pocket: When the offensive linemen surround the quarterback and shield him from danger.

QB Sneak: When the quarterback takes the ball and runs with it himself on the field.

Red Zone: 20 yards or closer to the opposing team's end zone, where a team has a high chance of scoring points.

Here are some terms about strategy and techniques used by coaches in all football levels:

Blitz: A strategy where defensive players run towards the quarterback in hopes of getting a sack and loss of yards.

Challenge Flag: An ability a coach has to challenge the previous play and a call made by an official.

False Start: A 5-yard penalty given to any player who crosses the line of scrimmage prior to the snap.

Man Defense: A type of defensive alignment where defensive players are positioned to guard specific players on the opposing team.

Strong Side: The side of the field that the offensive tight end position is on.

Zone Defense: A type of defensive alignment where defensive players are positioned on areas of the field.

What are the most important terms for watching your first football game?

The most important terms for watching your first football game are offense, defense, touchdown, and field goal. On every play, each team will play either offense (in which they try to score) or defense (in which they try to stop the other team from scoring). The two main ways to score points is to get a touchdown (by getting the ball over the other team’s goal line) or by kicking a field goal.

What is rushing in football?

What are special teams in football?

Special teams in football are the players that participate in kickoffs, field goals, extra points, and punts. They typically are players whose primary positions are on offense or defense, but also fill a role on special teams plays. Specialist positions include kicker, kick returner, long snapper, holder, and punter.

Pages Related to Football Glossary Of Terms And Definitions