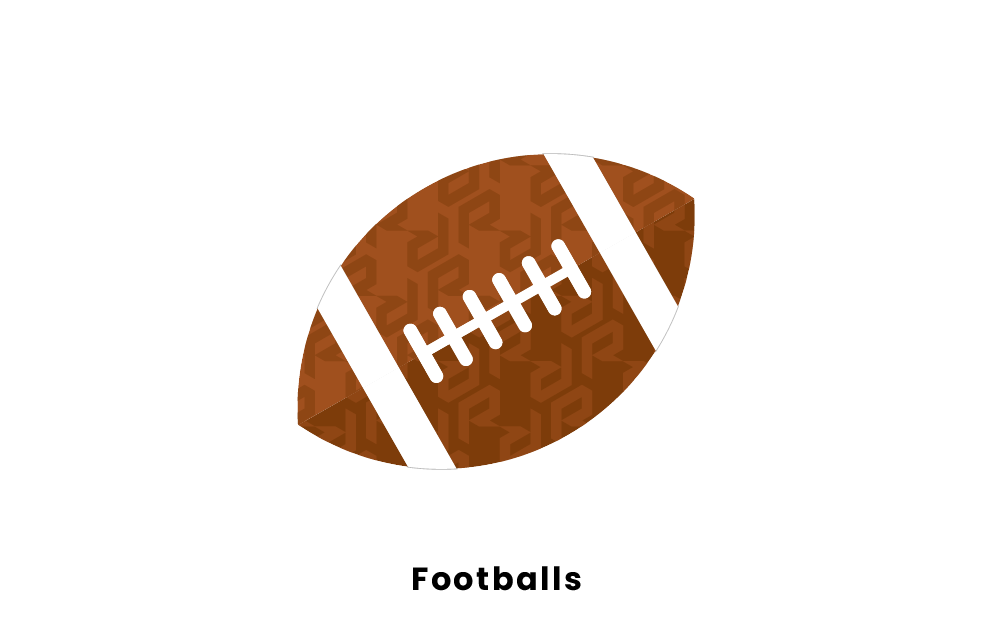 The ball used in the game of football has evolved greatly since its start in the late 1800s. This is the most important piece of equipment within football. The ball is mainly defined by its unique and recognizable shape. Different sizes and brands of football are used for different levels of play.

What are footballs used for?

The football is the kind of ball used to play the game of football. Its elongated oval shape allows for easier flight when being thrown throughout a game. This is very important, as passing is a staple of the game. The football itself is constructed using four panels of cowhide leather. However, this was not always the case. In fact, the football was originally an inflated pig bladder. Later, the football evolved into a large round shape similar to a soccer ball. This was when the game primarily used running plays, similar to rugby. As time went by, the ends of the ball became more pronounced, which is seen in the current version of the football. The laces exist on the football today to allow the quarterback to have a stronger grip. However, the laces can also interfere with the accuracy of a kicker when kicking a field goal.

When looking for footballs, you'll want to consider the following:

What are you looking for in a football?

This is the type of football used in professional football games. The length of this football is approximately 11 to 11.25 inches. The circumference on the long side of the ball is 28 inches, while on the short side it is 21 inches. All NFL footballs include the NFL logo, a printed signature from the league commissioner, and the words "The Duke."

This is the type of football used in collegiate football games. This football is very similar to NFL footballs in terms of its materials and dimensions. NCAA footballs are approximately 10.5 to 11.5 inches in length. The main visual difference between NFL and NCAA footballs are the two 1-inch white stripes that exist near the end of all college footballs.

These footballs are designed for football players age 14 or under. This ball is noticeably smaller than a professional or college football in order to help small athletes properly grip the ball. Specifically, youth footballs are available in sizes 5, 6, 7, and 8 with each size corresponding to a different age group.

Below is a table to breakdown the different sizes of footballs and their corresponding ages, weights, and dimensions.

The most commonly used and known football brands include Wilson, Franklin, and Nike.

This brand is the official provider of footballs in the NFL. Wilson offers all kinds of footballs for various levels of play including professional, college, high school, and youth. Customers of the brand can even purchase customized balls that can have 1, 2, or 3 lines of laser engraved text.

Franklin offers a variation of footballs that are meant to be used by younger players. These balls are known for their different colors and designs for youth and high school football players. The brand offers footballs with advanced grip technology, which equates to a tacky touch and deep pebble surface.

Nike offers a traditional football that comes in sizes 6, 7, 8 and 9. Their football's use synthetic leather for the best control. In addition, there are extruded laces so players can better grip the ball when passing it. Customers can purchase blue, red, or gold color variations of the ball.

Why do NFL footballs say "The Duke" on them?

The NFL football was named to commemorate a legend within the game named Wellington Mara, who owned the New York Giants. This pioneer was nicknamed "The Duke" because Mara's father named him after the Duke of Wellington. Mara was very popular among players, as he grew up being a ball boy for the team. Tim Mara, who was Wellington's father, coordinated efforts for Wilson to become the official ball supplier of the NFL. It only made sense for the footballs to highlight the popular nickname.

What brand of football is used in the NFL?

Wilson Sporting Goods is the official ball provider of the NFL. This relationship first became official in 1941. All of these footballs are designed and produced in a factory in Ada, Ohio. The factory is capable of producing 700,000 footballs per year. Specifically, the company will provide 24,960 footballs to the NFL per season for teams to use. This partnership was originally developed by New York Giants owner Tim Mara.

How do you decide what size football to get?