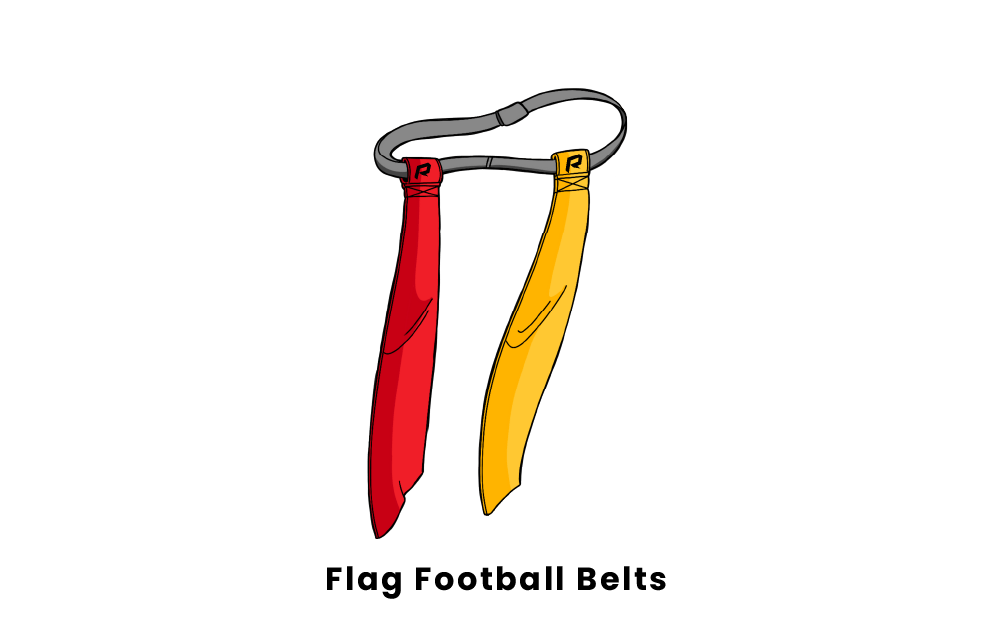 What are flag football belts used for?

In flag football, belts are used in order to rule a player as down. It is a thin fabric belt that is adjustable and wraps around a player’s waist. It will have a few flags hanging off of the belt which can either be pulled off or grabbed to release the belt. Once the flag or belt is removed, the player with possession of the ball is ruled down and play stops. Every player must wear one of these belts, regardless of their position. Different leagues will use different types of belts and there is no strict rule as to which one to use. Some belts will attach via clamps or velcro and some belts will have different release mechanisms for the flags.

When looking for flag football belts, you'll want to consider the following:

What are you looking for in flag football belts?

The different types of flag football belts include one-piece belts and multi-piece belts.

One-piece flag football belts are a type of belt where all of the pieces are attached together. When a player grabs one of the flags and pulls, the entire belt will come off. These belts are usually adjustable with clamps.

Multi-piece flag football belts look similar to one-piece belts, but have detachable flags. The flags are attached to a belt via a release mechanism which allows for an individual flag to be ripped off without the entire belt being removed. These belts are also usually adjustable.

The most popular brands that produce flag football belts include Champion Sports, Franklin, and SKLZ.

Champion Sports makes sports equipment for a wide variety of different sports. They make both one-piece and multi-piece belts that come in a variety of colors. Champion Sports also makes belts with different release mechanisms such as magnetic or velcro. Their belts have two or three flags on them.

Franklin is a brand that makes equipment for many different sports. They make mostly one-piece flag football sets and make one’s with all different NFL teams on the flags. Franklin also makes belts that come in complete sets including a bean bag for spotting and a carry bag.

SKLZ makes select equipment for a variety of different sports as well. They make a flag football set which includes 10 multi-piece belts (five belts in two colors) and some cones as well. Their belts have two flags per belt and are attached via velcro. SKLZ sets will cost around $25 after tax.

How many flags are on a flag football belt?

The most common number of flags found on a belt is three. However, some belts will have two flags and some may even have four. There is no general rule as to how many flags must be on a belt and it changes from league to league.

How do you wear a flag football belt?

Wearing a flag football belt is very simple. Each belt will have its own attachment mechanism, but most use clips or velcro. Simply wrap the belt around the waist and secure the belt so that it fits snugly. It should never be tied or tucked into clothing.

How much do flag football belts cost?

Most flag football belts will cost anywhere from $2 to $10 per belt. Most belts will come in a large quantity which will reduce the per belt price. One-piece sets are usually cheaper as they cannot be customized or individually replaced.