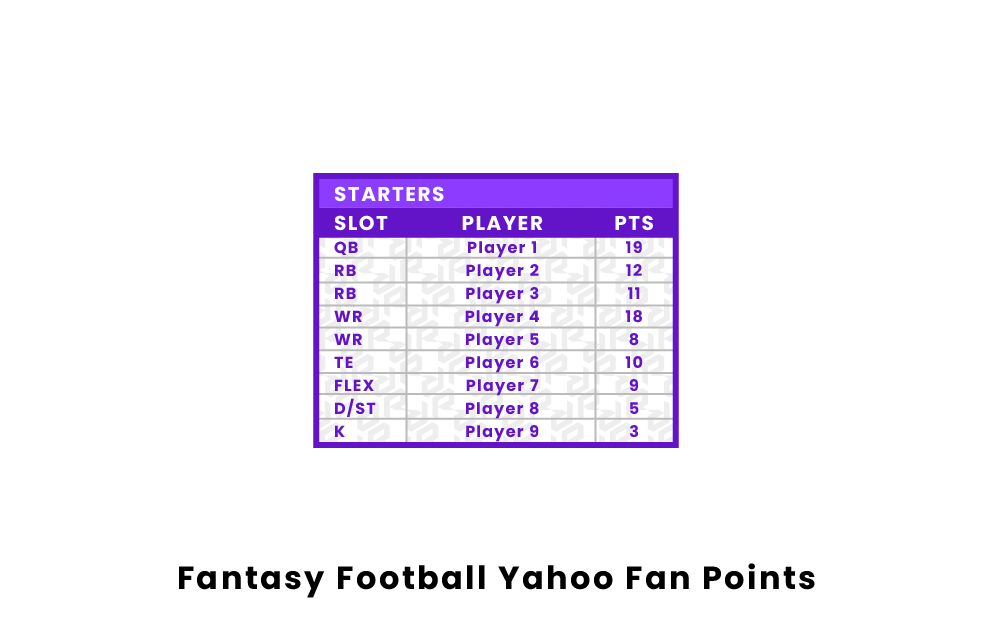 Fan points are simply Yahoo!'s way of saying fantasy points. You'll often find 'fan points' written beside the total number of points a player earned for a given week, or what they are projected to earn.

Projected fantasy points are often calculated based on past performances of a player, especially how they are performing more recently. Sometimes these calculations may also take into account the over/under bet in sportsbooks.

There are categories of scoring in fantasy football for all the different positions and types of plays that each player might do during a game. The scoring categories for Yahoo Fantasy Football are passing, rushing, receiving, defense, special teams, and kickers.

Yahoo differentiates scoring for players based on the statistics you come across during a game. Quarterbacks accrue passing statistics more than anything else. A player can earn points for passing yards and passing touchdowns. They can also lose points for interceptions thrown.

This is a statistic that is accumulated by just about any player in today’s NFL. When the sport first started, running back was the only position where players would get rushing yards. But now, quarterbacks and sometimes even receivers will be involved in a run play and get rushing yards. Players also can earn points when they get a rushing touchdown. They can lose points if they fumble the football and it is recovered by the opposing team.

Just like rushing stats, running backs and wide receivers/tight ends are the main positions involved. PPR leagues will award a player one point or ½ half point for catching a pass. Alsol, players get points for all the receiving yards they allot during the course of a game and points for the touchdowns they get in a game.

The defense as a unit can also score points in Yahoo Fantasy Football through interceptions, sacks, fumble recoveries, and defensive touchdowns. While the defense does not typically score as many points as the offense due to them only having one spot on the roster, they can still help their team by limiting offensive points and racking up points for defensive stats. The defense can also score points by limiting the opposing team from scoring. The lower the point total for their real-life opponent, the more points a fantasy football defense is awarded.

Special teams can earn points in Yahoo Fantasy Football for blocking a kick, return yardage, and return touchdowns. The special teams unit is typically grouped in with the defense in terms of positioning, and the position in fantasy football is known as Defense/Special Teams (D/ST).

Kickers earn points in Yahoo Fantasy Football by kicking field goals and extra points. The longer the field goal made, the more points are awarded to the kicker. Kickers can have a significant impact on a tight fantasy football matchup, especially if their team’s offense is having trouble scoring touchdowns.

How does scoring work in Yahoo fantasy football?

Points are given in Yahoo Fantasy Football for passing, rushing, receiving, and defensive statistics. Players earn points for passing yards and passing touchdowns though they can also lose points for interceptions thrown. For rushing, players can get points for a rushing touchdown but lose points for a recovered fumble. PPR Yahoo leagues also award players one point or half a point for a successful reception. Last, defenses and special teams units can earn points for interceptions, fumble recoveries, sacks, and keeping the opposing team’s score low.

What are fan points in Yahoo fantasy football?

Fan points is a term used on Yahoo’s fantasy football platform to refer to the points that a player has earned for a given week. These points are generally indistinguishable from fantasy points, though they can also be given for a total game instead of an individual player’s performance.

What is Yahoo fantasy football?

Yahoo Fantasy Football is a fantasy football hosting site that allows users to create, join, and play in leagues from their computer or mobile device. It is one of the most popular fantasy football websites in the world. The platform features in-depth management features and real-time news and scoring updates.