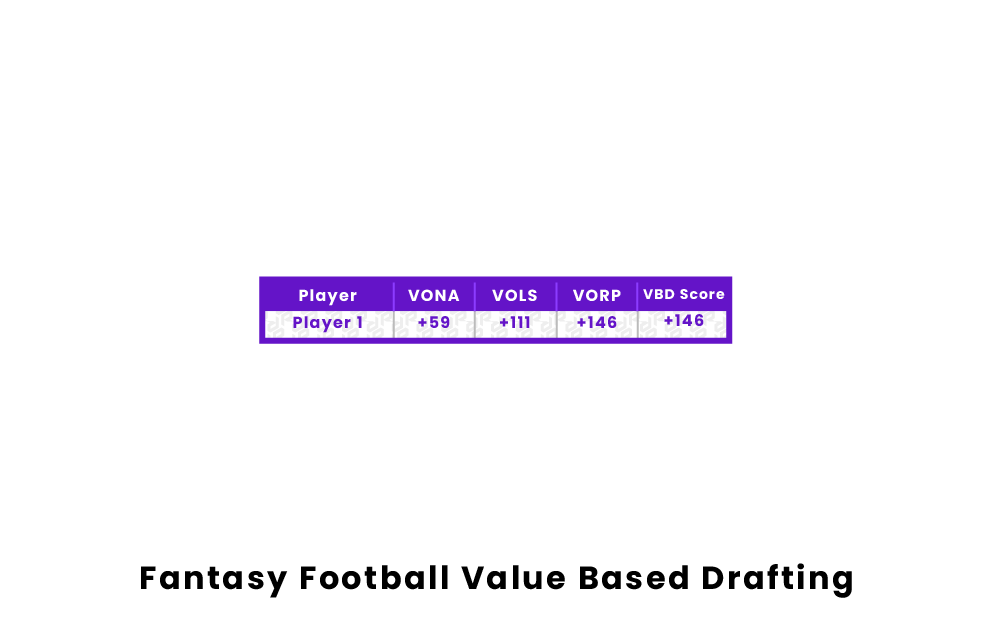 What is Value Based Drafting in Fantasy Football?

A system of drafting that takes into account a player's value more than any other statistic. VBD is a strategy that forces comparison between opponents during drafting and discourages simply choosing the best player left on the board. By specifically choosing players that will score much higher than your opponents’ players in a certain position, you are selecting the most valuable player in relation to their team.

By using the value based drafting technique, participants can gain an advantage over their competition by targeting their weaknesses. For example, if in the fifth round of the draft, a competitor notices that the best player left to be drafted is a quarterback, but their opponents all have great quarterbacks, this pick would be a waste. Instead, the competitor notices that his or her opponents do not have many great running backs. In this case, the competitor should draft the best running back available so that they can gain an advantage in that position and outscore their opponents in every match at the running back position, by a wider margin than they would have with the remaining quarterback.

There are three main criteria that go into value based drafting: Value Over Replacement Player (VORP), Value Over Last Starter (VOLS), and Value Over Next Available (VONA). VORP, VOLS, and VONA can help you determine the value of each pick you make in the draft using a VBD strategy.

The first main statistic related to VBD is VORP, or “Value Over Replacement Player.” This evaluates how much better the player you are considering for the draft is in comparison to the best player currently available on waivers. VORP was originally a statistic used in fantasy baseball, which is very dependent upon stats and replacement players. In order to understand a player’s VORP, you must compare them to a player of the exact same position who is currently on the waiver wire. VORP is calculated by projecting the number of players at each position that a fantasy league will draft, comparing projected points, and determining each player’s relative value over the others.

VOLS is the acronym for “Value Over Last Starter,” which asks how much better a player is than the worst starting player at his position. Typically, players with a VOLS Number of zero are those who would be benched.

VONA (Value Over Next Available)

VONA is the acronym for “Value Over Next Available,” or how much better a player you are considering is compared to the next available pick at that position. VONA is one of the more important VBD-related stats, as it projects the value of your current draft possibilities based upon their comparison to those players of the same position that you will likely have access to at your next pick. VONA is a good statistic to use because it helps you make real-time draft decisions. For example, VONA can help you decide to avoid drafting a player who is less valuable than a player you will likely still have access to in the next round.

How to Utilize VBD

In order to successfully utilize the value based drafting strategy, you have to have a good knowledge of the available players and their respective values. Be prepared! By knowing how well each player does and what they can bring to each team, you can easily make informed decisions that maximize the value of each position on your team in comparison to your opponents’.

As calculating the various statistics involved with VBD can be complex and time-consuming, many fantasy managers use a VBD cheat sheet to quickly make value based drafting decisions. Some people design their own using spreadsheets, while premade VBD cheat sheets are available from several fantasy websites.

What is VBD in fantasy football?

VBD in fantasy football is Value-Based Drafting. VBD is a strategy as well as a statistic that is used to execute the strategy (VBD rankings). VBD rankings are determined by comparing the fantasy points earned by a player and comparing them to the number of points earned by a baseline player at the same position. VBD, as a strategy, involves drafting the available player with the highest VBD ranking for each position. Value based drafting exploits weaknesses in opposing managers’ rosters, helping practitioners achieve favorable matchups at as many player positions as possible.

What is VORP in fantasy football?

VORP in fantasy football is Value Over Replacement Player. A player’s VORP expresses their level of fantasy points production as compared to the best-available replacement player. In a 10-team fantasy league, the best-available replacement will be the 11th-ranked player at a particular position, as presumably, the top 10 players in rankings are already on a roster. Note that the VORP calculation will change with the size of the fantasy league.